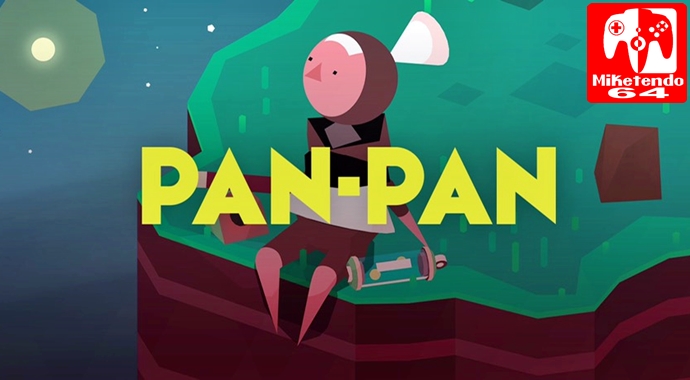 Fun fact: Pan-Pan is the name of three calls used in radiotelephone communications when there is a state of urgency on a ship, aircraft, or other vehicle but there is no immediate danger to anyone’s life or the vehicle itself. Considering that the plight of this game is due to the main character’s aircraft being grounded, it’s a clever title.

That’s good to know because despite how cute this game is, I had no idea why the title was Pan-Pan.

The gameplay for Pan-Pan is pretty simple. On the Switch, both analog sticks are used to maneuver not only the character but also the world itself. The world is comprised of puzzles that must be solved in order to repair the character’s ship and adjusting the angle of the world is key to solving many of the puzzles.

There aren’t many controls at all as you control the protagonist, the world, and then a simple tap to the “A” button allowed you to pick up things, interact with other characters and objects, and soon be able to hit things with a stick.

The stick was pretty fun, actually, as a weapon, haha! It definitely gave us a new way to interact with the environment. Many of the puzzles had to do with the environment, and odd items that you found could be the most important part of solving a puzzle.

Yes, it was pretty clever! The puzzles seemed to go in a certain order as well. You had to solve a series of puzzles just to get the stick. From there, you needed the stick to help with some other puzzles.

You also got a jet-pack a little later down the road to help you with some jumps for one of the puzzles as well. I do wish that there had been more instances where you needed a few of the tools, but it was interesting to solve the majority of the puzzles with only the environment and your brain.

Oh, yeah. I forgot about the jetpack. It was weird not being able to jump a lot of time. So, needless to say, it was great to get the jetpack!

One of the best parts of this game is the music itself. The background music is comprised of relaxing ambient sounds that keep you grounded in the world but do not disrupt your concentration when trying to solve the puzzles. The characters that you encountered didn’t speak with words — rather, they were little, curt sounds that didn’t take anything away from the world.

With the way they speak (and look), it’s obvious that this is not based on “Earth.” The music was relaxing yes, and the graphics were vivid and childlike. The map stretched as far as you walked to different biomes such as a jungle, a desert, and more.

I definitely liked the graphics — much of the environment reminded me of geometrical shapes, bringing a unique look to the game. Due to needing to switch up the angle of the world many times, I felt lost almost once or twice while playing the game, but it was a fun world to explore.

The geometric shapes is a good way to explain it. It was definitely well done to say the least. I think my favorite part was the way the map came to be as you explored more.

I enjoyed that as well, although my thoughts tended to fall a little more to the pessimistic side, wondering if the map would reveal some sort of big enemy or boss. Instead, we found more charming scenery along with new clues and items to use to get through the puzzles.

There wasn’t much of a “story,” per se. The characters didn’t speak and there was no narration in the beginning. All we see is Pan-Pan’s airship crash down and then we have to help him fix it. In a way, it reminded me a lot of Pikmin. However, we don’t know where Pan-Pan was coming from, where he landed, or where he was trying to go.

The gist of the story seemed to be just that — fix the downed ship to rescue yourself from being stranded on an unknown planet. It did share a vibe with Pikmin, especially how the main character needed to find various batteries, if you will, to ensure the ship can fly again. It was simple to understand and execute.

That pretty much sums up the game. Short, sweet, and simple. And it was great.

We beat the game in about two and a half hours. We were a little surprised at how short the game was, but it was satisfying to see the results of all our puzzle-solving so quickly. It seemed to be fairly linear with the order of the puzzles that needed to be solved, but the puzzles were clever enough that you could probably forget them enough to play it again in the future.

I do  wish there was more to it. I wanted more of a solid story and especially more puzzles. But it was short and sweet and I can definitely see myself playing it again at some point. Maybe there will be more Pan-Pan games in the future!