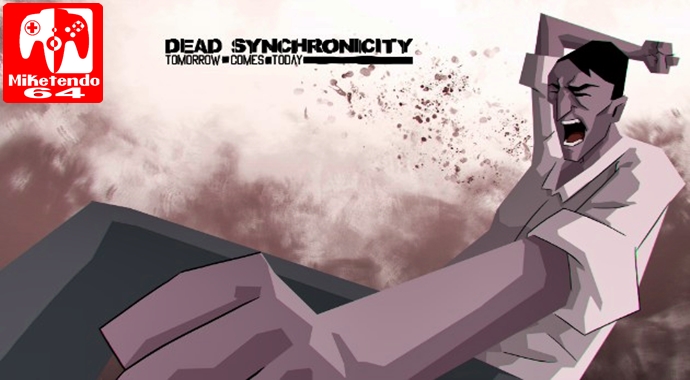 From bizarre games to downright incredible games, the Nintendo Switch nearly has it all and now, the critically acclaimed dystopia Dead Synchronicity is also headed for Switch and you can read all about it right here:

(The dystopian, critically acclaimed adventure will arrive on Nintendo hybrid console, after making its appearance on Steam, PlayStation 4, iOS and Android)

Madrid, SP, October 4th, 2017: Fictiorama Studios announces the launch of its dystopian adventure game Dead Synchronicity: Tomorrow Comes Today for Nintendo Switch. The game is getting ready for its launch on Nintendo hybrid console after making the rounds on Steam, PlayStation 4, iOS and Android. Featuring a dark, atmospheric storyline set in a dystopian future, Dead Synchronicity’s many plot twists, German Expressionism-inspired 2D art, and witty dialogue are sure to enthrall adventure fans.

Published by BadLand Games, Dead Synchronicity tells the story of Michael, a man with no past who must recover his identity and decode the two events that brought the world to the edge of collapse. The first is the so-called “Great Wave,” an inexplicable chain of natural disasters. The second is a pandemic that has turned humans into “the Dissolved,” infected beings with special cognitive powers whose sick bodies will eventually dissolve into blood. If Michael doesn’t hurry, he won’t be able to avoid the impending moment of “dead synchronicity” … when time itself starts to dissolve.

Dead Synchronicity pays homage to classic adventure games and shows an adult storyline and modern mechanics, appealing to both new gamers and old-school lovers. Solve each puzzle to get closer to the truth, guiding Michael to a future he may (or may not) be ready to face in this disturbing addition to the adventure genre. The game’s original soundtrack was composed and performed by indie rock band, Kovalski — which consists of Nayra Garcia (bass / keyboards), Mario Oliván (lead guitar), and Alberto Oliván (voice, composition and guitar). Formed in 2007, Kovalski’s sound is influenced by ‘70s orchestral rock and Italian Giallo soundtracks, and it’s intensely linked to Dead Synchronicity’s plot and art style.

“We want adventure fans to experience a terrifying future brought forth by a series of world-ending cataclysms in Dead Synchronicity,” says Luis Oliván, producer and public relations manager at Fictiorama Studio. “They better be prepared for an intense, unnerving experience that explores primal fears, lawlessness, and the depths of human nature.”