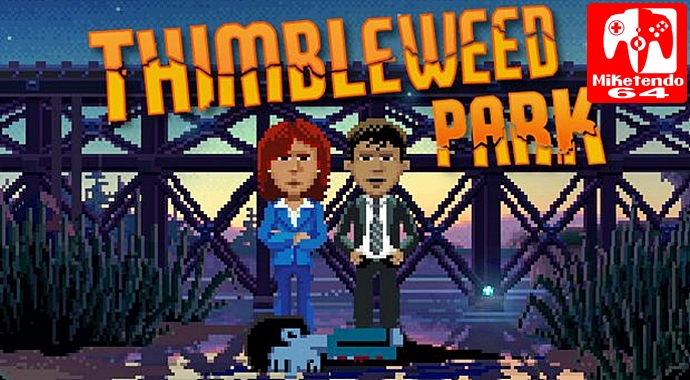 If you have ever thought to yourself about how much you’d like to play a game that is Twin Peaks meets The X-Files meets Monkey Island, then guess what? You’re in luck!

Developed by Ron Gilbert and Gary Winnick, a point and click adventure that acts as a graphical novel, with the style of a game made in the 80’s and lives up to the mash-up stated in the above paragraph, is now available on Nintendo Switch and its name is Thimbleweed Park. It may have taken it’s time to show its face on Nintendo’s multipurpose console (home console meets handheld,) but it’s here, it’s out now and it is just as good as it was on any other platform. Actually that’s a bit of a lie, as it is way better on Switch!

Why? Purely for the simple fact that Thimbleweed Park can be played as a home console title, on your big TV with your Pro Controller, moving analog sticks and pressing buttons to input actions, use verbs and interact. Or you can remove the Switch from its dock, play the console in the palm of your own hands and speed things up drastically by the touch of your own finger. Thimbleweed Park makes full use of the Switch’s touch-screen controls and as such, your experience can progress at a much faster and smoother pace gives the game a much better feel since it is a game that “starts” with a dead body and Mulder and Scully roll into town to investigate.

Okay they’re not the actual Agent Mulder and Agent Scully, as their Agents Reyes and Agent Ray and they didn’t even arrive together, but they’re agents assigned with the duty of solving the murder, whilst being motivated by their own goals since the game only released this year, I’m not going to spoil what those goals are. But let’s just say while things start with a body, as part of a simple case where you just need to follow the evidence and close the case, simple is not how things remain.

Thimbleweed Park is no normal town, it has lots of unusual characters (80,) with one of them being Ransome the “Beeping” Clown, a very insultive clown whose penchant is to abuse others and recite plenty of words that end up being replaced with Beeps and Beeping. The best thing about him though, is he is actually a character you will get to play as thanks to plenty of flashbacks that enable the player to play as other characters, so don’t think you’re just limited to playing as Agents Ray and Reyes because there are others (3.) Oh and if you’re the kind of player who likes to stick to one single character, you’ll have to knock that notion on the head as some of the game’s puzzles will require you to use both characters. (One example is when you need to use both Agents to get a certain Journalist to leave her post so you can photograph her map of Thimbleweed Park.)

Only various unusual characters aside like a Sherriff who adds “a-reno” to everything he says, a Coroner who adds “a-who” and a Hotel Manager who has a notable “a-boo,” although it is a game that plays like most point and click games you have experienced in the past, it’s story does get better the more time you invest into it as all mysterious it has to offer, eventually unravel in rather interesting and exquisite ways, but you have to stick to it. You have to keep playing no matter what and while the puzzles at time can prove to be a little too frustrating, there is a hotline you can call to help you out. In-game you will come across plenty of posters that give a phone number, which you can call in-game to help you out anytime you desire.

The downside to this though, the helpline can be a bit vague at times, so you might have to call it more than once just to get a better idea as to what is going on, as doing so will provide you with more clues, but even when you call it three times, it can still be vague, so although it simplifies things for you, it can still be a tricky little ditty. Nevertheless though, when given the opportunity, Thimbleweed Park can be a hilarious piece of work if you let it, as every conversation has optional dialogue and if you pick the lines that make no sense, hilarity can and will ensue and if you don’t laugh, you might want to go and see a doctor because there might just be something wrong with you.

As much as it tries to be at times, Thimbleweed Park is not a game for everyone as point and click games aren’t genuinely for everyone, but Thimbleweed Park is a point and click with a difference. It is not my cup of tea and I can admit I didn’t enjoy it as much as I thought I would, but it has appeal, it has a certain style to it and it can differently be a great game to those love this type of thing, but this time around, I am just not that someone, but Switch is without a doubt the best console to play Thimbleweed Park on, so that alone merits a huge tick!