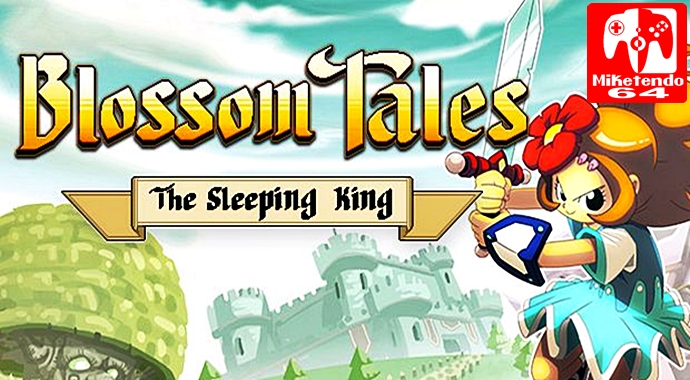 Blossom Tales: It’s Coming to Nintendo Switch and There’s a Good Reason Why!

When it comes to Switch, there really is no shortage of great indie games being announced for it and when FDG Entertainment turned round and decreed Blossom Tales would be getting the Switch treatment, I flew out of my chair!

Having played the game on Steam, I already knew it was good and often dreamt a Switch port would happen and I wasn’t alone in such desire, A lot of us wanted it to happen and FDG Entertainment clearly heard us because Blossom Tales for Switch is in the works and now that things have died down for the company just a little bit, I felt compelled to get in touch and see what I could find out about the Switch port.

I may not have asked a lot of questions, as I limited myself to 4, but 2 of the answers are just downright awesome, so here’s the whole quick Q&A with FDG Entertainment’s Philipp Döschl:

Despite the obvious reason why (huge fan demand,) why are you bringing Blossom Tales: The Sleeping King to Nintendo Switch and why as a console exclusive?

“Given the nature of Blossom Tales we always had the feeling it’d be at home on a Nintendo console. This being said, Switch has quickly become our personal favourite gaming platform, as it’s perfect for how games are ‘consumed’ nowadays. You can play anytime and anywhere, play for 5 minutes or 5 hours, it just doesn’t matter. Switch is very hot right now, so it feels natural to support this platform.

As for the exclusivity, due to the ongoing development of Monster Boy we have to be very focused on what we do and where we put our resources. Also, the experience we gathered with Oceanhorn clearly shows which platform has the best cost-value ratio.”

Given the Zelda-like aspects to Blossom Tales, and the game now being an exclusive port to Switch, have you considered appealing to Nintendo to incorporate amiibo support in any way? Such as making use of certain Zelda amiibo to bring over some Zelda tie-ins to Blossom Tales, much like Bethesda’s Skyrim will do later on this year?

“This is very unlikely to be honest. I personally love amiibos. We didn’t check how much of a deal it is to implement amiibo support, but I seriously doubt that this is something that can be achieved within a few days. My guess is that so much has to be planned, changed, reworked, implemented and tested that it easily takes 2 months just to support amiibos. This comes on top of the porting we have to do anyways.”

With a Switch version being in the works, will it feature any particular Switch features or Switch exclusive content?

We’re looking into a few things we could support, such as HD Rumble, but we don’t know yet. What’s safe to say though, is that the Pro Controller will be supported.

Lastly, what will come to Switch sooner, Monster Boy, or Blossom Tales?

Granted it could be a few months before Blossom Tales does make its long awaited Switch debut, it is in the works, it is coming along nicely and it’s an exclusive port for a very great reason and is without a doubt a Day 1 must buy when it eventually hits the eShop. But should you need some convincing, maybe this trailer and game overview can help you with that:

A delightful mix of “Zelda” and “Princess Bride”, Blossom Tales’ narrative will unfold in the form of a fable being passed down from grandfather to grandchildren. Unable to resist their adorable plea, the old storyteller weaves a tale in which Lily, a heroic girl becomes one of the esteemed Knights of the Rose. However, that same day the evil wizard Crocus places the King into an everlasting sleep with one of his dreaded spells, forcing Lily to go on a grand quest in search of a remedy. Drawing inspiration from the beloved top-down adventure games we grew up with, Blossom Tales is a refreshing combination of classic Action-RPG gameplay and modern design. Players can expect a one-of-a-kind experience as they explore hand-crafted dungeons. The young Lily and her brother Chrys will also keep players on their toes by occasionally introducing enemies, story events, and more as they help their Grandpa tell the tale. Featuring a vibrant world to get lost in, challenging quests to complete, and memorable characters to meet, our hope is for players to feel as though they’ve been transported back to the glorious days when pixelated visuals and chiptune music captivated us for hours on end.

Once again Philipp, thank you for your time and your answers!