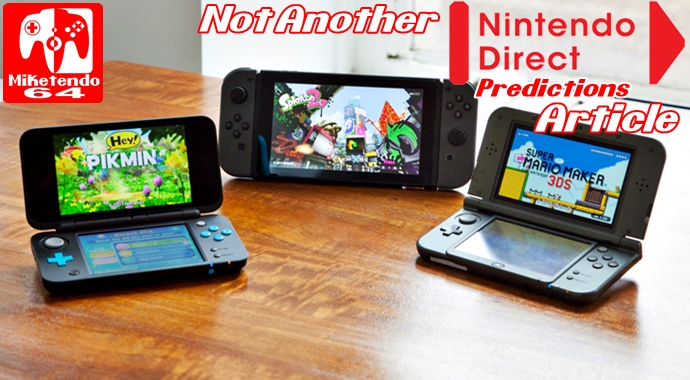 Hey guys, this is Jack here, aka “Miketendo64’s Manical Overlord” and I thought I would treat you to something a little different.

Given the quantities of articles that have been shared the last couple of days that all pertain to predictions for today’s Nintendo Direct, I decided “let’s not do that.” We already know we’re going to see more shown off about the confirmed games for Switch and 3DS, as well as learn some release dates for certain games and have the occasional surprise or two, but let’s keep it like that, a surprise.

Every time a sizable Nintendo site does one of their lists, some of their readers read the list and build their hopes up on what was send and then when Nintendo doesn’t give them what they want, some readers spout hate in Nintendo’s direction, which is just unnecessary, so let’s cease all talk about the Nintendo Direct. Toss our expectations out the window and go into the Direct the way that we should go into one and that is one hand filled with excitement and the other filled with dread. So to pass the time until the show kicks off, how about we kick it with a minor written Miketendo64 Direct and I reveal to you the few things we have planned for this month instead?

First and foremost, while our ongoing League Of Evil giveaway on Twitter is set to end on the 15th of September, I can reveal our next large scaled Switch focused giveaway will concern 36 Fragments of Midnight by Petite Games and Ratalaika Games. It may not have scored all too high in our review, but it can be a nice game to those willing to give it a try and that’s why next week, on the 18th of September we’ll be getting our 36 Fragments of Midnight giveaway underway and we would love it if all who read this, would care to enter.

However, before the 36 Fragments of Midnight giveaway does begin, we are also currently hosting a small Slime-san one on Twitter with just 1 NA Switch code up for grabs and the winner will be decided on September 16th but there is also an ongoing Power of Two giveaway in effect as well and the details for both, can be seen via the link and tweet below:

To be in with the Chance to win 1 NA key #SlimeSan: for yourself or a friend: RT, Follow & comment 3 Indie games you've brought for Switch. pic.twitter.com/ZSiHxtJ7CU

In terms of new original content and a possible Theme Week for this month, there really isn’t going to be much in the way of that, as we are all so swamped right now, so even our usual Interviews will not be happening this month, but a Super Mario Theme Week is currently being planned out for next month, and we have not yet ruled out the thought of throwing an impromptu Pokkén/Pokémon Theme Week, to tie in with our forthcoming Pokkén Tournament DX review, although the latter Theme Week might just not happen at all.

However while we may fail you guys in regards to Interviews and Theme Weeks, we do have a whole load of Reviews planned for this month that we hope will make up for the lack of our original content and all the reviews I’m about to list below, are all currently in the works and we’re trying to get them out just as soon as we are able to:

*Huge thanks go out to all the Devs and Publishers who supplied us codes and physical review copies for the games our teeth are currently sunk into.

It may not be the kind of content, we hoped to supply you with this month, but with so many of us on break and others just completely run off our feet, those of us who are manning the helm are doing our utmost best to make sure there’s something you can enjoy and read.

Thank you for reading, and I hope you enjoy tonight’s Direct as much as I do!