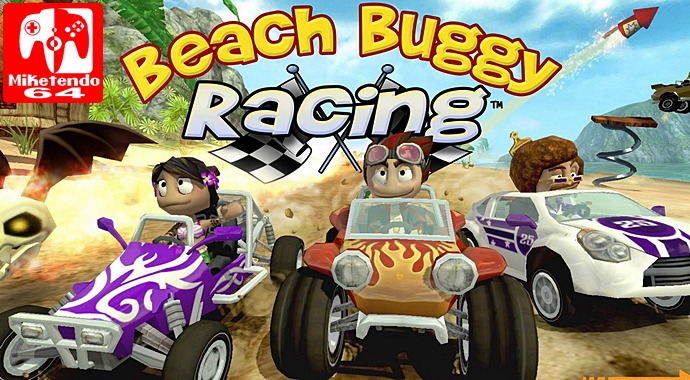 For the fans who love a good racing game but couldn’t bring themselves to get Mario Kart 8 Deluxe and FAST RMX for their Switch, after already owning the Wii U counterparts to both games, than not to worry, for Vector Unit has you covered!

Developed and published by Vector Unit back in 2014 as a sequel to Beach Buggy Blitz, Beach Buggy Racing is the latest racing game to race its way to the eShop for Nintendo Switch and right off the bat, it’s really not as bad as people think it is. Granted the graphics might not be all that, which is an easily noticeable fact for anyone who checked out Beach Buggy Racing’s eShop listing, I have found that the more you play Beach Buggy Racer, the more the game’s controls, visuals and characters grow on you. But in order to reach said point, you really will need to invest some serious time into it and for what it’s worth, it does actually look better when played in TV Mode.

For anyone who is not yet put off by Beach Buggy Racing for Nintendo Switch just yet, the best way to possibly describe it is to by saying it is a full on indie alternative to the Mario Kart games. It may not have as many playable racers as the MK series has, as BBR only has 10, which is more than the previous game had, but it is an indie game that comes across as trying to be the next Mario Kart game, only it isn’t and it’s wrong of it to try. I don’t hate Beach Buggy Racing as I actually do rather like the game and the quantity of content it has, but in my mind, it spends so much time trying to be something else that it feels like it has given up on trying to establish itself as being something different, or even itself.

Then again that might just be down to the fact that back during the Beach Buggy Blitz days, BBB was a racing game where you simply raced against a clock, whereas its sequel allows you to do battle in real-time against CPU and human controlled racers. Still, being a game that whether or not it does intentionally follow in the footsteps of the Mario Kart games, it has a lot of similar features to the iconic franchise and is most similar to the latest Mario Kart games. There are various vehicles to use, 27 fun and funky random items positioned all over a race track and various cups and that for players to try their hand out and become the champion of. (There’s also a blue shell like item called Death Bat that will take out “the guy in first place,” as well as whoever gets in the way. But shhh! You don’t need to know that.)

There is also a road/path you must follow, as going off-road will result in you slowing down because of rougher terrain, which is a contradictory fact given how the game is described as being an off-road kart racing game and for anyone who really likes to go so far off-road you’re out of bounds, you can do that in BBR, only it’s not a good thing and by the time you respawn back on the track, you’ll most likely find yourself in 6th (aka last) place. Still it’s not just the simple going off-road a little longer than you should that can cost you a race, it’s the simplest of crashes or an item wipe-out and spoiler alert, some of your own whacky items can and will take you out if you’re not careful.

Additionally you might just end up losing purely because you’re using a terrible underperforming vehicle, which means it’s either time to swap out for another vehicle, or just upgrade its stats via the coins you get from winning the usual kind of races and event races like elimination.  Just don’t level up the stats too much too soon, because if you level them all up and upgrade its class from 250 HP to 500 HP, you will not be able to use that vehicle in any 250 HP race circuit such as the Chowder Bowl series, but you can use it in the Championship races. But yes, never level up your vehicles class until you have obtained every available star in a HP set race series, or at least have another vehicle you’re happy enough to use instead.

Although if getting every star and achievement is not your desire, of which there are many, you could always just focus on unlocking each and every race, which is done by beating them on a one-on-one race on the last level of every series and just in case you actually need a reason to do so, not only do each character have their own hilarious bio, but they also have their own special Skill that is activated with the X button and can only be used once per race.

Three great features about Beach Buggy Racing though, is 1, the fact that there are Daily Challenges for anyone wishing to challenge themselves by playing as a character they wouldn’t ordinarily play as in a vehicle on one of the game’s 15 available courses. 2, it’s actually a great multiplayer experience when played in TV Mode, with single Joy-Con supported, but 3, your cars can be customised. Want a buggy in a certain black colour, with a white crossbones pattern to create your very own Pirate-like vehicle? If you’re answer is yes, Beach Buggy Racing is a game that will let you do just that and that is a plus in anyone’s book.

Still, despite all the positives and the time I devoted to this game, the thing that I do actually despise about this port though, is the fact that there are no touch-screen controls. A power slide and better graphics I can easily do without, but mere touch-screen controls would have benefited Beach Buggy Racing a whole lot as it would have sped up the process of changing characters, vehicles and let’s not forget menu navigating. As a game that released on mobile devices, touch-screen controls were already there once and worked great, but here with the Switch where they’d work even better, they’re just not present and even though I am well aware of this fact, because of the appearance the game’s various menus have, I still find myself trying to select something with my finger, only to once again not have it work in the way I subconsciously think it will.

Beach Buggy Racing may not have the high quality visuals Mario Kart 8 Deluxe has, or even be as well polished as the AAA title, but the undeniable truth here is, it is a indie alternative to Nintendo’s established Mario Kart series. Yes it is a pale imitation of the franchise, but believe it or not, not everyone likes Mario Kart and those who don’t, might just be those who love Beach Buggy Racing, which is hands down a much more affordable alternative. However, although it is not a bad port, Beach Buggy Racing does make a better mobile racing game than it does as a home console game, but I would love to see what Vector unit does with this series next.