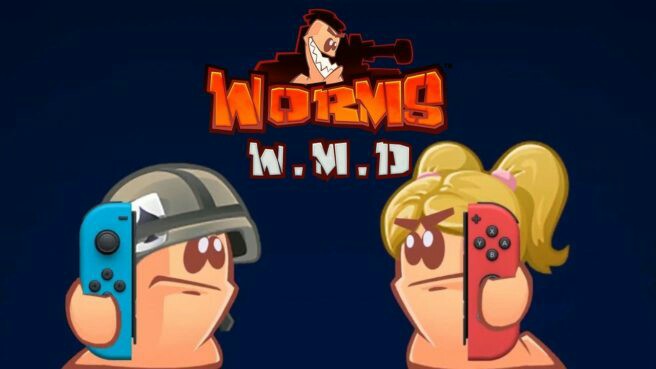 After the news that Worms W.M.D is coming to the Nintendo Switch. Team 17 have issued an official announcement along with a trailer showing what new features are coming in the Switch version. There is a new “Space” theme along with two new forts, “Mushroom” and “Tree House.” Check out the official Announcement below along with Worms W.M.D Switch trailer.

You asked for it and now you’re getting it! The Worms are getting ready to battle anytime, anywhere as they invade Nintendo Switch later this year in Worms W.M.D. With a gorgeous, hand-drawn 2D look, brand new weapons, the introduction of crafting, vehicles and inhabitable buildings, plus the return of some much-loved classic weapons.

In Worms W.M.D for Nintendo Switch, you’ll be able to embrace the full Worms experience with all the game’s campaign missions, levels, customisations and updates with over 80 weapons and utilities at your fingertips. These include our Liberation theme and campaign update as well as the much requested, fan favourite Forts Mode! But wait, there’s more!

The Worms have called in a crate drop that’s landing on Nintendo Switch first, jam packed with a megaton of brand new content. So dust off your Bazooka and prepare for: – A brand new theme – Space! – Two new Forts – Mushroom and Tree House. – New customisations including three new outfits and three new gravestones to mourn the passing of your portable invertebrate pals.

The Worms’ greatest minds have been working away furiously and are excited to share that Worms W.M.D for Nintendo Switch includes support for single Joy-Con play, local wireless multiplayer as well as hot seat, local and online multiplayer.

So wherever you are, whoever you’re with, the time has come to saddle up your Concrete Donkey, polish your Holy Hand Grenades and re-cape your Super Sheep as you prepare to rain hell upon your friends (and enemies) later this year!