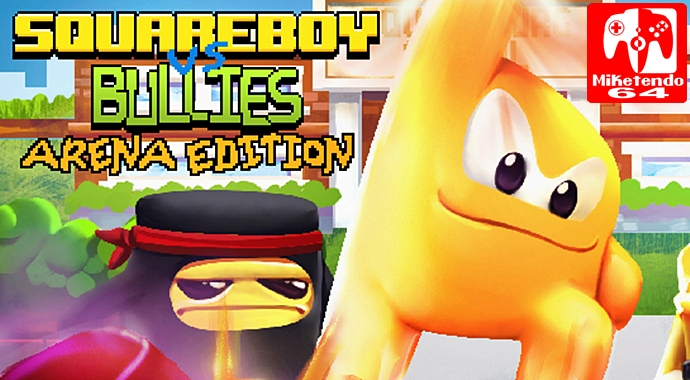 While more and more indie games are finding their way to the Nintendo Switch, there are plenty of other games making a beeline to the 3DS and with the mobile title Squareboy vs Bullies, having been recently revealed for 3DS and PlayStation Vita, we felt like catching up with its developer to see what we can learn about it and here is how we got on:

Rohan Narang: My name is Rohan Narang and I’m a solo independent game developer based in India. I’ve been making games for almost 7 years now and I’ve mainly focused on game development for mobile platforms.

I had originally developed and launched Squareboy vs Bullies on Android and iOS back in late 2015. Being a solo developer I was responsible for all aspects of the game, like story, design, graphics, programming, sound etc.

For the 3DS version of the game I’ve been working with Ratalaika Games and they are helping me with parts of the game’s design, which will make it suitable for consoles, and will also handle the porting and publishing part of it.

Squareboy vs Bullies in a Nutshell:

Rohan Narang: Squareboy vs Bullies is a game about standing up to and fighting off bullies. It is a single player beat ‘em up where the character traverses a 2D side scrolling level, composed of zones populated by enemies. The story mode of the game will have 12 levels spanning different urban locations.

The Decision to bring Squareboy vs Bullies to 3DS:

Miketendo64: Being a game developed for mobile devices, what prompted the decision to bring Squareboy vs Bullies to the Nintendo 3DS in the first place and how have you found working with Ratalaika Games?

Rohan Narang: While the game was originally made for mobile, it is actually much closer to a traditional console game. The game requires D-pad and face button inputs, which were done using an onscreen virtual controller for the mobile version. While many of the design decisions of the game were made with the mobile platforms in mind, some of the initial feedback I received for the game suggested that it would work very well for platforms that provide a physical controller. When I first got in touch with Adrian from Ratalaika games, we both discussed about the possibility of having a console version of the game, and we both agreed that the game has potential on a portable console.

Working with Adrian and Ratalaika Games has been a very good experience for me so far. While Nintendo has made it considerably easier than before for indie games to get onto their platforms, there are still some barriers to entry which keep smaller devs like me out. This is where I find working with Ratalaika Games will be the most beneficial for me, since they’ll be publishing the game. Having a game on a Nintendo console is a dream for a lot of game developers, and I feel very fortunate that I’m getting a shot at achieving this dream working with them.

Besides this, I feel like I’ve gotten valuable first-hand experience of the business and technical aspects of game development for the 3DS, which wasn’t possible for me before, being an indie mobile developer.

Squareboy vs Bullies Highs and Lows:

Rohan Narang: The best moment for me has to be when Adrian first sent me a photo of the development version of the game running on a 3DS. It was very rewarding seeing the game run on a Nintendo device. The only thing that can now top that is if people like the game as much as we are enjoying working on it.

Fortunately there hasn’t been a bad moment for me working on the game so far. We’ve had our share of technical issues, but that is all part of regular development work.

Miketendo64: Since Squareboy vs Bullies was a game made for mobile devices, can we expect to see any of the mobile features carry over to 3DS and will the 3DS version have any unique aspects like extra content and features?

Rohan Narang: The mobile version of Squareboy vs Bullies was made with the touch screen and the limited screen estate in mind. The 3DS isn’t bound by these same limitations, and we plan to improve the gameplay and the design accordingly.

As an example, the mobile version has a fixed resolution for the game scene (160×144) and the rest of the screen estate is used for the controls, but the 3DS version will be making use of the entire screen to show more areas of the scene. The second screen of the 3DS will have touch based UI for the menu screens, and a stats and combo display during gameplay. The new version will also have an Arena mode which works as an endless survival test, where the player needs to defeat as many enemies as possible.

We plan to retain the achievements and leaderboards feature, from the mobile version, and tweak them to suit this version of the game.

Miketendo64: With chiptune music and a retro look going on what with the pixel art graphics, what prompted you to work in this particular style as opposed to something more modern for Squareboy vs Bullies?

Rohan Narang: I have been playing video games for many years now and I still find myself going back to my favorite classics from the NES and Gameboy eras. I try to emulate those same production qualities in my work as a way to show my love for the games of that time. While I have experimented with different art styles I personally have a bias in favor of pixel art.

From a practical perspective, the major advantage of pixel art graphics is that they are easier and quicker to make compared to something like 3D textured models. This is important if you are a solo developer like me because it helps you keep your production costs and time down to a minimum, which can then be redirected to other important aspects of game development.

While not necessarily easier to produce than the average music track, the chiptune style of music works really well with the pixel art graphics to deliver a complete retro feel. That is why I chose this music style for Squareboy vs Bullies.

Jack N’ Jill Will also come to a Nintendo platform provided Squareboy vs Bullies does Well:

Miketendo64: Depending on how Squareboy vs Bullies goes for the 3DS, would you work with Ratalaika Games again to bring another of your titles like Helm Knight 2, to a Nintendo platform?

Rohan Narang: If the game does well, we will definitely work together again to bring my other titles on to Nintendo platforms. We’ve both discussed the possibility of porting my most popular game, Jack N’ Jill, to the 3DS. Helm Knight 2 probably won’t see a Nintendo release.

Squareboy vs Bullies sequel has been Considered:

Miketendo64: Given the interest and feedback Squareboy vs Bullies got when it came to mobile devices, has there been any consideration to developing a sequel or even a spiritual successor? Also since we’re talking sequel, are there any plans for a Helm Knight 3?

Rohan Narang: People who enjoyed Squareboy vs Bullies have asked me before if there will be a sequel for it. I have thought about it as well, and noted down some ideas for a possible sequel, but haven’t done any serious work on it yet. If the reception of this version is good I’ll definitely be working seriously towards a possible sequel.

Although I’ve considered a few different ideas for it, there aren’t any plans for a Helm Knight 3 It all depends on if I can come up with a compelling idea that I personally like and feel that people would also enjoy.

Squareboy vs Bullies should Come to 3DS in September/October 2017:

Miketendo64: Since no release date was given when you revealed the 3DS port of Squareboy vs Bullies on Twitter, how is the game’s 3DS development progressing and can you give a rough idea as to when we can expect to see it released?

Rohan Narang: A major portion of the development of the game has already been done, but there are a few important things that we still need to take care of. We’re hoping to release the game sometime around September or October.

Squareboy vs Bullies Will also be Coming to other Platforms as well, such as PlayStation Vita and Switch is a Possibility:

Miketendo64: Other than 3DS, is Squareboy vs Bullies planned for any other platforms such as PS Vita?

Rohan Narang: Yes, we are working on a PS Vita version of the game. We’ve also planned to release a PC version through Steam and the Humble Store.

Miketendo64: Fair enough and s Since Ratalaika Games do have a Switch dev kit and a number of games in the works for it, has there been any talk of bringing Squareboy vs Bullies to the Nintendo Switch?

Rohan Narang: We have discussed the possibility of having a Switch version of Squareboy vs Bullies and we both agreed that it would be better that we first focus on the current version of the game. We’ll be seeing how the game performs on the portable platforms and then take a decision about this. So, as of now there are no plans of a Switch version, but there is a possibility that it may happen.

Rohan Narang: Being my first game on a Nintendo platform, I don’t think many people from this world of gaming may be aware of my work on the mobile platforms. However, to those few loyal supporters of mine, who may also own a 3DS, I would ask them to give this upcoming version of Squareboy vs Bullies a shot, as it will have a lot of new additions which will make it superior to their favourite mobile version.

I really appreciate the continued support from all the people who’ve played and enjoyed my work. It has allowed me to continue pursuing my game development ambitions.

Rohan, we wish you the best of luck with your forthcoming release. We may not have played the mobile version, but we will definitely go hands on with the 3DS one when it comes out this year! As for our readers, Squareboy vs Bullies is not a simple port, as like the name suggest, there is more content in the form of an added Arena, so if the game wasn’t worth getting before, it is now.