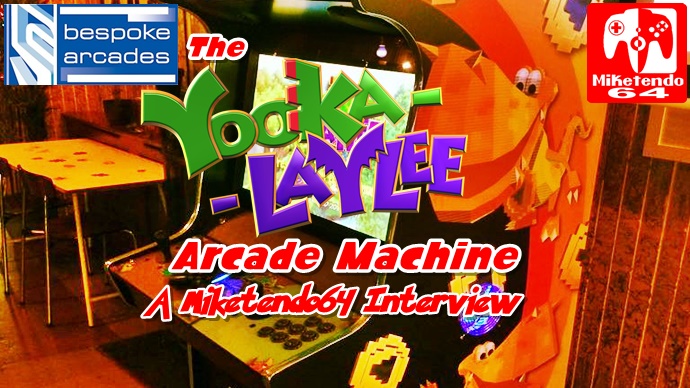 Back in April of this year, Playtonic Games’ fabulous Yooka-Laylee made its PC and console debut, except it also debuted on another platform as well, the arcade machine variety.

As part of a very celebration, Team 17 partnered up with Bespoke Arcades to make a custom arcade machine that Yooka-Laylee could be played on and Bespoke Arcade delivered when such a machine was exclusively playable at The Loading Bar to celebrate the launch.

Well, being in touch with the PR firm who handles news for Bespoke Arcades, we were able to send over a whole bunch of questions and while a few months have passed since our questions were sent off, we finally have the answers and we’re going to share them with you here and now, just bear in mind, the questions are a little dated:

In typical interview fashion, would you mind introducing yourself to our readers and telling us about your role within Bespoke Arcades?

Ben Georget: Sure, we’d happy to! My name is Ben Georget, Co-Founder and Managing Director for Bespoke Arcades. I started the business with my best friend and business partner Phil Patsias some 14 years ago and never looked back! We both run the business together, Phil is the technical and design genius and I tend to run the business for a top down approach, making sure the numbers add up and things are kept running smoothly!

The Work of Bespoke Arcades:

Miketendo64: Since Bespoke Arcades is not a name known to many globally, would you mind telling our readers how Bespoke Arcades came to be? Just what exactly it is you guys do and where does the name come from?

Ben Georget: Bespoke is a very British word, but for the uninitiated it simply means ‘custom’. We believe in keeping things simple and our name reflects exactly what we do. In short, we make custom machines for those who appreciate the genuine arcade experience and want an exceptionally well crafted and reliable recreation to call their own.

We started the business some 14 years ago when Phil and I became frustrated that arcades seemed to be all but a distant memory. Nothing beats the thrill of a dedicated arcade cabinet and we found it heart-breaking that all the best arcades in the country seemed to be disappearing overnight. The business started in the garage of Phil’s house!

The first arcade we built was a passion project, a proof of concept that we created for our love of the medium. The business just grew organically from there, pretty soon word spread here in the UK and customers from all over the world were getting in touch asking for something similar to be designed for themselves.

Today we offer peerless arcade machines and pinball tables to the public and business alike. We design all the arcade machines ourselves and often work on truly one-off designs for customers looking for something unique. From LED controls, light gun support, multi-screen displays and much more besides, there’s very little we can’t do in this space and we ship our cabinets all around the world.

The Decision of Making a Yooka-Laylee Arcade Machine:

Miketendo64: As part of a partnership with Team 17, Bespoke created an arcade machine to promote Yooka-Laylee, which was displayed at the Loading Bar in Stratford. How did such a partnership between the two of you come to be?

Ben Georget: We’re pretty well known to the UK gaming scene and a fair part of our business is taken up with corporate work which we run through our sister business ‘A-Game’. We’ve worked on many projects before and include the likes of Capcom, 2K Games and Warner Interactive as customers.

The folks at Warner had us create an army of state-of-the-art arcades which they used to promote Injustice and that was a lot of fun to work on! Last year, the guys at Team 17 got in touch with us and began talking about Yooka-Laylee and how driven it was from the retro community who loved the Rare N64 era so much.

We thought that a genuine Yooka themed Arcade would be a lot of fun to work on and the idea grew from there. The Arcade turned out beautifully, and the custom design allows it to run all the arcade favourites you would expect and then flick a switch to turn to PS4 mode where the arcade can run Yooka perfectly.

The Console inside The Machine:

Miketendo64: To get the big question out of the way, how does the machine play and compare to its console counterparts?

Ben Georget: The game is in fact the PS4 version. A hidden PS4 runs Yooka and an external switch toggles between the arcade games and Yooka Laylee. When playing Yooka, gamers can use a wireless controller or hard wire direct to the console via built in USB ports. In short, the game plays identical as home version but it looks so much cooler!

Miketendo64: What does Playtonic Games think of the machine and have any of its team members have the chance to play it?

Ben Georget: Many of the Playtronic team were at the launch of the game where the arcade was unveiled at the Loading Bar! They loved the arcade and we’re blown-away at what we managed to achieve. Several of the team took our details and are looking at arcades for themselves!

To play a Bespoke arcade is to love a Bespoke Arcade and I think that developers as talented as the Playtronic crew respected the craftsmanship that goes into our builds.

Miketendo64: And how was fans/players reactions to your wondrous creation?

Ben Georget: Everyone who played on the machine loved it. In fact, we saw a social media post by the CEO of Team 17 who remarked how she wanted one for herself! It’s an irresistible slice of retro heaven and fans of arcades and Yooka alike all seem to love the machine, I know it’s proving very popular at the Loading Bar!

Personally, I think it resonates so well with the target Yooka audience. During the glory days of Rare and 3D platformers, Arcades were still a big draw, it’s natural that fans of the game will instinctively be drawn to arcade entertainment as well.

The Shenanigan before the Show:

Miketendo64: Do you have a funny story or anecdote that took place during the creation of this, or any of your machines and would you mind sharing it?

Ben Georget: Though it might not make great reading, the build was relatively straightforward. The urgency came a day before when we figured out that a beta build of the game needed installing on the PS4 in order for it to be playable at launch.

A member of Team 17 had to go down to the Loading Bar early in the morning to install the game on the PS4 but couldn’t figure out how to access the security panel of the arcade and reach the PS4 inside!

We had to walk the team through the process step by step using a large drill and a screwdriver. It’s the closest we have to a Lethal Weapon ‘cut the wire’ scenario, as the team needed to be very careful indeed not to damage any of the electronics of the arcade in the process!

All turned out okay however and of course the visitors had no idea of the graft that went into getting the machine ready for launch night!

The Fate of the Yooka-Laylee Arcade Machine:

Miketendo64: Since the Yooka-Laylee arcade machine is hand-crafted, how long did it take to fabricate and what will you be doing with it when its time at the Loading Bar comes to an end?

Ben Georget: Build times for our arcades very from project to project depending on the complexity involved. We’ve actually build many cabinets like these so the time for us was more in designing and finalising graphic design with the talented guys at Team 17.

I think it turned our looking pretty awesome! Finalizing the build and housing the electronics comes naturally to us but applying the graphics can always be tricky, ensuring that the arcade looks perfect from every angle.

The arcade is now the property of Team17 so it’s theirs to do with what they wish, but I believe plans are afoot to sell the arcade to a collector and donate proceeds to charity later in the year….

“Every day brings something news at Bespoke Arcades!”:

Miketendo64: How does the Yooka-Laylee arcade machine compare to your previous creations and do you have a next project already in mind?

Ben Georget: The fun of our work is that every creation is different. In terms of complexity, the Yooka cabinet was pretty standard work. We’ve done huge simulator style projects before and some of our more demanding clients go all out with multiple screens (One for the game and one for the arcade artwork!), LED lights, trackballs, light guns, steering wheels and so much more!

We’ve done full sit down car simulators and custom cabinets for multi-player turn based PC games which were very challenging to say the least. Right now, we’re working on perfecting the King-Pin, our brand new Virtual Pinball machine, featuring real-time head tracking, 3D graphics and state of the art force feedback technology. Like I said, every day brings something new at Bespoke Arcades!

Miketendo64: Given the fact you are an arcade focused company, what are your all-time favorite arcade games to play and what do you think of Yooka-Laylee?

Ben Georget: We’re fans of the retro arcade experience. Old school beat em’ ups like Street Fighter 2 are constantly played in our offices as are twitch based shooters like R-Type and Gradius. The classics still hold up today but we’re also huge console gamers and like many of us, we have a soft spot for Banjo, Mario 64 and the Rare classics which form so much of the Yooka-Laylee DNA, It’s a great game and thoroughly addictive.

Ben Georget: The retro and arcade game community are the best in the world and our loyal customers mean the world to us. We’ve been around for 14 years because we care deeply about what we do and believe that we offer the finest products as well as customer service in the industry.

If you’re a lover of real arcade entertainment, we urge you to get in touch and have a chat with us. You might be surprised at just how affordable a Bespoke Arcade of your own is! Please feel free to find out more at http://www.bespoke-arcades.co.uk or call us on +44 207 935 9005. Be sure to follow us on social media as well!

Ben, thank you for taking the time to answer our questions, you really gave us an insight into what was one of the coolest things to happen in the gaming scene this April. I only regret not being there myself to have a go on it!