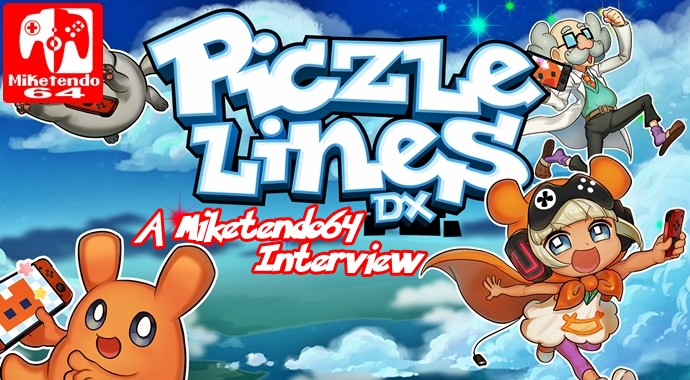 When Piczle Lines DX was first revealed for the Nintendo Switch, it came as bit of a surprise, but one that was well received and now as its release is vastly approaching, we at Miketendo64 wanted to know about it. So via the assistance of publisher Rainy Frog Games, we got the chance to interview one of the developers behind the game and with Piczle Lines DX set to release worldwide on the 24th of August, now is the perfect time to share what was said in response:

In typical interview fashion, would you be so kind to introduce yourself to our readers?

Thank you James, and now with the introduction out of the way, we can properly commence with the interview.

Piczle Lines DX in a Nutshell:

Miketendo64: For our readers who have never played the mobile version of Piczle Lines DX, what kind of a game is it? How does it work and just how much content does it possess?

James Kay: It’s a logic-puzzle game in the nonogram tradition, also sometimes referred to as “illust-logic”, as the puzzle creates an image when completed.

“Piczle” is a contraction of “PICture puzZLE”. You are presented with a grid with colored dots with numbers in them. The object is to connect two dots of the same color and number by drawing a line between them that covers the same number of grid squares as the numbers. It sounds a lot more complicated than it really is!

Once you’ve completed all the lines a picture is formed. There is a tutorial that will guide you through the idea of the game.

There will be a LOT of puzzles available at release, a 100 story mode puzzles and then even more than that for the puzzle mode. After all updates in the future there’ll be easily over 500. This includes humongous puzzles as well, so it will take quite some time for even the most ardent logic-puzzler to work their way through it all!

James Kay: There will be future, free updates that will include more puzzles. All puzzle packs available on the mobile version will be added and perhaps even more; we’ll have to see.

The Decision to bring Piczle Lines DX to Nintendo Switch:

Miketendo64: As a game previously made for smartphones, when did you decide to bring it to Nintendo Switch and how have you found the porting transition?

James Kay: For a variety of reasons we made the game using Unreal Engine 4. One of those reasons was definitely its platform agnostic approach. Aside from rejigging the screen layouts (with new art and a redesigned front end) and designing a new control scheme to complement the existing touch input it was fairly painless!

The Developing Process and working with Rainy Frog Games:

Miketendo64: Just how long has Piczle Lines DX been in development for Switch and how does it compare to the smartphone version?

James Kay: Altogether it was probably two months of work for a single coder (!!) with a little help from the artists for the above mentioned screen layouts. The mobile original was also a quick process for a tiny team, all thanks to the tools available with Unreal Engine and the not insignificant talent and dedication of the team. A lot of work was also done by our publisher Rainy Frog who provided all the localization.

Miketendo64: And since you mentioned Rainy Frog, how did you find working with the publisher and what prompted you to work with them on Piczle Lines DX for Switch, in the first place?

James Kay: I’ve known Tony of Rainy Frog since forever and we’ve even worked at the same companies before. Once the mobile game was released I naturally thought of approaching him to help put it on Nintendo Switch, as he’s got a lot of experience publishing on Nintendo platforms. His support and contacts at Nintendo, as well as his dedication in getting the game localized has made working with him a dream!

No HD Rumble, but Touch-screen, Single Joy-Con and Pro Controller play are All Supported:

Miketendo64: Well since Piczle Lines DX is Switch bound, just how many modes does it support and does it have HD Rumble?

James Kay: All of them! Of course it plays very nicely using the touch screen but it was important for me to have a tight control scheme using the Joy-Cons so tabletop and TV modes are all supported. There is no rumble though.

More could be on the Way, but it’s no Guarantee:

Miketendo64: And now that you’re Switch debut is nearly here, with Piczle Lines DX soon to release, do you have any plans to bring any of your other mobile titles to Switch?

James Kay: At this stage I’ve not yet thought about porting other existing titles but I’m definitely interested in developing for the platform more. It’s an exciting console!

James Kay: We truly hope Piczle Lines DX will satisfy logic-puzzle fanatics but hopefully also introduce new players to the genre! It’s a great way to both relax and exercise the brain. We’re very proud of this game and we hope people will enjoy it!

To James, and all the rest of you at Score Studios, I hope you all have a fantastic week and greatly look forwards to seeing what you could bring to the Nintendo Switch in the years to come.