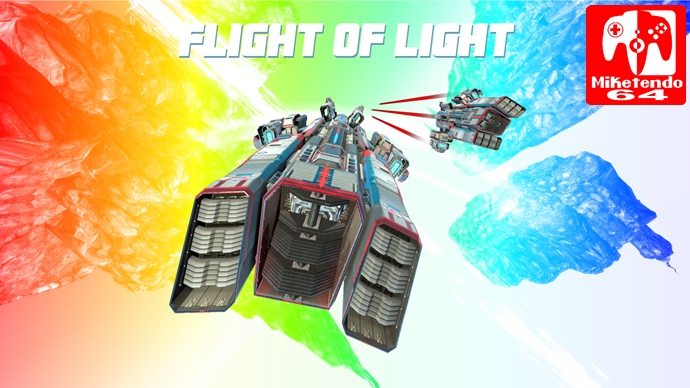 [Review] Flight Of Light (Wii U)

It is nice to know that there are developers that are still willing to continue development for the Nintendo Wii U even though the Big N has given up on it. One such title which is the Racing Rhythm game that is Flight Of Light. Released on Wii U August 3rd 2017, Flight Of Light has you race a futuristic craft along a suspended course whilst trying to hit the colour coded barriers in time with the music.

Up to five players can participate at the same time with Player 1 on the Gamepad and the other 4 on Wiimotes. Though this allows for 5 to play at the same time. The Gamepad does offer a slightly unfair advantage over the wiimotes as it only relies on rotating the left control stick as opposed to the motion controls of the Wiimotes.

The courses that you ride through are quite vibrant and but there aren’t really relevant as you don’t actually have time to appreciate them as you are constantly focused on hitting the barriers at the right time. There is a possibility that the developers took this into account as the graphics of the courses look like the have been given a lower resolution rendering to help lower the risk of frame rate drops as your craft speeds along the track.

The music in this game however, is beautifully done and though it is quite upbeat, can be quite chilled and relaxing at the same time. Not exactly Rave music that will have you reaching for the whistles & Glow sticks but not quite putting you into a comatose state of tranquility. Music is the main drive of this game and hitting all the barriers at the right time is essential in getting the highest score.

There are Three Modes to choose from, Tutorial, Campaign and Free Play. Tutorial takes you through the ropes, Campaign is where you go to unlock the 9 different courses to play on That take place In the City, under the Sea and in Space. and Free Play allows you to choose which levels you would like to play, whether you want to play Race or Score Attack and which level of difficulty you would like to play.

The main experience of this game can be played within an hour or two and afterwards there isn’t really that much drive to keep playing unless it is with friends. To be fair, people have already turned their back on the Wii U so it makes multiplayer harder as most people won’t even acknowledge the Wii U any more which is a great shame as it does have plenty of incredibly amazing games. However this isn’t really one of them.

Flight Of Light is a good game but it isn’t “Great!” There is no real wow factor and with it trying to be two things at once, Racing & Rhythm, it doesn’t really excel in either. If you want an enjoyable music rhythm game, you would look towards Guitar Hero or Just Dance and if you want a cool sci-fi racer, then Fast Racing NEO/ Fast Racing RMX is your best bet and actually has plenty more options available like choice of vehicle and many more tracks. At $8.00 it is kind of hard to justify the price when you can pick up Fast Racing NEO for $14.99 which has more than 3-4 times as much content and the graphics and music more impressionable. I am sad to say that Flight of Light just did not hit the high notes for me and that a 6/10 is more than generous. If more content was to become available I may consider revising my review. This game is okay in small doses but it doesn’t offer anything new or different after the initial playthrough. There is no real replayibility unless you can rope some friends round to play.

If you would like to see some gameplay footage of the game in action, you can check out the video below courtesy of Nintendo Impact Gaming!


Categorised in: Nintendo, Reviews, Wii U