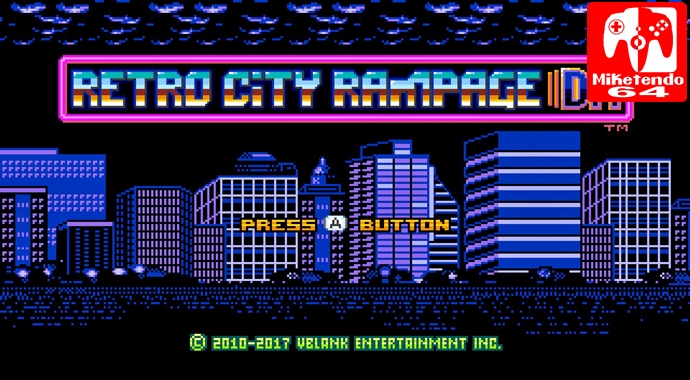 I hope you’re ready for an extreme dose of mayhem, chaos and destruction as the Nintendo Switch now has its latest open world game and that game is none other than Retro City Rampage DX.

Prior to experiencing the game on Switch this week, I have never played Retro City Rampage DX, or its original incarnation on any playable platform and I am kicking myself for that because this game is class! Developed and published by Vblank Entertainment, Retro City Rampage DX is a game an open world game that is perfectly summed up by its own title as it is retro adventure, taking place in a retro city named Theftropolis, where you can go on a retro rampage. (Yes the excessive use of the word “retro” in this sentence is deliberate.)

For me, the whole Rampage aspect is what I enjoy most about the game, sure it is absolutely riddled with references to noticeable franchises and series’ that is very enjoyable to see in action, but who doesn’t want to bust a cap into everything and everyone you see in video game land? There is a reason why the Grand Theft Auto games are so popular with gamers the world over, it speaks to humanity’s primal desires to cause chaos with no ensuing consequences.

Plus there’s the whole hang-out sessions with street workers, laws to break and an army to flee from, but we don’t need to go further down that road, so let’s bring it back to Retro City Rampage DX, a game that was inspired by Rockstar Games’ Grand Theft Auto series. As an open world game there is plenty to see and do, as the city is sizable, there are missions of all kinds and lots of fun challenges to do in addition to a main story and a whole lot of stuff to collect. We’re talking styles, loot bags, “good times,” invisible walls and power-ups, but let’s talk about the story for the moment.

The protagonist is the Player and the Player soon gets mixed up in trouble when in the year of 1985, he signs up to be a thug and three years later, whilst working as a henchman to a big bad criminal by the name of the Jester, who just so happens to the leader of a major crime syndicate. Long story short, nothing goes as planned and the Player ends up in a time travelling phone booth that takes him to the distant future (the year 20XX to be precise!) It is then in said future, where the player is greeted by Doc Choc (based on Doctor Emmett Brown from the Back to the Future,) whom he must work with to get the required time machine parts to rebuild a broken time travel machine.

I’ll be honest, the story isn’t all that, but it’s not supposed to be, this game is a walking, talking, action packed parody, so it’s meant to be funny with a touch of bizarre, but where the game really stands out, is in all the things it has to offer. Grand Theft Auto may never come to Nintendo Switch, but with the likes of Retro City Rampage DX, a Grand Theft Auto release is not necessarily! Retro City Rampage DX offers a lot of the same things any GTA game can, you can mow down as many people as you want and be rewarded for it, you can raise your threat meter and force the police and army to come after you if you’re a big enough threat and be rewarded for it. (Yes Retro City Rampage DX is a game that rewards destruction).

In fact there is a whole medal system at play where players can participate in things like Slaughter Sprees and if they can kill enough people, or cause enough mayhem in a certain way, with a certain weapon, they can get a Bronze, Silver, or even a Gold medals. But even if you can’t earn a single medal as you failed to get the required amount within the time limit, you can of course earn yourself a ribbon! (For the sake of saying it again, you are rewarded for killing, even if you fail to hit the goal. Talk about madness.)

But the absolute best bit has to be the appearance of one Major Lee Solid. A character who clearly takes inspiration from Metal Gear Solid’s Solid Snake. Not only is the character in the game, but he will train you to shoot, fight and jump on top of enemies heads. He’ll also hid in a box later on, but come on, who wouldn’t want to take lessons from a pro?

Still if that’s not enough to float your boat, Retro City Rampage DX, is an 8-bit delight that comes packaged with 147 playable songs on its jukebox, more than 60 Story Missions, 40+ Arcade Missions. More than 20 weapons and power-ups, interesting mini-game tie-ins, 200+ character customisations and a whole lot of cars and bikes (including a Yoshi themed one,) that are just begging to be stolen and with the likes of the police force being described as being “Evil Good Guys,” the challenge is on to strike them down when encountered. You are bad enough to take them out? We both know you want to say yes!

If you are a gamer looking for a Grand Theft Auto experience on your Nintendo Switch that comes in compact form, you won’t go wrong with Retro City Rampage DX. It is by no means the best game in the world, but it is a fantastic title, a great way of hyping up the fans for Vblank Entertainment’s forthcoming Shakedown: Hawaii and a game where you can do whatever you want whilst getting a whole lot of references shoved down your throat. Be prepared to relive your childhood, because it is ready for you!