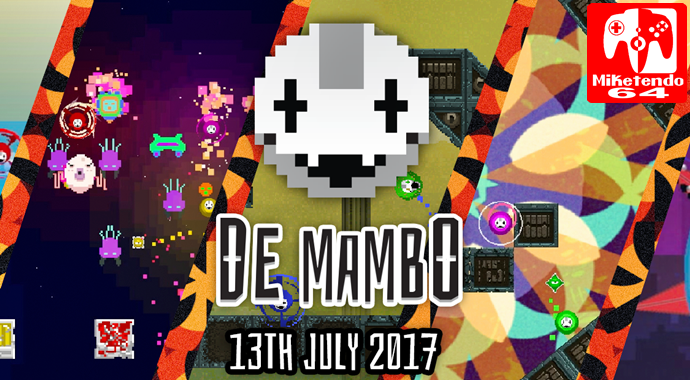 De Mambo Is Out Now On Nintendo Switch

The mad cap game that is De Mambo is now out on the Nintendo Switch. Up to four people can play as they have to force each other off of the stage. Be warned though, if you charge your attack too much, you may miss your oppenent and launch yourself off of the stage instead. We have included the Official Press Release below from the Developers The Dangerous Kitchen.

The Dangerous Kitchen’s first born, De Mambo was created solely for pleasure… as you engage in Mambo Combat! Grab a Joy-Con™, charge your measly one button and release at different times to do three different attacks! Knock your opponents off the screen and break the level however you decide (thanks to some flimsy architecture), to make your game marginally different each time you play.

De Mambo launches with 3 modes; ‘Mambo’ where 2-4 players battle it out until one is left standing; ‘Solo’ mode where one player feasts on a mélange of 70+ salivating gameplay challenges; and ‘Survival’ mode the 1-4 player mode where you try and survive… from an onslaught of the evil Personal-space Invaders.

The Dangerous Kitchen will prepare a healthy dose of new content for De Mambo after release, including 26 more ‘Mambo’ levels and new ways to play.

Amit Rai (Coder and animator)
“This being our first game and all, we’re absolutely terrified at how people will react when they play the final version. It’s been such a crazy-long journey and we’re just happy that soon we won’t have to work on this godforsaken game any longer.”

Shaun Roopra (Artist and writer)
“We’re so happy with the game we ended up making, how fun all three modes are and the amount we achieved with so little. It took a while and we died mentally, physically and probably spiritually too, but we wouldn’t change it for the world.”