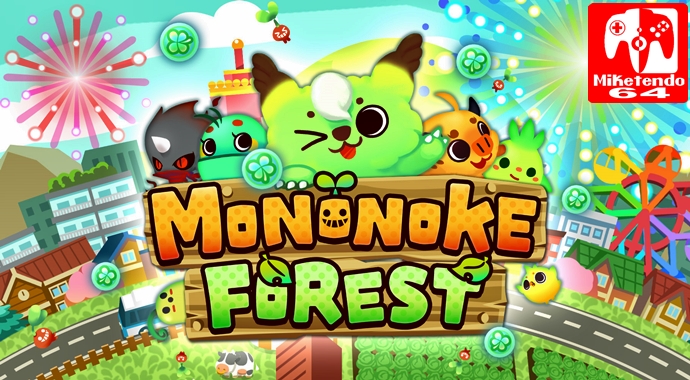 Well I hope you guys are ready to read one of the hardest reviews I have ever written, because I certainly am not, but here I go anyway!

Originally released in Japan on the 17th of June, 2015 under the name of Kororoke no Mori Poitto, the cutesy action simulation has finally come West under the new name of Mononoke Forest. Now should you be wondering why you have never heard about this game, it is because since it’s European release last month, (North American release date is yet t0 be determined), English reviews for the game are incredibly scarce. So much so that as well as being unable to find at least one review for the game, there’s hardly any reference materials for it as even the official website provides next to nothing about it, which means it falls down to me to do a decent job of explaining all there is to Mononoke Forest. (Oh boy!)

Okay so, Mononoke Forest is a “heart-warming simulation” in which you collect and use creatures called Mononokes to clean the seas, attract animals, build houses and collectively use their magical powers, to “bring a village back to life.” A village that you can name anything you fancy, or just leave it as the default Cororo Village.

Now if you were hoping this is a game that allows you to do plenty of button work, than sorry guys, but whilst some buttons can be used, Mononoke Forest is all about that Stylus play, so get ready to play a game and cause potential damage to your screen at the same time and as for the story, yeesh. I’m not saying it’s a terrible story, as it actually starts out pretty good, but it does not get the chance to stick in one’s memory. A bad Mononoke known as a Hazard Mononoke attacks, the Grand Mononoke Cororo disappears and despite the best efforts of Cororo’s friends, they are unable beat the Hazard Mononoke, who gets away unscathed.

The three defeated Mononoke then venture out to see a world in disarray. A poisoned land that is so polluted that the villagers are fleeing their destroyed village, and even though they are without their Grand Mononoke and the Cororoke that only a Grand Mononoke can make, which gives them their powers, they set out to restore the village to its former glory. From that point on, a new Grand Mononoke appears and joins the team, along with various other Mononoke who turn up as the game goes on so without. Only don’t go expecting to fly through the story in no time at all, as the game does not work that way at all. Sure you can reach the end within 20 hours, but the majority of the time you’ll get so side-tracked with side quests or clearing up the new devastation passing Hazard Mononokes have wrought, that you’ll almost forget there is a story to the game.

I know it may sound like I’m over exaggerating, but there were two hours of gameplay yesterday that I actually forget about the fact that the Mononoke’s wish to collect as many Happy Orbs as they possibly could in the hopes of reaching a Paradise land. But because I haven’t explained what Happy Orbs are, they are the game’s form or currency, as well as something humanity emits when their wishes come true. For example one wishes more houses were built so more could live in the village. Well instead of humans doing anything for themselves, the Mononokes, whom are invisible to humans, come out in the night time and have to spread energy so that houses can be built. Sure fulfilling wishes does earn Happy Orbs that can then be used to evolve your Mononokes or even Super Evolve them and build things like clinics and schools, but humanity gets a bad rep for this game.

All people do is whine about things and instead of doing anything else, the Mononokes have to sneak around like little Ninja’s in the night time, grouping together before being flung at a pre-determined location on the top screen whilst playing and making things happen and then after the night ends after you have done your 12 throws a level, ended it early or time as ran out when battling Hazard Mononokes, suddenly you’re in another season entirely and after 4 and entire Year has gone past. Then when you get far enough into the game, pretty much every time Summer rolls round, you then have to clear up the devastation left behind by a Hurricane, which can take a year.

However I feel as if I am giving this game a bad rep, so let me try and make something clear. When I first started playing, for the first 4 hours it was good. The 3 that followed weren’t as good, but they weren’t bad either, but the more I played this game, the more boring I found it as it was swiftly losing its appeal, despite its cuteness and interesting music choices. So I found myself drifting in and out as I played, just wishing for the experience to be over and honestly, I hated feeling like that for this game. This is the kind of thing most Animal Crossing fans could enjoy and while I am not one, I did enjoy it but the charm could not hold me and I just felt bad for the game. It had good ideas and things I do like about it, but not enough to remain interested.

But because I don’t want to write this game off for some of you reading this, I’m going to talk about the things I do like. I like how the game tries to explain everything to you and should you forget certain things like a specific combination required to clear debris in the sea, there is both a help menu and a book filled with all kinds of details that can help you with. I like the in-game achievements that are fun to collect. I like the use of StreetPass and the fact that it allows you to show your village off to other players and see theirs. I think how you can almost build absolutely anything in this game provided you have all the tools resources to do so.

I like how there are 40 different kind of Mononokes for the player to control, even though there is a limit as to how many you can actually have. I adore the battles against the Hazard Mononokes and the fact that if you don’t beat them outright, you can still resume the battle a couple of times until either you win, or they leave. But most of all, other than evolving all chosen minions to their final and magnificent looking forms and getting things like sub-element powers and extra stamina, I liked seeing and implementing all the different combinations this game had to offer by pairing various Monokes up. Alas, even with those great ideas that were implemented in the best of was at times, Mononoke Forest just isn’t the winner I was hoping it would be.

As much as I would like to have a nice conclusion about this game, the simple fact of the matter is, for me it just got so tediously boring that the story lost the importance it was meant to have, so that by the time I reached the end, I just didn’t care about what happened and will probably forget it about a week’s time or two. That said, while I may not like it there are others who will and it was enjoyable when I first started playing it, so while I am not going to give it a cruddy low score, 7/10 is the very best I can do. As for would I recommend it to anyone? Probably not no, but it is a cheap game and it’s your money your spending, so if you feel I’m being a bit too bashful about it, then give it a try for yourself. It could turn out to be your perfect game, or not your perfect game, but something you enjoyed anyway. You will never know unless you try it for yourself.