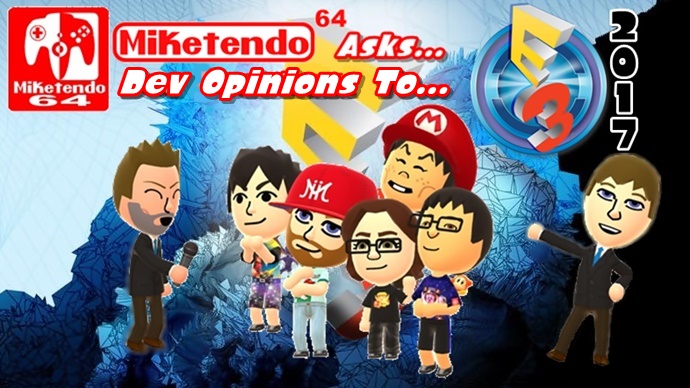 This is Miktendo64 Asks… The mini-interview series that sees us getting in touch with various devs to hear what they have to say regarding all manner of hot topics. Naturally the hot topic this time around is E3, so we sent out two questions to various devs and today we’re going to be sharing what they had to say:

With E3 taking place less than two weeks from now, is there anything in particular you are looking forwards to seeing be announced and shown off? (This can be from Nintendo and its competitors such as Sony and Microsoft, but is not limited to them, so EA, Ubisoft and the like are also allowed.)

Philipp Döschl (FDG Entertainment): E3 this year will be VERY exciting! There’s more potential for big news and announcements than in the past years thanks to a growing market and with Nintendo being back 100% thanks to Switch. It couldn’t be more exciting.

I wonder if Nintendo will announce an open world Pokémon in the likes of Breath of the Wild, this would be the next killer system seller after the recent Monster Hunter announcement. I’m pretty sure that after the success of Pokémon Go both Nintendo and The Pokémon Company are working on something great. Besides that, I’d love to see more of Luigi’s Mansion 3, as well as a new Pilotwings. Star Fox also deserves a great new game too, the IP has so much potential. And a new Metroid. Samus HAS to come back!

Then there’s Microsoft’s Scorpio. Technically the most powerful machine in this year’s roster, I wonder if they got some outstanding and exclusive games to sell the half-newish system. More power is nice, but I speak for a lot of people out there that we’re sick of the ever same cross platform AAA stuff that gets re-released every year with an incremented number. Same goes for Gears and Halo… I absolutely hope Microsoft did their homework on the software side as well and has some brilliant new gems ready for us to play.

Last but not least, Sony. Days Gone as well as Uncharted: Lost Legacy might be their big things, but I’m hoping for a few surprises. I love Sony for their approach on exclusive games. There’s a good fit for everybody and their exclusive line-up has become stronger and stronger over the years. So I bet there’ll come up with a new IP too.

Big N and Sony both deliver awesome arguments for their systems. Switch cleverly demonstrates that power is not everything anymore nowadays. Sony has great exclusives and VR. Microsoft seems to be missing all that unfortunately. I seriously hope E3 will be a turning point for Xbox One. Let’s keep fingers crossed, the pie is definitely big enough for 3 console platforms, as long as all of them have a strong USP on the content and features side, not only raw power.

Getting to the more unrealistic things I wish for, #1 for two decades is Phantasy Star 5. I loved the series and hated the transition from Phantasy Star 4 to Phantasy Star Online. Ever since I’m longing for a full fletched classic single player J-RPG follow up. I just have serious doubts this will ever happen. Other than that, a PS4 Pro 2 with a bit more power and all the VR stuff integrated would be very very nice, as it would free up some space and reduce the amount of cables. And how about a new Mario Paint?

Rodrigue Duperron (Thunder Lotus Games): From Microsoft, I want to see a confirmed release date for Cuphead, and I want that date to be “Available Now”. And some news about Shadow of the Tomb Raider would be more than welcome as well.

Sony will be hitting God of War pretty hard, but I’m much more excited for a surprise reveal something brand new that they haven’t already teased, and that hopefully isn’t a sequel.

Same thing for Nintendo – yes, more Super Mario Odyssey, please – but also show us some indie love. Not a port of something that has been out forever everywhere else – a brand new exclusive indie that’ll make everyone jealous (like Cuphead, but which somehow takes advantage of the Switch in some unexpected ways).

My hardware side wants to have a closer look at the Xbox Scorpio – or more specifically, see with my own eyes a console deliver actual 4K 60fps gameplay without compromises. Also wouldn’t mind news of a PS4 Pro price drop and/or bundle, making an upgrade from the Slim that much more tempting.

Jay Kidd (Wraith Games): As far as what we’re looking forward to seeing be shown off, I know that a few of us over here really want to see more of Sonic Mania (I know we’ve already seen a lot, but still), Mario Odyssey, and more on Splatoon 2. As for what they might announce? Heck, anything new that they announce can’t be bad at this point!

Never really has much of an interest in Microsoft, but out of the Sony and SquareEnix camp, I know that almost all of us want to see more Kingdom Hears 3! Other than that, unless Ubisoft announces 1920’s or 40’s New York, or Feudal Japan Assassins Creed games, that’s probably about all of us. Well, a new Rayman game wouldn’t hurt!

Alex Rushdy (13AM Games): I‘m always looking forward to what Nintendo announces at E3, most especially the games that come out of left field. I loved when Nintendo announces games like ARMS and Splatoon out of nowhere. They always have a way to surprise, even if they seem to be moving further and further away from E3. I’m less interested in announcements about existing games or IP as I am about bold new experiences.

On the non-Nintendo fronts, Sony usually knows how to put on a good show with crowd-pleasing game announcements, and Microsoft often shows off exciting new business models and experimental tech. I tune in if I get a chance during the day!

I’ve never been very excited by an Ubisoft or EA conference, but I am looking forward to seeing what development houses like Platinum Games, and companies like Capcom and SEGA could be bringing to the show.

Personally, there are some games that I’d love to see re-booted and brought to a new generation, like F-Zero, but I’m not holding my breath…

As for your own Nintendo endeavours, when can our fans and your readers expect to hear some big Nintendo related news pertaining to your own works?

Philipp Döschl (FDG Entertainment): As for anything FDG related for Switch, there’ll be an announcement in very soon, in the next couple of days. (We submitted Oceanhorn to Nintendo’s Lotcheck a week ago.)

Brjánn Sigurgeirsson (Image & Form Games): I don’t think we’ll announce anything earth-shattering before or at E3, there’s so much else going on there and then. We’ll have our moment in the spotlight later on.

Jay Kidd (Wraith Games): As for us, we’re hoping to at very least have a launch date for Collapsus sometime in the summer. We were just Greenlit on Steam, so with that out of the way, waiting on the switch dev kits to go live is all there really is. A rep from Nintendo told us to “keep an eye on the developer portal”, so we’re expecting news soon.

“Radarkanoid3000”, “AAAAH! A Giant Freakin’ Cave Worm, RUN!”, and “BurstLancer” are all being developed side-by-side by different internal teams over here, and they are all in a contest with each-other who can finish first (while still passing QA). We will more than likely have trailers, screenshots, and demos up in the next three months. All three of these should be available on Nintendo platforms (we are still also supporting the Wii U and 3DS as long as Nintendo lets us), and Steam when they are done.

Alex Rushdy (13AM Games): As for us, and big Nintendo-related news… We’ve still got an announcement or two to make this year.

*During an Interview with Nintendo Life, it was revealed 13AM Games does have a unique game in the works for Switch, but if you caught our Twitter AMA with Alex Rushdy earlier this year, it was confirmed they have two new games in the works that have yet to be revealed neither one is a Runbow sequel.

Now just because you have reached this point and there are no more responses for you to read through, it doesn’t mean this article has had its day. A few more devs we contacted have yet to respond and when they do, we will be sure to add their responses to this article.

Besides we like our Miktendo64 Asks… segment too much to end it here, so be sure to see more of it in the coming months! There’s always something worth talking to devs about!