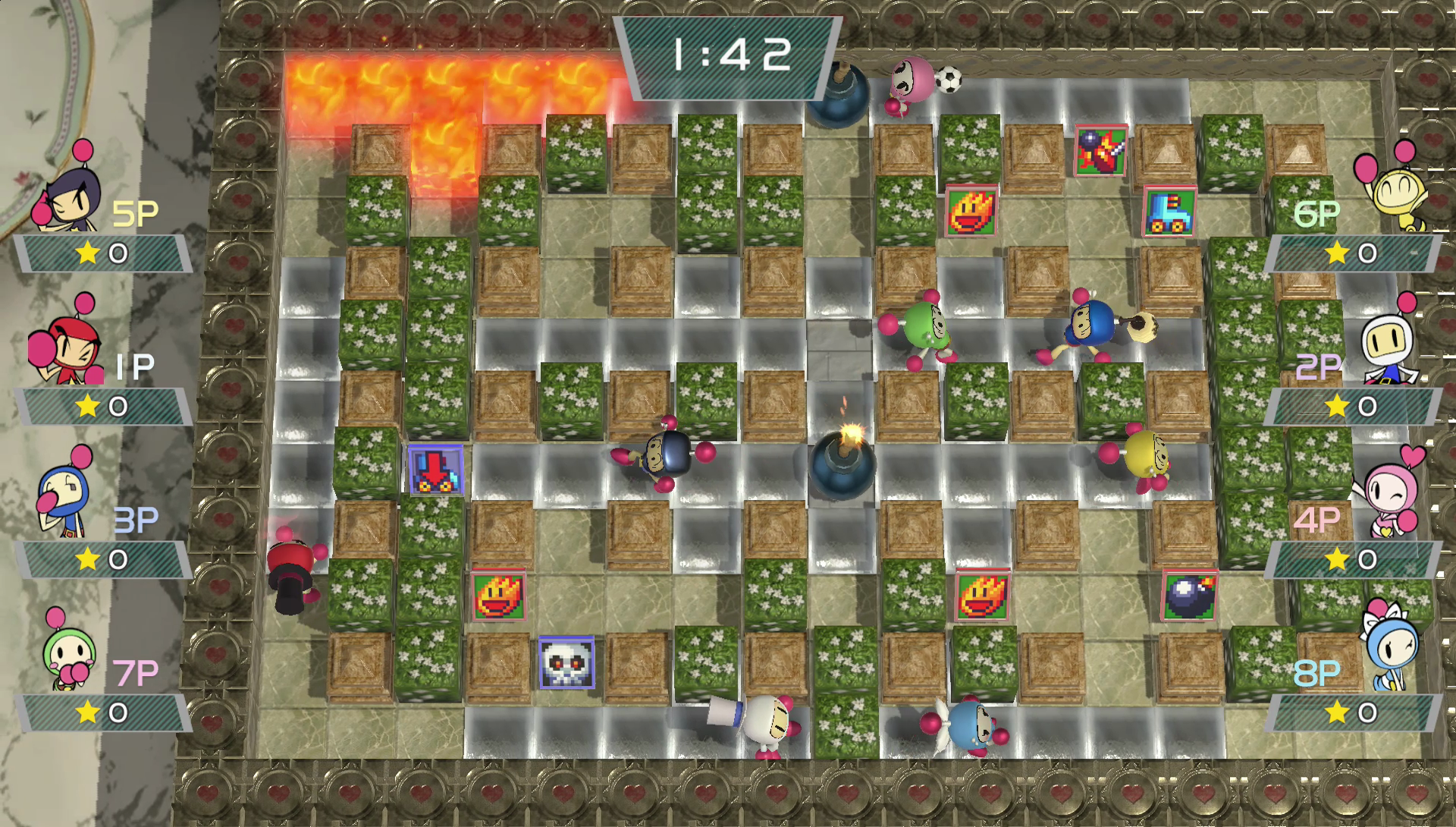 April 16, 2017 8:18 am Published by themancalledscott Leave your thoughts

It’s been a long time coming, but Bomberman is finally back! Once developer Hudson Soft – creators of the Bomberman franchise – were purchased by Konami, the series took an extended hiatus. Konami was so quiet in regards to Bomberman, in fact, that many wondered if we’d ever see the beloved multiplayer series again.

Thankfully, such fears can be put to rest, as Konami’s first original Bomberman game arrived as a launch title on the Nintendo Switch, in the form of Super Bomberman R. But is Bomberman better than ever, or does his return prove to be a little rusty?

It may as well be said now, Super Bomberman R is very much the Bomberman you know and love. Though it may not be the best of the traditional Bomberman titles (that honor would go to Saturn Bomberman), it is a welcoming return to the series that may also serve as a fitting introduction to the classic Bomberman gameplay for new players.

Just as the case is with most titles in the series, Super Bomberman R sets players in single-screen arenas, where they have to blow up blocks and other obstacles to make their way through. Along the way, they can pick up power-ups that allow you to plant multiple bombs at once, increase the length of the explosions, allow you to throw your bombs, and so forth.

The gameplay – being identical to the majority of Bomberman titles – is fun, though its over-familiarity may make the Bomberman initiated feel underwhelmed if they were looking for anything more than a simple return for the series after years of absence.

The game has two primary modes: Story and Battle.

Story Mode sees one or two players progress through a series of single-screen levels, where they must simply get to the exit to move on. Though they must first activate the exit by meeting a certain requirement (usually it’s defeating every enemy, but you may also need to escort characters to a designated spot, collect keys, or simply survive for a set amount of time). Each world consists of eight such levels, followed by two boss fights.

The first boss fight always pits players against one of the Five Dastardly Bombers, who each have their own unique bomb type. You only have to hit them with a single bomb, but their AI is quite crafty, and at times can feel like you’re up against a human player, making for some intense encounters.

The second boss of each world is much larger, and involves one of the Dastardly Bombers piloting a large robot or other vehicle. Unfortunately, these bosses aren’t nearly as fun, primarily because they quickly become tedious. Each boss has their own pattern, which never really changes during the fight, and having to expose their weak point only to hit them with one or two explosions before the process starts over quickly grows monotonous.

This perspective issue is also noticeable during the aforementioned giant boss fights. Oftentimes, the bosses are so large that they take up most of the screen, making it difficult to see your character as they disappear under the mechanical bosses. What’s worse, you may often get killed by accidentally touching part of the boss when you can’t even see where your character is.

All this is a non-issue in battle mode, however, as the camera is fixed in the series’ usual top-down style. Battle mode is where you’ll be spending most of your time with the game, as you can battle other players locally or online in deathmatches which are as fun as ever. Super Bomberman R doesn’t do anything new with the Bomberman multiplayer formula, but after years of a Bomberman-less gaming landscape, it is good to have it back.

In the end, Super Bomberman R may not be one of the greatest entries in the series due to its lack of innovation to the classic formula and some camera issues and tedious bosses in its story mode, but it does provide that classic Bomberman gameplay that it sure to bring a good deal of fun in multiplayer sessions, whether battling various foes online or teaming with a friend in story mode. Combine that with some pretty gorgeous visuals and catchy music, and you have another healthy reminder of why this series was so memorable to begin with.

If you’re a Bomberman veteran, you’ll feel right at home with Super Bomberman R. If you’re new to the series, it serves as a good introduction to what the franchise has to offer. Either way, it’s great to have Bomberman back.