[Review] The Wonderful World of Goo 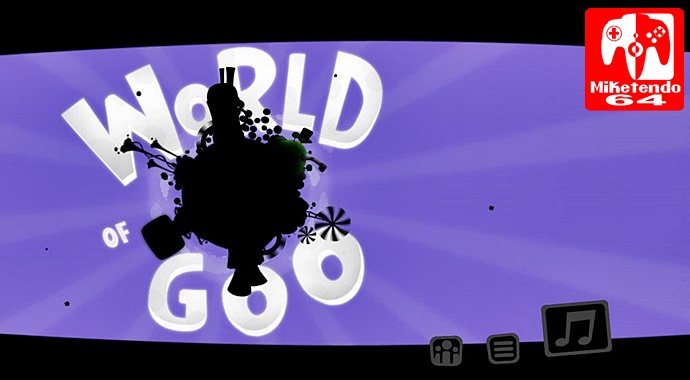 Designed by Tomorrow Corporation’s Kyle Gabler, World of Goo is the oldest of the three Tomorrow Corporation titles released on Switch this week, but it’s quite possibly the best one out of the three, due to the intelligence behind the game and the ground-breaking physics that impressed us all back in 2008. Only it’s not 2008 anymore, so while it was rated as a 10/10 by various sites such as Eurogamer and Nintendo Life, but how does it compare in this day and age? That is the question we’ll be exploring today in this review.

Well the graphics, the music and the mind boggling physics that we love are still present, in exactly the same way we saw them last and they have aged rather well. World of Goo is still the attractive and enchanting game that released nearly a decade ago, with the very clever mechanic at play. Granted Breath of the Wild’s physics engine may now put World of Goo’s to shame, but World of Goo is a game you can play with a friend thanks to the Joy-Con Controllers, (as well as own your own), but sometimes playing with a friend really is the best way to play. Although being so it is a game that supports touch screen controls, it can only be played in both Handheld and Tabletop mode, so if you were hoping for a World of Goo in TV mode experience, you won’t find it here.

As for the game’s content, while some good make a bid to argue it doesn’t have enough, since there are only 4 full Chapters, an Epilogue, as well as the bonus level World of Goo Corporation, there are in fact 48 levels in all and while you may think that it shouldn’t take you more than 5 hours to beat the whole game that’s not necessarily the case. Sure in order to complete each level, you’ve only got to build a Tower of Goo Balls to reach the pipe and make sure you have the required amount of spare Goo Balls in order to advance, but saying that and actually putting it into action are two completely different things.

Something which is easy enough to do when you’re starting out, but it soon gets trickier as the game goes when new kinds of Goo Balls are introduced, along with hazards that can delay progress and infuriate if you let it. Then things get even harder still should you wish to get the Obsessive Completion Distinction Flag on each and every level and take it from me, it is no small task. On some levels this bonus requirement could desire you to earn a couple more Goo Balls than usual. Or it could want you to complete the level in less moves, or worse, in less time. But if you are a true videogame completionist, then get the OCD flag on each level is a must.

Then of course there’s the game’s story, something of a bizarre tale that has something of an evil corporation and a dastardly scheme, Goo Balls being turned into all kinds of products (such as facial cream), which is revealed/told through a series of cut-scenes and sign posts that were left by the unseen Sign Painter. And that’s pretty much all I’m going to say about the story because while World of Goo is an old game, so many of us should know it already, for the purpose of this review, I refuse to spoil it, especially since we know for a fact that should a few of our readers play this game, they will enjoy it.

So because it’s nearly time we wrap this review up, there’s only one more major thing we should mention and that is of course the soundtrack. Solely for Switch, the original soundtrack for the game is accessible, just like it is for all of the Tomorrow Corporation Switch titles and it really is a welcome addition that makes World of Goo all the more enjoyable and desirable and just like that, it’s conclusion time.

As far as World of Goo goes, even if you brought it previously on another platform and played the hell out of it, if you like games that will challenge and delight you in the same instance, you might want to consider buying it again and if you’ve never played it, maybe you should consider giving it a try. It only costs $9.99 so while it’s not going to break the bank, I do need to point out it is not a game that will sit well with everyone, which includes myself. I have put in the same amount of time playing all three Tomorrow Corporation titles and while my Human Resource Machine review has yet to be written and posted just yet, I just couldn’t properly get “into” World of Goo, therefore I didn’t enjoy it as much as I could have. Unable to put my own personal feelings to one side, while World of Goo is the better game of the three, my favourite is easily Little Inferno. But because Goo is better, even I can admit that World of Goo does deserve an 8/10. So to answer the question that got this review underway, (how does it compare in this day and age), World of Goo is still something of a definitive title that holds its own against much larger games that had a huge budget to make them in the first place and well worth its asking price.

One thought on “[Review] The Wonderful World of Goo”