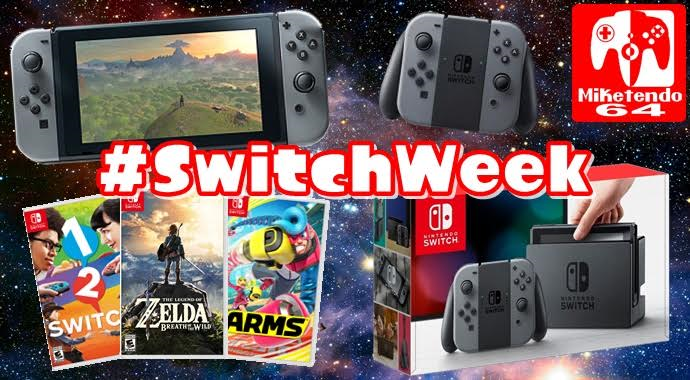 All Next Week It’s #SwitchWeek!

If you thought #FireEmblemWeek was going to be the only Them Week we host this month, you’re wrong because from the 27th of February to day’s end on the 5th of March, we will be hosting #SwitchWeek!

Why #SwitchWeek you may ask? Well for starters, the Nintendo Switch launches next week, and with it a whole bunch of launch titles that includes The Legend of Zelda: Breath of the Wild. It will also be the week where Switch Hype levels climaxes, so why not have a week dedicated to the forthcoming fun? After all, not only will be a lot of fun, but it will also be a week where we have a whole bunch of content planned, as we aim to have at least two Switch reviews posted, 3 Switch game interviews posted that includes Redout and Monster Boy and the Cursed Kingdom, but we’ve also got a few more podcast instalments of Let’s Talk About on the way as well.

There will also be constant Switch news coverage, a live stream on our Facebook page that will see one Miketendo64 staff member unbox a Nintendo Switch and a whole lot of other unplanned stuff as we do intend to wing some of next week’s content so that it is a surprise to us as well, so whatever does happen, #SwitchWeek does promise to be a rather special week indeed and we want you to share it with us! So please make sure you find the time to join us! We promise you won’t regret it!

#For the sake of repetition, #SwitchWeek begins February the 27th and ends on the 5th of March, 2017.