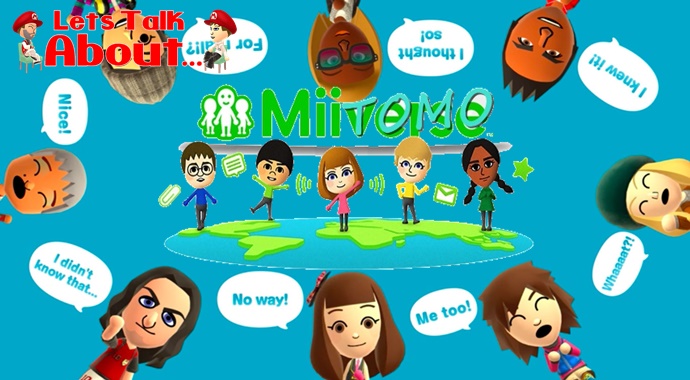 Let’s Talk About… Miitomo (Nintendo Could Make a Miiverse of it Yet!)

Hi, I’m Jack Longman, and this is Let’s Talk About, a written Miketendo64 feature series, where I express my views and opinions on all things Nintendo! Be it a singular game, a game series in general, consoles or even Nintendo’s latest activities, you can count on me to talk about it! In today’s piece, it’s a something of a mobile equivalent to Tomodachi. It’s free to download and easily forgotten and it just received a brand new update! Let’s Talk About Miitomo!

When Miitomo first released almost a year ago, it was nothing like the app we have access to now. It had less features, less appeal and didn’t exactly hold player’s attention for long, but it did have something to keep players coming back. That something was promotions, such as the Splatoon promotion, a Legend of Zelda: Breath of the Wild promotion, Kirby Café and even a Metroid Force promotion. These promotions didn’t just get players player again, but some mobile gamers actually downloaded Miitomo because they wanted the costumes and content available from the app.

But the promotions, no matter how they were handled, or they fact that they did help build interest in select Nintendo titles, unless Nintendo found a way of making Nintendo a hell of a lot better, it would only be so long before players lost all interest in it completely. Near the end of last year, a new update did roll out and it completely transformed the app! Not only was Miitomo far better than it once was, but it had become the app it was always meant to be, and Nintendo have been bettering it ever since, through more updates and features, which includes the most recent changes, of being able to add photos to your Mii’s and Sidekick Mii’s answers.

So as I sat my chair, with my phone in hand, passing the time of Miitomo, checking out the new features, it occurred to me that Miitomo is becoming more and more like a mobile Miiverse with every update. We may not be able to share screenshots directly from Nintendo platform playable games yet, but gamers can play Fire Emblem Heroes and Super Mario Run (if they have an iOS device) and take a screenshot in-game that we can now share to Miitomo and given the direction Nintendo is taking Miitomo, I think it’s only a matter of time before it is possible and thinking about it, it would make perfect sense if Nintendo did make it happen.

We’ve already seen Miitomo support Super Mario Run and Fire Emblem Heroes through promotions, and the fact that your Miitomo Mii can be used for Super Mario Run, so we already know mobile games do go hand-in-hand with one another. Furthermore with the Nintendo Switch not having any kind of Miiverse system in place, due to Nintendo choosing to go with another means of sharing content, it does make sense for them to take their mobile games, which are already shown to be connected and supporting one another, to make Miitomo the Miiverse for mobile games. Not only would it raise more interest in Miitomo, but it is something that seems to be happening already, so it would be foolish for Nintendo to not take Miitomo all the way.

I know some gamers might be put off by that concept, but as good as Miitomo is now, making it a full-fledged mobile Miiverse is the way to go. It is a direction Nintendo needs to go in. It’s the 3.0.0 update the game it needs, not to mention an even better way of promoting the mobile titles, as images of them would then flood Miitomo and see more players asking questions and raising further awareness of the games. So a Miiverse Miitomo isn’t just something that could happen, it’s something that should happen as far as I’m concerned and I could really be disappointed if it didn’t.

This has been a written Miitomo edition of Let’s Talk About. All views and opinions expressed are entirely my own and if you feel differently to anything I have said, then please by all means use the comments section below to have your say! I’d love to get your perspective on all this or you could give it a miss but recommend something else you’d like us to talk about instead! The choice is yours!