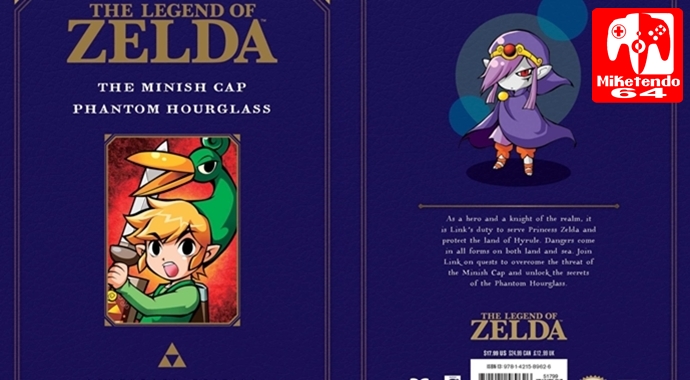 As someone who never brought the previous Zelda mangas, buying the Legendary Editions is a must for me, as well as staying up to date on anything related to the Legendary Edition. So naturally I troll amazon, waiting for the moment a new cover for the mangas would be reveal and lo and behold, Volume 4 finally has a front and back cover illustration, which you can see right here:

As of right now, Akira Himekawa’s Volume 4 (The Minish Cap & Phantom Hourglass), is available for pre-order at $17.99 dollars and releases on the 9th of May, 2017. A product description can be found below:

“Link must defeat evil at every turn in his perilous quest to help Princess Zelda!The Legend of Zelda: Legendary Edition contains two volumes of the beloved The Legend of Zelda manga series, presented in a deluxe format featuring new covers and color art pieces by Akira Himekawa.

As a hero and a knight of the realm, it is Link’s duty to serve Princess Zelda and protect the land of Hyrule. Dangers come in all forms on both land and sea. Join Link on quests to overcome the threats posed by the Minish Cap and the Phantom Hourglass.”

But since that is more than a few months away, both Volumes 1 & 2 are available now, with Volume 3 (Majora’s Mask and A Link to the Past) available next month. Also available next month other than the Nintendo Switch and long awaited The Legend of Zelda: Breath of the Wild, is Part 1 of the English version of the Twilight Princess manga. Click on the products below to be taken to their amazon.com listing:


Categorised in: Manga, Random, The Legend Of Zelda