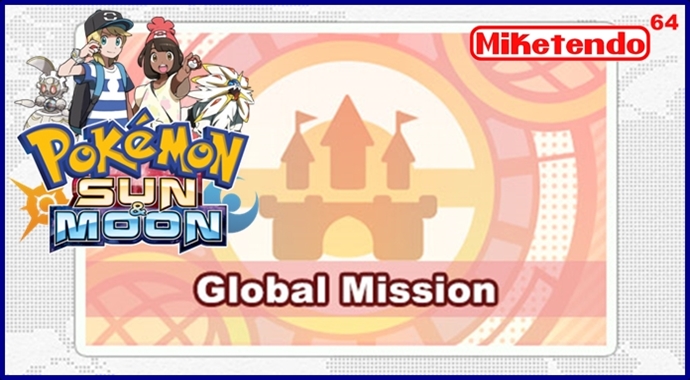 The third Global Mission is underway and while the last two events ended in failure, this time we must succeed!

In an event that requires us to collectively trade 1 million Pokémon through the GTS as opposed to catching 100 million, or 1 million Island Scan Pokémon, we should stand more chance of a success this time around. The reason why I would say such a thing is because the Pokémon Bank got the update it required, as did Poké Transporter, which allowed us to transfer a plethora of Pokémon to Gen 7 and while some do have them all, there are many trainers who have yet to acquire every known Pokémon and now they’ll be frequenting the GTS looking for the missing Pokémon to complete their collection.

Were players to emerge victorious from this event that is live right now and will end on the 14th of February, we will earn ourselves a rightful 2,000 Festival Coin (twice that for those who have a PGL account), but should we fail, we do get 200 Festival Coins. But if 2 million trades are registered during the global mission, than players will get their 2,000/4,000 Festival Coins, plus a Friend Ball. Here’s the official announcement in full:

The “Trade Pokémon at the GTS!” global mission is active in Pokémon Sun and Pokémon Moon through February 14, 2017, at 00:00 UTC. Remember to use Game Sync to contribute your tally of trades via the Global Trade Station to the total!

If everyone teams up to make 1 million trades at the GTS, you’ll receive 2,000 Festival Coins.

If you’ve signed up for a PGL account before the global mission ends and the global goal reaches 1 million trades at the GTS, you’ll receive 4,000 Festival Coins—but if 2 million trades are registered then the reward will also include a Friend Ball!

Here’s how you can join the fun:

You don’t need to be a Pokémon Global Link member to participate in global missions, but as a bonus, players who have registered their Game Sync ID at the PGL will earn double the Festival Coins, and any PGL member who reports five or more trades will earn five Rare Candies!

Check out How to Participate in Global Missions if you’d like a more detailed walkthrough.

Best of luck with the mission Trainers. May victory be hours!