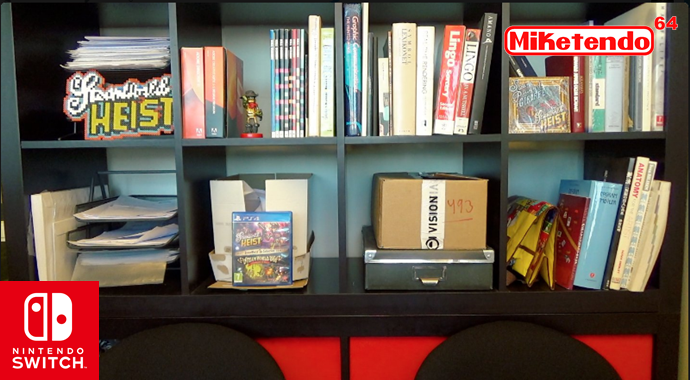 Image & Form Tease SteamWorld Project 2017 & What Appears to be a Rusty amiibo!

Image & Form Games aren’t quite ready to reveal the name of SteamWorld Project 2017 just yet, but they aren’t afraid to tease us about it on Twitter.

We're bringing SteamWorld Project 2017 to PAX East in March! Which means the reveal is not far off. Can you find the hint(s) in this pic? pic.twitter.com/mbjdjKCJOz

Now if you ignore the SteamWorld Heist memorabilia, and the book with 493 on it, as well as the books on lingo and anatomy, on the top row, close to the left hand side of the image, you can spot what appears to a Rusty amiibo! Should the figure actually turn out to be an amiibo, then it would mean that this game could in fact be a continuation to SteamWorld Dig, and sees the return of Rusty and explains what happened to him after the end of Dig. But then again, it could easily be a custom amiibo meant that was made and then placed to tease us further.

Regardless though, we do know the new title will be playable at PAX East and with the event taking place during March, the reveal will either happen then, or sometime in the coming weeks.