Releasing on the 2nd of February: Fire Emblem Heroes 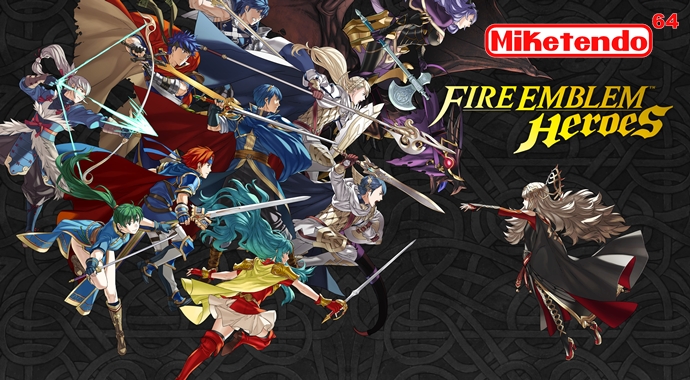 We’ve waited a long time to hear something regarding the Fire Emblem mobile game and now we finally got it, footage and a fact sheet that tells us almost everything there is to know about it right now, which includes in-app purchases and the fact you will need a constant working internet connection:

“Fight battles customized for touch screens and on-the-go gameplay. Summon characters from across the Fire Emblem universe. Develop your Heroes’ skills, and take them to new heights. This is your adventure—a Fire Emblem that’s like nothing you’ve seen before!

Take part in strategic turn-based battles streamlined for on-the-go play with maps that fit in the palm of your hand! You’ll need to think hard about the advantages and disadvantages of each Hero’s weapon—and even evaluate the map itself as you battle. Lead your army with easy touch and drag controls, including the ability to attack by simply swiping an ally over an enemy.

The game features numerous Hero characters from the Fire Emblem series and a few brand-new Heroes created by artist Yusuke Kozaki, known for his work on Fire Emblem Awakening and Fire Emblem Fates. Some Her+D3oes will fight at your side as allies, while others may stand in your way as fierce enemies to be defeated and added to your army.

*Many modes let you play again and again:

In addition to the main story, there are many other modes where you can strengthen your allies, compete against other players, and more. Also, free and timely updates will continue to add new Hero characters, content, and other surprises to keep you engrossed with hours of additional gameplay.

Battle together with your favorite Heroes, watch them grow, and enjoy an all-new adventure that opens up a path to the future.”

But like I said, the fact sheet information tells us almost everything there is to know, to learn the rest of it, you will want to visit the website below as that is the official Fire Emblem Heroes website:

Also while no release date has been given for the iOS version of Fire Emblem Heroes has been revealed, Android owners can pre-order the game now from the Google Play Store and of course visit the website to take part in the Choose Your Heroes event. An event that provided you sync your My Nintendo account to, can earn you Platinum Points, as long as you cast your ballot you’re your chosen Hero, something you can do from today (the 19th of January), to the 1st of February. But why is it so important to cast our votes? Well the answer is because the Top Votes Hero and Heroine will be in Heroes as Special Versions.

And since this isn’t everything that was revealed, let’s tackle that as well. So as a Summoner, (like is said much higher up), you can summon Heroes from previous Fire Emblem titles and assemble your dream team. The maps are 6×8 and to attack an enemy, you can either drag an ally over to them or use traditional Fire Emblem controls, but make sure to study your surroundings as some maps require precise planning to ensure victory. And a little something fans will really enjoy, Heroes even features the iconic weapon triangle systems.

As far as reveals go, Nintendo hit it out of the park with this one. They did a great job of shoving this game down our throats and spouting a whole ton of information that we’ll most likely forget about in the morning, but Heroes is going to be insane. There is just so much to do once “The Battle goes Mobile,” but most of all I’m just chuffed that the majority of my Fire Emblem Heroes rumours and leaks turned out to be true. Sure my leaks did get some things wrong, but they got a lot right and the rest, well they were neither confirmed nor disproved, so that’s still a win.

All I know is Miitomo and Super Mario Run did not prepare us for this. However contrary to what the image below says, on Twitter Nintendo of America has confirmed Fire Emblem Heroes will be coming to both android and iOS devices on the 2nd of February.

One thought on “Releasing on the 2nd of February: Fire Emblem Heroes”