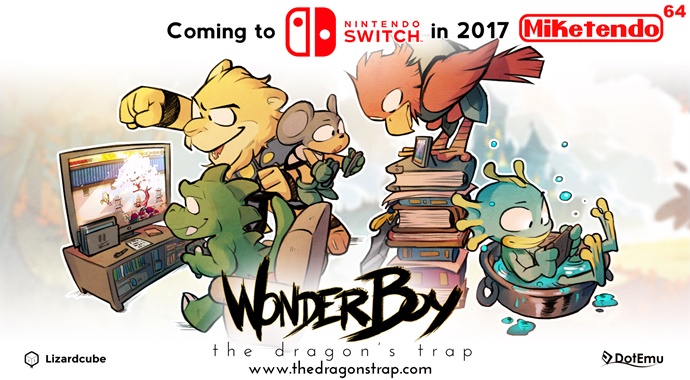 Wonder Boy: The Dragon’s Trap is also confirmed for the Nintendo Switch with a March 2017 worldwide release and below you can find the official announcement:

“It was hard to keep the secret, but finally we can spill those edamame beans…Wonder Boy: The Dragon’s Trap is coming to the Nintendo Switch™ in 2017!

A few months ago Nintendo contacted us. A reunion was held in mushroom kingdom under a veil of absolute secrecy, where they suggested we could bring the game over to their upcoming platform. Needless to say it was a unique opportunity and as soon as we saw the system we knew we wanted to get the game on it. We started working on it and well, HERE WE ARE!

The game plays fantastic on the Nintendo Switch! It runs at a smooth 60 FPS, the screen and colors in handheld mode are amazing, and it plays just as well in full HD when docked. We can’t wait to show you more!

In the meanwhile, you can check out the official console page if you would like to know more about the Switch (available worldwide in March 2017!).

If you don’t plan to dock yourself on the Switch bandwagon just yet, rest assured, the game will also be coming to other platforms! We will announce them as well as the game release date as soon as we are ready… and we’ve got a bunch of other cool news coming.”