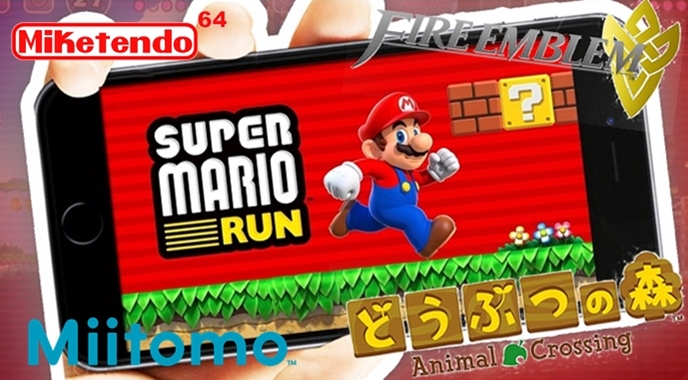 During a recent discussion/interview with Kyoto Shimbun, Nintendo President Tatsumi Kimishima spoke out about Nintendo’s plans of bringing out 2 to 3 titles every year, starting in 2017. Bit odd for him to “starting in 2017” due to the fact that Nintendo did in fact bring out Miitomo and Super Mario Run, although it’s probably due to the fact Miitomo is more of an application than an actual game. Still 2 to 3 titles is something to look forwards, especially since we already know Fire Emblem and Animal Crossing are due to release before March, with a previously mentioned 5th game due out later on in the year.

Since no actual details have been given on either Animal Crossing and Fire Emblem titles, I’m assuming both mobile titles would be a lot like Super Mario Run, in that they too will feature a one-off payment and while anything could happen in the Animal Crossing game, although I suspect that it will be a lot like Miitomo, whereas Fire Emblem will be a game that features a similar speed and flow of Super Mario Maker, consisting of high-paced battles across a mid-sized map.

Although since Kimishima had more to say, let’s get back to that. Still talking to Shimbun, the Nintendo President exclaimed that (at the time they spoke), Super Mario Run had amassed 40 million downloads which meets their expectation, but he does believe that it could be downloaded another 60 million times, which it will, just as soon as it comes to Android. He also said thay Nintendo are listening to user input regarding Super Mario Run, to ensure it is the very best experience it could be and that the number of paying players is very high.”

Lastly, he discussed in-app purchases and microtransactions, saying parents need not worry and that the Nintendo smartphone titles are one of Nintendo’s three pillars, which supports their console column, as Nintendo believes it will expand their player base, and it is.