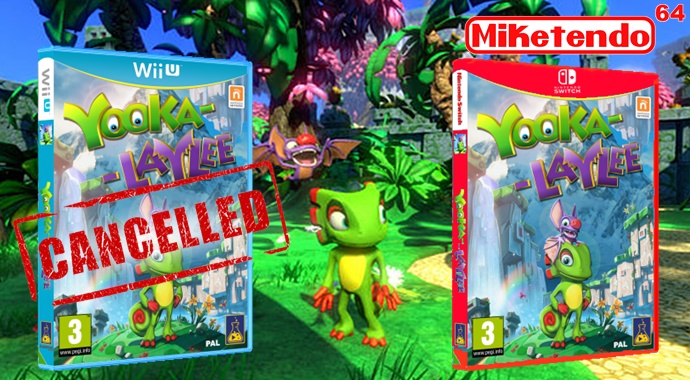 What comes as a sudden turn of events but not too surprising (yet still shocking), Yooka-Laylee will no longer be coming to the Wii U. After some development difficulty, the team at Playtonic Games have instead shifted their focus to bringing it to the Nintendo Switch. The Release date has been listed for April 11th for PS4, XBox One, PC, Mac and Linux but no mention as to when it will be coming to the new Nintendo Platform. It is said that Playtonic Games is currently in talks with Nintendo to bring Yooka- Laylee to the Nintendo Switch instead. Yooka- Laylee will be retailing for around £34.99 / $39.99 / €39.99 for non Kickstarter backers.

Here is a statement from Playtonic Games about the Switch from Wii U to Nintendo’s Next Gen console.

After many challenging months, we’re finally able to update you on the Wii U version of Yooka-Laylee and announce a number of developments.

The Playtonic team is sad to confirm that despite our best efforts and exploring every possible avenue, we’ve encountered unforeseen technical issues that unfortunately mean it will be impossible for us to release the game on Wii U as initially planned.

We can however confirm the exciting news that we are now working very closely with Nintendo to look to bring Yooka-Laylee to the upcoming Nintendo Switch. We’re looking forward to exploring the opportunity and will have more details to share early next year.

We’d like to apologise to those affected by this development and offer all Wii U backers the opportunity to move their pledge free-of-charge to any of the versions launching on April 11th (PS4, Xbox One, PC, Mac or Linux) or upgrade to the Nintendo Switch version when we announce further details in 2017.

Information on how backers can change their formats will arrive in January, once we’ve finalised the smoothest possible solution. For more details on our platform change, we’ve prepared a Yooka-Laylee Wii U FAQ page.

The Playtonic team thank you for your continued support and understanding on this issue and hope you look forward to future developments on the Nintendo front. We hope, in the fullness of time, we can make Nintendo platforms a great place to experience Yooka-Laylee – and beyond.

On the plus side, Playtonic have release a new trailer showing a new level you will be able to experience in Yooka-Laylee, Capital Cashino! You can watch it below.