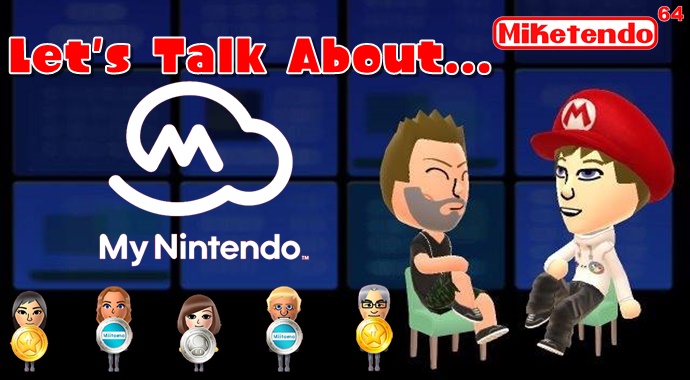 Let’s Talk About: My Nintendo (5000 Platinum Points and Counting)

Hello and welcome to yet another instalment of Let’s Talk About, our series of discussion posts and videos dedicated to all things Nintendo! Be it a singular game, a game series in general, consoles or even Nintendo’s latest activities, you can count on us to talk about it! So with that in mind, today we dedicate this penned piece to Nintendo’s very own reward system, My Nintendo.

When it was first announced Club Nintendo was in fact getting a successor rewards program for us Nintendo gamers to take advantage of, I eagerly awaited its launch and then when it did finally come out, it was great, for a while. Earning points has never been easier and with the likes of Miitomo, an app which when it first came out, enabled users the chance to acquire 35 Platinum Points a day, but from day one there has never really been great rewards to redeem your points on. What good is racking up Gold Points every time you purchase a digital title, only to then have the rewards turn out to be discounts for the games you have just brought? Forget bad timing, that’s just bad taste.

Admittedly the rewards that ask for Platinum Points have been better, not just in price, but in what they offered as well, but just because they’re better, let’s not get carried away with deluding ourselves that they’re the best things either. Especially when the majority of the possible rewards have been 3DS related (themes, games such as My Nintendo Picross: The Legend of Zelda: Twilight Princess & WarioWare: Touched! and the application Flipnote Studio 3D), whereas the rest have pretty much been Miitomo centred. Don’t get me wrong, I actually liked a few of the Miitomo clothing items one could purchase with their points, but the rewards are not just as good as they could have been.

I am not demanding Nintendo does physical rewards, it would be great if they did because I think we’d all spend our Platinum Points and Gold Points on those, but earning Platinum Points does take time and when several months pass by and there hasn’t really been any must have items, the points soon add up. As of now I have more than 5000 Platinum Points begging for me to spend them before 162 of them expire next month, (and 1328 the month after), but when I try to log onto the site and spend them, there’s just nothing in the rewards section I want and the ones that I do want, are only available in other regions. One reward in particular is the Zelda 30th anniversary 3DS theme. I would gladly pay 300 Platinum Points, or even a 1000 if I had to, but that’s a reward that is not currently available in Europe. It is however available to Japan and North American based users.

Personally speaking, My Nintendo is not the rewards program it could be, scratch that, it’s not the rewards program it should be. Nintendo were right to bring a system such as this back into effect, but they need to add better rewards and to push it more. I’m not just talking about having it go hand in hand with Super Mario Run, but make it work with more than just their mobile games. They need to find a way to make it work with the 3DS better and the Nintendo Switch. I would say the Wii U, but we all know that’s going to happen.

Now I would say they are on the right path as they have already revised some of the missions for users to accomplish, and they have made some alterations to the site, but My Nintendo does have a long way to go to make it something we can actually enjoy and make us strive to earn those points. Nintendo made Miitomo so much better, so they should be able to do the same here, but they did make a huge mistake by not incorporating it with Pokémon GO. Yes the app has almost next to nothing to do with Nintendo, but if Pokémon GO supported My Nintendo, then every time we brought some more Poké Balls, we could earn ourselves some more Gold Points and that would have been a win-win. In fact it might have even tempted more of us to spend our cash and make the ones who were spending often, spend even more because they knew they could then use those points to save a bit of cash when they buy their next digital title, but this didn’t happen and that is a terrible mistake on Nintendo’s part.

So to summarise, My Nintendo isn’t perfect and not that we should expect it to be, but it wants some work done to it to ensure it sticks around a lot longer than Club Nintendo did and if Nintendo can’t ensure top quality and physical rewards, they should at least put out more rewards we’re likely to splurge our points on. Also a couple of new games wouldn’t hurt either, another My Nintendo game would be great but most importantly, Nintendo needs to spend more time on making it compatible to all of their platforms and the games that can be playable on them, as opposed to limiting it mostly to their mobile applications. Oh and giving European My Nintendo users the option of purchasing the Zelda 30th theme would be great too, I need something to spend my points on before they expire at the end of next month.

This has been the written My Nintendo edition of Let’s Talk About. All views and opinions expressed are entirely my own and if you feel differently to anything I have said, then please by all means use the comments section below to have your say! We’d love to get your perspective on all this or you could give it a miss but recommend something else you’d like us to talk about instead! The choice is yours!


Categorised in: Jack Longman, Let's Talk About, My Nintendo