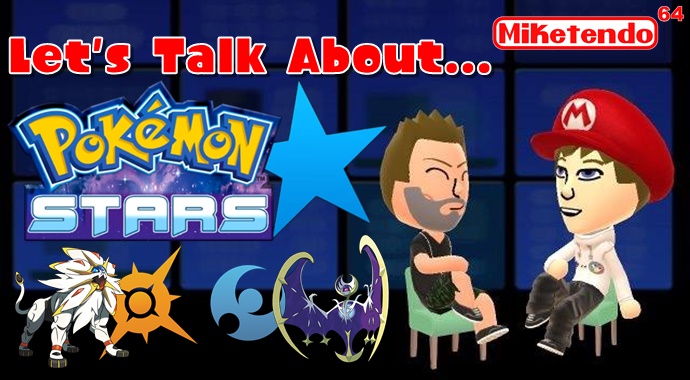 Let’s Talk About: Pokémon Stars (The Things We Want to See)

Hello and welcome to yet another instalment of Let’s Talk About, our series of discussion posts and videos dedicated to all things Nintendo! Be it a singular game, a game series in general, consoles or even Nintendo’s latest activities, you can count on us to talk about it! So with that in mind, today we dedicate this penned piece to codenamed Pokémon Stars.

If the reports and rumours are true, Pokémon Stars is the huge Pokémon title we can expect to see release on the Nintendo Switch in the second half of 2017 and I can’t wait! Having spent the last two weeks very hands on with both Pokémon Sun and Pokémon Moon, I am in love with these latest offerings. I was there when Pokémon Red & Blue took the world by storm, just like I am here now as Sun & Moon are doing the same.

Being the third instalment of a single generation that it is, the modern day Yellow, Stars is going to be the same great game we know the others to be, but packed with so much more. HD graphics, more Pokémon and possibly even more locations. It’s going to be brilliant, it’s going to be incredible, but goddamn it I want a male Salandit evolution option! Salazzle is great, but trying to catch a female Salandit takes time and sure she is worth it, just like Gardevoir is cool, but so is Gallade and a male Salazar would be incredible. If any of new Gen 7 Pokémon deserved to have two evolved forms, it is without a doubt Salandit but Salandit isn’t the only one I want to see evolve.

Other Pokémon I would like to see evolve are of course Komala and Minior. Sure they seem okay as standalone Pokémon, but an evolution would be great nonetheless. With regards to Drampa, although an evolution isn’t necessary, a pre-evolved form is. Sure raising Dragon-types take longer, but I like my Dragons and I like making them evolve and I didn’t get to do that with Drampa and that really sucked. As for Mimikyu and Bruxish, I hope they don’t get an evolution, they are both perfect as they are, just like Wishiwashi.

Something else I would like to see, especially since it was reported there are to be more “new” Pokémon, as in more Gen 7 Pokémon, I hope there are some more Alolan forms for us to encounter, sure Alolan Arcanine, Alakazam and Machamp are out the window, but what about Alolan Arbox, Alolan Weezing and Alolan Jynx? They would make for a perfect addition to the extended Alola region Stars offers. The Switch versions needs more Alolan variants, whether they be Gen 1 or even Gen 2 variants.

One thing Stars doesn’t need though is more Ultra Beasts. While I did enjoy that mission in the post-game phase, and I enjoyed catching and trading for them all, I think we’ve seen more than enough of Ultra Beasts as far as Gen 7 is concerned. If Game Freak wish to bring them back for Gen 8, by all means go for it, but Gen 7 has more than enough (7 in fact). So although they could extend the post-game UB mission by including an extra beast or two, I think the game would be better off adding by adding a little more to the story, say enabling the player to go to Kanto to see Lillie for a small post-game adventure, or by bringing her back and giving the player one last one last adventure with Lillie in Alola.

As for other things they could do to make Stars better, I’m not actually sure there is anything else. Yes Sun and Moon are very different to the other games in the main series, but they without a doubt one of the best gens in the entire series and the games themselves are as close to perfection as close as you can get. As far as Stars go, Game Freak could add hardly anything to it, and it would still be a brilliant title, especially to the millions of gamers who haven’t played the 3DS versions. But this is Game Freak we’re talking about, of course they are going to add more to it and make Stars the definitive instalment that Gen 7 has to offer, much like how Yellow was the definitive version for Gen 1.

So to summarise, while there are a small number of things I would like to see brought to life in Pokémon Stars, it really doesn’t matter if they do are don’t happen. Stars is going to blow our socks off regardless so even if you own both Sun and Moon, if you’re buying a Nintendo Switch, then the codenamed Pokémon Stars is a must have title, because as far as Alola goes, we have only scratched the surface.

This has been the written My Nintendo edition of Let’s Talk About. All views and opinions expressed are entirely my own and if you feel differently to anything I have said, then please by all means use the comments section below to have your say! We’d love to get your perspective on all this or you could give it a miss but recommend something else you’d like us to talk about instead! The choice is yours!