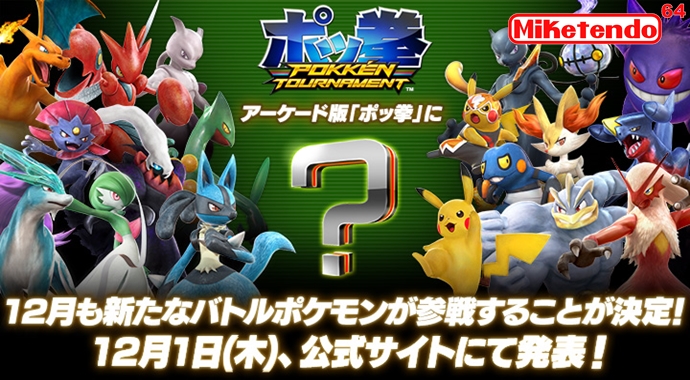 Once more it has been confirmed that the arcade version of Pokkén Tournament, is to receive a new fighter and while Empoleon is as good a guess as any, what with having its data previously discovered in update data for Wii U version, along with Darkrai and Scizor, let’s not forget about what happened last month.

Croagunk was a huge surprise to a lot of us and the same thing could happen once more on December 1st when the latest fighter to come to the arcade version of the game is announced. Should that be the case, another support Pokémon could be getting Fighter status!

But that’s not the only thing that is uncertain because the previous fighters who have yet to grace the Wii U version, have all been previously revealed during Niconico broadcasts, only there hasn’t been any news of one happening this week, so unless one is suddenly announced, the news could be coming another way. What would be nice is once this fourth combatant is revealed, is Bandai Namco do turn around and say new dlc for Pokkén Tournament is in the works, but we’ll have to wait a month or two.

Regardless of what happens and who is revealed, you can expect to see some new Pokkén news right here this week!