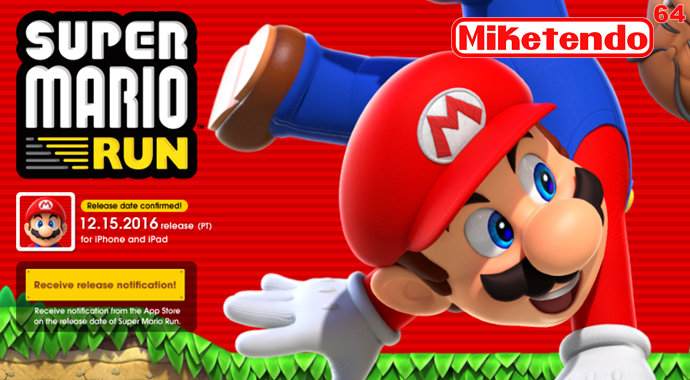 We’ve been eagerly awaiting a release date for Super Mario Run and now we’ve got one, the 15th of December!

Exactly one month from today, directly from the App Store, anyone with an iPad or an iPhone or both, will be able to download the first true mobile game that stars one of Nintendo’s most iconic protagonists’, for free with the option of purchasing access to the full game. Anyone who doesn’t pay the one time payment of £7.99 pounds ($9.99 US dollars or €9.99 euros if you’re in Europe), for the full Super Mario Run ride, will still be able to play the game, only they will have a very limited experience. An experience which consists of being able to try out any of the following modes:

*In order to play Toad Rally, you will need Rally Tickets that you can acquire a variety of ways, such as clearing world or through bonus games in your kingdom.

*There are over 100 kinds of items in the Kingdom Builder feature!

For anyone looking to pick up the title next month, you will need to make sure your iOS device is operating on iOS 8.0 or later and just in case you wanted to check out the official announcement, you can either click here, or scroll down:

“The first-ever mobile game featuring the most iconic video game hero of all time goes on sale for iPhone and iPad on 15th December in Europe. Super Mario Run can be downloaded from the App Store at no cost, and players can try elements of the game’s three modes for free. Once the game has been downloaded, a one-time payment of £7.99 will grant unlimited access to each of the three modes in this release.

Super Mario Run is the first Super Mario Bros. game developed specifically for mobile devices. In the game, Mario runs forward on his own, but relies on the tap of a single finger to jump over obstacles, avoid enemies and reach the flagpole to complete courses.

For more information about Super Mario Run or to pre-register for the game, visit https://supermariorun.com/en/index.html.”

With Super Mario Run & Super Mario Maker 3DS and the very low possibility of a Super Mario Galaxy 3 release next month, it seems the future is indeed coming up Mario! And since no one else has said this yet in their articles, sorry Android users, there’s been no mention with regards to the Android release of the app.