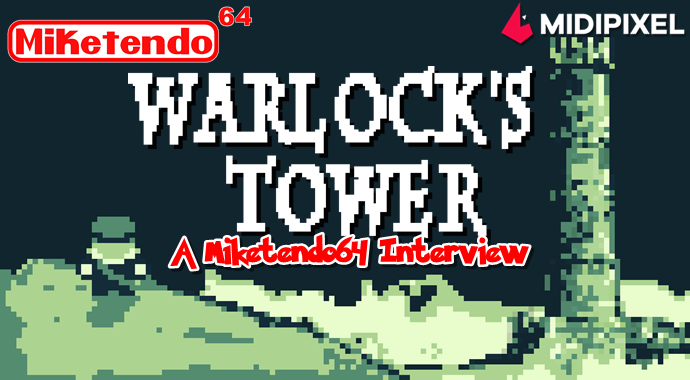 Coming soon to Steam is Warlock’s Tower, a ‘punishing puzzler with elegantly designed levels around one simple rule – one move equals one life lost. Watch your step!’ And once out on Steam, next year it’s coming to the Nintendo 3DS!

In light of this, Team Miketendo64 are most definitely interested in learning more about this indie title coming to multiple platforms and the people behind it, so we reached out to Midipixel Studio and asked a whole bunch of questions! Not only did Midipixel answer them, but they’ve sent them back, we can now share them with all of you! Brace yourselves, for this is our Warlock’s Tower Q&A with Werther Azevedo:

Miketendo64: “Before we even begin to talk about Warlock’s Tower, let’s talk about you. Who are you? What is your role with regards to Warlocks’ Tower and how did Midipixel Studio come to be?”

Werther Azevedo: “Well, I’m half of our small two men studio. I’m a composer/designer with 10+ years of experience building interactive stuff. Production-wise, I’m usually more focused on artsy duties, such as audio and visuals, but as a designer by trade, I also design levels and discuss high level game design ideas and concepts with Ygor.

Midipixel was born in 2013, after the game studio where we worked, Nano Studio, ceased its activities. Ygor and I had already talked several times about our game ideas and we had (and still have) many affinities in our tastes and beliefs as designers. So, we decided to give it a try. At first, we focused on client work, exploring our ideas during the spare time. But since Warlock’s Tower was awarded at SB Games, we decided to focus on it full time. Or at least, almost full time, since we’re also teachers!”

Miketendo64: “With Warlock’s Tower coming to Steam in January 2017 and then other platforms, including the 3DS in the months that follow, the end is within sight. How have you found the process of developing Warlock’s Tower?”

Werther Azevedo: “The process was tortuous and chaotic at the beginning, since we only got to work on the game in small bursts. To be honest, Warlock’s Tower was first intended to be a quick game with a nice mechanic, but as it grew on us, it also grew in scope! After the award, we started addressing it in a more orderly manner, with decent project management habits.

My favorite moments were probably the happiness injections we got on two occasions: First, when we won the award. Then, when we presented the game at BIG Festival and the reception was really beyond our expectations.

Worst moments? hmmm… In the beginning, it was really hard to find motivation to work on the game, between heavy amounts of dull client work. So, I don’t remember those times so fondly. Also, my first attempts at pixel art were painful, as I thought I wouldn’t achieve a level I’d be happy with, but fortunately, it happened.”

The Inspiration Behind Warlock’s Tower:

Miketendo64: “Where did the inspiration for Warlock’ Tower come from?”

Werther Azevedo: “The main mechanic, where each step costs you one life point, is an original concept that Ygor came up with many years ago. Although not directly inspired by Sokoban, we can’t deny that the game pertains to this family of puzzle games. The game’s aesthetic is, of course, inspired by Game Boy classics, such as Pokémon, Legend of Zelda and many others. I’ve always been fascinated by the idea of making a game that looks and feels authentically retro, but is enhanced by modern game design concepts and technology. And that’s exactly what we’re trying to achieve with Warlock’s Tower.”

Miketendo64: “Well it certainly looks and sounds like it is paying off.”

A Crazy Warlock & Saving the World!:

Miketendo64: “Now Warlock’s Tower isn’t all just about complex rooms and puzzles, there’s a letter to deliver as well. Any chance you could paint us a clearer picture of just what exactly is Warlock’s Tower and what it is all about?”

Werther Azevedo: “Warlock’s Tower is a game defined by its core mechanic. So the game indeed is about complex rooms and puzzles first and foremost, while the layers of content arise from there. Although we truly value this extra layer, its purpose is mostly to amuse the players with jokes, nice characters and a general feel good atmosphere. The plot is simple: There’s a crazy Warlock sucking the world dry with his tower, and your mission as a mailman is to deliver him a peace offering and, thus, save the world!”

3DS is the Only other Confirmed Platform for Warlock’s Tower:

Miketendo64: “You’ve already confirmed the 3DS as one additional platform for Warlock’s Tower, any chance of bringing it to another Nintendo platform such as the Wii U, or solely the 3DS?”

Werther Azevedo: “For now, we are targeting only the 3DS. After all, it’s the great-grandson of the venerable Game Boy!”

Playing with a Friend:

Miketendo64: “Warlock’s Tower lets players play with a friend, can you elaborate on how the multiplayer function works?”

Werther Azevedo: “Warlock’s Tower offers tag team mode in some levels. Although it is really fun to play those levels with a friend in a hot seat manner, I wouldn’t call it a multiplayer game, since we didn’t design the game around co-op playing from start to finish. What we do observe is that people really enjoy watching others play and giving opinions on how to solve levels, so that’s a plus!”

Miketendo64: “Zombies, slimes and flying eyes make for great hazards, which one is your favourite?”

Werther Azevedo: “Probably the zombies, since they’re the most stupid of the lot, so designing levels featuring them has brought me some good laughs!”

Hands on With Warlock’s Tower:

Miketendo64: “Having play-tested the game yourself, how does WT compare to other indie games available in today’s market and how many hours have you put into it yourself?”

Werther Azevedo: “In terms of mechanics, WT is comparable to just a handful of published indie games I know of. A Good Snowman is Hard to Build” and “Nova-111” come to mind. There are also some cool similar puzzlers in development, such as “Keen”, “Puzzle Depot” and “Ernesto”. Apart from those, there are a lot of indie puzzle/platformers on the market, but we couldn’t find that many traditional hardcore puzzlers, so that has been one of our motivations. As for hours I’ve put into it? I’ve totally lost count… Looong play sessions for each level I design!”

Miketendo64: “If you weren’t working on WT, what would you be doing instead? Working on another game you come up with, or doing something else entirely?”

Werther Azevedo: “Definitely working on one of our many other game ideas!”

Return of the Retro!:

Miketendo64: “8-bit games have made quite the comeback in the last couple of years, have you played many of them and have a favourite title?”

Werther Azevedo: “I’m sad to say that I’m one of those gamedevs that spend so much time making games that I don’t get to play them that much anymore. Shovel Knight and PPP are still on my backlog, but I’ve played some, like Downwell (incredibly polished), Retro City Rampage (funny as hell), Environmental Station Alpha (cute Metroidvania), and others I don’t recall now. Apart from that, I’m always impressed by the awesome stuff that devs have been releasing for the PICO-8 fantasy console.”

Miketendo64: “Well since we’ve touched on 8-bit games and Warlock’s Tower being the 8-bit 80’s looking game it is, you are clearly a gamer with a retro taste. What are your favourite 8-bit games and what is your fondest 8-bit gaming memory?”

Werther Azevedo: “Oh, boy! The list is extensive! My dad had a video rental store, so I had LOADS of Nintendo 8-bit games. I loved so many of them… The Bugs Bunny Crazy Castle, Contra, SMB 3 (best ever), Double Dragon, Guerilla War, Bubble Bobble, River City Ransom, Punch Out, Tecmo World Wrestling, Skate of Die, TMNT2…

My fondest memory is probably playing Contra and other co-op games with my friends. Good times!”

Go Hard or Go Home with the Final Floor of Warlock’s Tower!:

Miketendo64: “Is there anything else about the game that we don’t know already that you can tell us?”

Werther Azevedo: “Yes, I can tell you that the last floor will have some neat surprises, a core mechanic twist and INSANELY hard levels with every mechanic in the game combined!”

Midipixel Weigh in on the Nintendo Switch:

Miketendo64: “Nintendo have unveiled the Nintendo Switch. What do you make of the console? Will you be getting one and can we hope to see WT or even a future Midipixel title release on Nintendo’s next home console?”

Werther Azevedo: “I’m not usually affected by hype, but the Switch seems to offer what I’ve always wanted in a console: Being able to transform my main system into a handheld. I’m usually more into handhelds than the bigger consoles, but they’ve always been somewhat limited in comparison to their “big brothers”. So, I’m stoked about having a powerful system to take with me wherever I go. I’ll probably be getting one and, if WT’s reception from 3DS players gets to be as positive as we expect, we’ll be eying the Nintendo Switch, for sure.”

An RPG Title is Next on the List for Midipixel Studio:

Miketendo64: “Lastly when all is said and done with Warlock’s Tower and it has released on all your chosen platforms, what comes next for Midipixel Studio?”

Werther Azevedo: “It will all depend on the game’s success, but we really want to make an RPG title next. Ygor and I are die-hard RPG fans (his knowledge of tabletop systems is encyclopaedic), so that’s what we’re aiming for.”

Now I don’t know about you, but a retro looking RPG done by Midipixel is a game a lot of us can get excited about, but that won’t be for a long time, provided the guys are dedicate themselves to such a project. So because that is a huge what if, we may as well spend the present eagerly anticipating the release of Warlock’s Tower, because it does have the look of a retro game that will become our next 8-bit addiction and I for one can’t wait to try it! And since I’ve said enough, it’s back to Werther for the final word, a message for the fans:

“I hope that you all give Warlock’s Tower a try! We really poured a lot of love into it, and I believe we accomplished the mission of developing a game that could be a Game Boy hidden gem! We’re really proud of our little game and hope everyone that plays it feel the same.”