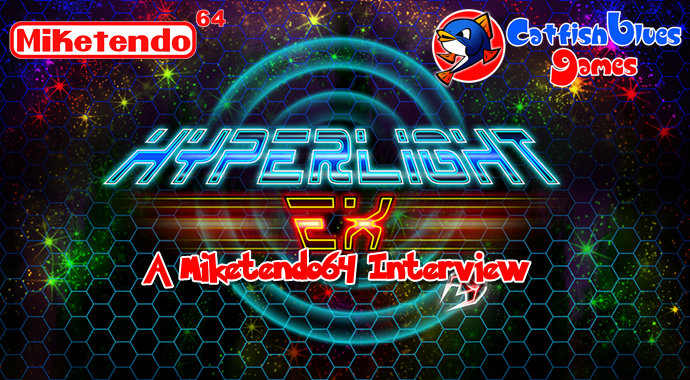 In 2011, developed by CatfishBlues Games, Hyperlight released on mobile devices. Psychedelic and super-fast, it offered an innovated gaming experience and now fast forward five years, Hyperlight is Hyperlight EX and Hyperlight EX is coming to the New Nintendo 3DS!

With the release due to occur this month, we caught up with CatfishBlues Games to learn a little more about the game and now that we’ve got the answers back, it is time to share them with all of you! Brace yourselves, for this is our Hyperlight EX Q&A:

Miketendo64: “Just to get it out of the way first, as far as the November release goes, any chance you can narrow the release date even further?”

Alessandro Avigni: “We will announce price and release date shortly. I can say the game will surely be available by the end of November.”

Why Hyperlight EX is solely Coming to the New 3DS:

Miketendo64: “Was Hyperlight EX ever considered to release on the regular 3DS as well or solely the New 3DS?”

Alessandro Avigni: “We started developing Hyperlight EX for the old Nintendo 3DS model, but during development we found some performance issues due to an overload of sprites and particle effects on screen, so to not limit its visual quality we decided to publish it only for the New Nintendo 3DS at its fullest.

All the graphic were redesigned, it has a new soundtrack, new boss battles were added while enhancing the previous ones. We also added new bonus weapons and entities, more levels and a new game mode.”

Bringing Hyperlight to the New 3DS:

Miketendo64: “What made you decide to bring Hyperlight to the 3DS in the first place?”

Alessandro Avigni: “We think Hyperlight is an extremely hardcore game that fits perfectly in a portable console with physical controls. It is the most console-quality hardcore game we developed for mobile so it was the right choice, it was quite ready for a “real” console-type setting.”

From Mobile to Nintendo Handheld:

Miketendo64: “Since Hyperlight started out as a mobile game, how have you found porting the game over to the Nintendo 3DS platform?”

Alessandro Avigni: “The process of porting it from mobile (iOS / Android) was quite straightforward with no particular difficulties. We decided from the start to not only do a simple port but to purposely do a better version of the original game to console users. Hyperlight EX is an enhanced version of the original one with many improvements in all areas.”

Miketendo64: “Having play-tested the game yourself, how does the new version compare to the original game?”

Alessandro Avigni: “This new version of Hyperlight was developed for a console-like experience from the start. It support physical controls opposed to virtual-touch controls and tilting of the mobile version. This is the main difference that changes completely the way you play it, and thanks to this the gameplay is now fully enjoyable by everyone.

Also, as already said, arts and musics are much improved and so the gameplay. This is the best version of the game ever!”

Miketendo64: “Let’s do a little roleplay. You’re you and I’m someone who has never played/heard anything about Hyperlight EX & the original version. Just exactly what is Hyperlight and how does it compare to most games in today’s market?”

Alessandro Avigni: “Hyperlight is a really innovative arcade-action game! You can think of it as a shooter without shooting (as it was defined), a game in which you can turn your spaceship itsefl into a powerful weapon, a bullet-like comet that can destroy enemies physically without shooting anything at them. If you played shoot’em up games like Geometry Wars or mobile games like Tilt To Live, then you can imagine Hyperlight like a mix of those type of games. But with its unique design and gameplay!”

Hyperlight EX is the only CatfishBlues title we can Expect to See on the Currently Available Nintendo Platforms:

Miketendo64: “Lastly, are there any plans to bring any of your other games over to a Nintendo platform, such as the 3DS, the Wii U or even the Nintendo Switch?”

Alessandro Avigni: “Hyperlight EX for New Nintendo 3DS will be our only title for the current Nintendo platforms. However, we were really impressed by the Nintendo Switch presentation and its great potential! We would love to work again with Nintendo on that new exciting platform.

We already have great ideas for Nintendo Switch and its peculiar local multiplayer on the go, but more on this at a later time!”

Miketendo64: “Well, I for one look forwards to that!”

In recent months a ton of great indie titles have come to both the Wii U and the 3DS and they have brought us some memorable hours of joy and Hyperlight EX is no exception. It is a title many of us will enjoy, especially since CatfishBlues Games have put a lot of work into making a good game even better! And since I’ve said enough, it’s back to Alessandro for the final word, a message for the fans:

“After many years in the mobile videogame industry and after developing so many different types of games for casual play we found our way to the console market thanks to Hyperlight EX, probably our best and more hardcore game ever. We encourage you to try the game and discover its original twist and fresh gameplay, simple to understand but very hard to master. As long time gamers (we started play games with the NES and Arcades!) we love these type of console games and we will continue to push forward by doing our best to create great games for the current and next generation of consoles!”