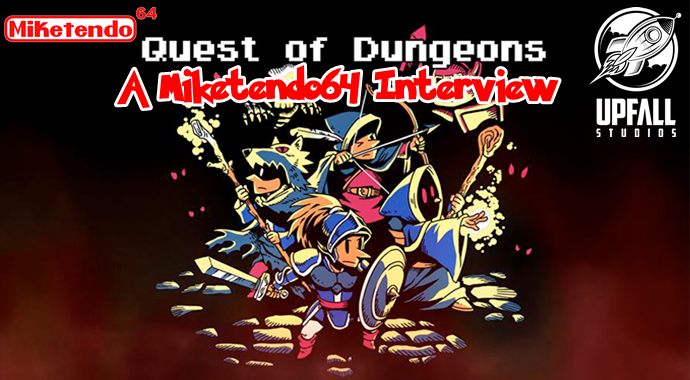 Quest Of Dungeons: A Miketendo64 Interview With Upfall Studios

If you own a Wii U or a 3DS and are a fan of dungeon crawler games, then there is a very good chance you might have heard of a game called Quest of Dungeons and if you haven’t, then you might want to listen up.

Not only is the game out not for Wii U and 3DS, but it supports cross-buy, so if you buy the game for one device, you can download it on the other, provided both use the same Nintendo Network ID account. More importantly though, Quest of Dungeons is game developed and published by Upfall Studios, a company in which consists of just one man. That man is David Amador and yes he may have had some outside help, but the majority of the work involved was done by David and I recently had the opportunity to interview him:

3DS Does it Best:

Miketendo64: “Quest of Dungeons is now playable on a range of platforms, but in your personal opinion, which format offers the best experience and why?”

David Amador: “That is always a difficult question for me to answer because I made them all, so I have a special bond with each one and I always tried to make them on par with the previous. But if I had to pick one version to be my favourite now it’s probably the 3DS version because of the combo of portability and physical buttons,”

Quest of Dungeons is Coming to PlayStation 4 (But as for the NX, that’s a different Story):

David Amador: “I’ve been considering all requests and seeing what is possible, so right now there are plans for a PS4 version. It is nearly finished. In fact I should have some news on this soon. However I have no news for a Vita version at the moment. As for a Nintendo NX release, it would be nice, but I’ll have to wait and see what it [the NX] is before deciding if the game is a good fit for it.”

Quest of Dungeons was Never Originally Intended for Nintendo Platforms:

Miketendo64: “Quest of Dungeons comes across as a game that should have always been on a Nintendo platform. Was that your original intention or just something that happened??”

David Amador: “I’ve always been a Nintendo fan and the game is influenced by some of the Nintendo games I’ve played, but the original intention was not for a Nintendo release. I didn’t imagine that I would have a chance of Nintendo accepting me as a developer, but it was only after releasing the PC version and seeing the reaction of players that I started getting questions about other platforms, so I decided to approach Nintendo.”

Quest of Dungeons 3DS StreetPass Ghosts was Considered for the Wii U Version of the Game:

Miketendo64: “Unlike with the Wii U version, players of the 3DS games can actually use StreetPass and encounter the ghosts of other players in Quest of Dungeons and can loo/kill them? Was it ever considered to try and include this feature with the Wii U game or was it solely conceived as a 3DS exclusive?”

David Amador: “The whole idea came from trying to use the StreetPass feature in some form on the 3DS version, I always liked that in other games, so when I came up with the idea, I decided to implement it. I did think about bringing it to the Wii U version as well, but it didn’t make much sense because you have the console in your house. The fact that players walk with the 3DS and get a StreetPass from an unknown person that happens to be playing the game created this really neat unique thing that I decided to keep just for that version.”

Porting to 3DS Proved Trickier than Porting Quest of Dungeons to the Wii U:

Miketendo64: “Porting to 3DS and Wii U is not without some issues, what difficulties did you face when attempting to bring the game over to Nintendo’s current platforms?”

David Amador: “The Wii U version was more or less the same difficulty that I got from other platforms, so while it has its own difficulties, it wasn’t much more. The Nintendo 3DS however was trickier. First I wanted to target all 3DS versions, including the older models, and also to keep the same content, but with no image quality reduction so I had to do several optimizations to get it working close to the same speed as the Wii U.”

Miketendo64: “With permadeath and procedural dungeons, even with an easy difficulty on, Quest of Dungeons can be considered a challenging game. What made you choose to bring back the true gaming experience of hardships as opposed to the hand-holding experience most games give us today?”

David Amador: “Because I personally dislike that [hand-holding] when playing games. Part of the whole experience is the exploration, and discovering, I remember playing some games and discovering a new move after a couple days, it’s an amazing feel to discover something on your own. I know games these days have more complicated gameplay and mechanics and that has to be thought out, but it should be done in a gameplay form, not tutorials or hints on a screen. As for being challenging that’s because I like it, it took me months to beat Battletoads, but it felt great when I did it and that’s the kind of thing I like to play.”

Miketendo64: “I get what you mean. Sometimes you want to play a game that actually challenges you. Guess that’s why I’ve always liked the Water Temple from Ocarina of Time.”

Quest of Dungeons 3DS Theme Could Happen (If there are Enough Sales):

Miketendo64: “With more and more indie titles getting their own 3DS themes, is there any chance we could see Quest of Dungeons get the same treatment, or has that ship now passed?”

David Amador: “It’s not unlikely, but it will really depend on how well the game sells or not on eShop.”

Miketendo64: “I get what you mean. Sometimes you want to play a game that actually challenges you. Guess that’s why I’ve always liked the Water Temple from Ocarina of Time.”

The 4 Classes of Quest of Dungeons:

Miketendo64: “Four classes (Warrior, Wizard, Assassin & Shaman) that offer a whole range of ways to play, just which class have you found to be the easiest and which one is your favourite to play as?”

David Amador: “The Assassin is the easiest class to play, mostly because it’s a ranged class. My favourite one is the Shaman, mostly because it’s the one I customized the most, warrior and the others all come from standard rules that we are using to on other games, like Warrior is stronger, Wizard is magical and etc.”

Miketendo64: “Quest of Dungeons comes across as being an inspiration/retelling of Dungeons and Dragons but in classic videogame form. What made you choose this type of gameplay for a videogame?”

David Amador: “I started playing roguelike-type of games and was immediately impressed with the things that you could do, randomized gameplay, permadeath, RPG elements, that’s usually where my ideas come from. I got a feeling that I want to try it for myself and do something with my own personal touch or ideas, so I try and see if it ends up being good or not.”

Miketendo64: “There is no doubt you have put a lot of work into Quest of Dungeons, but as the creator to such a title, are you pleased with what it is now or are there still moments where you say to yourself you should have done more, such as another mode or something you should have done differently?”

David Amador: “Being honest, yes. There are tons of ideas that were left out because of several reasons. Each time I port it I find something new that I’m not pleased with and I fix it. There is always something that I feel I wanted to have more time or could have done differently, I think that’s a feeling no developer can ever shake.”

Miketendo64: “Seeing as how you’re actually something of a one man band, just how much of Quest of Dungeons did you do yourself?”

David Amador: “I did 100% of the code. All sounds effects. Almost all the UI (except for 3DS version) and some assets. All characters/tiles and pixel art was done by someone else and I just did some extra things that were necessary.”

Miketendo64: “Let’s do a little roleplay. You’re you and I’m someone who has never played/heard anything about Quest of Dungeons. What exactly is Quest of Dungeons and on the scale of awesomeness, where does it come?”

David Amador: “Quest of Dungeons is a roguelike, a sort of dungeon crawler game where you have to traverse dungeons and fight monsters, but each time you die, you have to start all over, also each time everything is different and in a different place. It’s a fast paced turn-based game so it is a good fit for both real time players and turn-based ones. I always feel awkward rating my own game, but let’s call it an ‘Oh yeah!’”

Miketendo64: “Quest of Dungeons has a very similar art and feel to Yacht Club Games’ Shovel Knight. Could you ever see yourself working with them on a future title and would you if the opportunity came your way?”

David Amador: “Yes, I think that similarity comes from both of us (and I hope I’m not wrong here) trying to bring that old school feeling to games of today. If that chance would come up and it made sense to both of us, then absolutely yes I would love to work with them.”

David Amador: “Ahh, I’m torn between Diablo 2 and Dungeon Siege 2. Both are great games, which I still play today and hold up, but comparing Quest of Dungeons to those 2 feels a little unfair. But I guess you could say it is a “training-wheel” version in pixel art?”

Miketendo64: “If you could pass on some advice to an aspiring developer who wishes to follow a similar career path as you, what would that advice be?”

Talking to David, I can honestly say I did learn a few interesting things regarding Quest of Dungeons, and for that I am grateful for Quest of Dungeons is an interesting game and certainly one of the better indie titles currently available on the Wii U eShop, so thank you David for taking the time to answer our questions. And we’d also like to thank Adrian Vega of Ratalaika Games for first putting us on to Upfall Studios in the first place and because I’ve said enough, here’s David once more with a message for his fans:

“I just want to thank in advance anyone who decides to check out Quest of Dungeons, and for those who do get it I hope you like it. Feel free to keep an eye out for my games in the future of course, and happy gaming!”


Categorised in: 3DS, an interview with, Interview