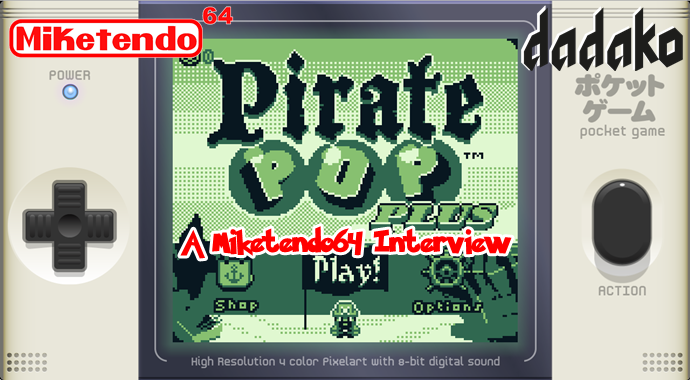 Pirate Pop Plus: A Miketendo64 Interview With Dadako

With Pirate Pop Plus due to release on Wii U and 3DS next week, an exciting gaming experience will soon be hours, but just because the brilliant guys over at 13AM Games are publishing Pirate Pop Plus, they didn’t develop it and even now not everyone knows that. The true masterminds behind Pirate Pop Plus are Dadako Studios and so since we’ve already spoken to Dave Proctor regarding the upcoming release, we fancied talking to the Dadako guys as well to get their story.

I must warn you though, our interview is full of Pirate Talk as we also talked about Pixel Pirate with Hawken King and favourite Pirates, so brace yourself for a whole lot of rum drinking, mutinies, walking the plank, “arring” and a couple of questions getting answered. Actually only the latter can be found below, but we’ll throw an “arr” in there somewhere:

Hawken King: “I grew up with 8-bit and learned to art on the Amiga 500, using Deluxe Paint. Back then, it wasn’t particularly a style rather, it was all that was possible! I’ve never really given up pixel art and 8-bit offers me restrictions that suit my art style (and possibly mentality.)”

The Formula in which Concocted Pirate Pop Plus:

Miketendo64: “Pirates, Gravity, Customisable pocket game, treasure and did we mention pirates?” What inspired you to create a game such as Pirate Pop Plus?”

Hawken King: “Small screen factor was a big draw and the gravity switching mechanic has been on my mind for a while. The two mixed well, throw in some pirates and arr presto.”

Hawken King: “Having gravity flip around 4 poles like that, required a lot of extra coding and pre-emptive planning. One of the most rewarding aspects of the game’s production was getting to work with 4 different musicians. I requested that the music be able to run on an actual 8-bit system like the NES, so we made all the music in Famitracker. It’s really amazing what these guys did, and a bonus is that I can load this up on a real cartridge and play the music on an actual NES! (The soundtrack will be available separately for all you audiophiles.)”

Miketendo64: “Pirate Pop Plus casts Pete Jr. in the main role. What made you decide on that particular character, as opposed to any other character you could have easily created to fill the role?”

Hawken King: “For the prototype of Pirate Pop Plus, I needed a small character for single screen gameplay, something that could be easily identified. Pete Jr. appeared in my scribbles and leapt off the page!”

Miketendo64: “Pirate Pop Plus introduces us to Pete Jr. is a loveable, but sleepy pirate. Can we expect to see him make another appearance, be it as a cameo, or a full blow appearance in a spin-off/sequel, any time soon?”

Miketendo64: “When initially developing Pirate Pop Plus, how much time would you say you played the game during development and on what platform do you intend to play it on as soon as it releases?”

Hawken King: “The game engine allows for simple in-editor prototyping. I could write some new code then check out the changes immediately. This made for quick turn around on the iteration process. I’d say it would be hard to really gauge the time spent playing during development as I was playing it all the time, but the entire game took about 6 months to build from start to finish.

Both platforms offer the same great experience, on Wii U you can pass around the controller for scoreboard battles (believe me, it gets highly competitive with pals around the sofa doing “just one more go”) and really pump out the chiptunes at a good volume. The 3DS version offers a more personalised experience that is great for putting in short bursts of intense gaming. 13AM (the publisher) tell me they would find staff hiding away with the 3DS dev kits squeezing in quick sessions to better their scores on lunch breaks, not on the clock! Big shout out to those guys.”

Dadako’s Next Game will be a Big one! (Talking Pixel Pirate):

Miketendo64: “Pixel Pirate sounds like it’s going to be quite a big game, but with still so little known about it, just what kind of things can we hope to get up to and just what is the story to Pixel Pirate?”

Hawken King: “Initially I was developing the game out in the open, but after some thought I decided to make all development on the game behind closed doors to keep the story fun for the player, “when it’s ready, it’s ready” kind of thing.

The game is an Action RPG, where going around and talking to people is just as important as taking down bosses. The dialogue is a bit “tongue in cheek” – think Mario Bros meets Monkey Island and you’re halfway there. Early playtesting has raised a few laughs (hopefully at the jokes!) So I’m confident it’ll be a blast to play. The plan is to bombard social media with platform details and teaser shots again when it’s nearly done, expect more then!”

Miketendo64: “We most certainly will.”

Hawken King: “Most of the technical aspects will be ironed out by the end of this year. Release will probably be more structured than my guesses; games take a crazy amount of time to make but they also take time to pass testing, plan launch window etc. The game will definitely be released in 2017. We developers are always over-optimistic at predicting release dates!”

Hawken on Pixel Pirate and Pirate Pop Plus Main Difference:

Miketendo64: “When did development on Pixel Pirate begin and how have you found the development process compared to that of Pirate Pop Plus.”

Hawken King: “Pixel Pirate™ in Bits of Eight” started development in early 2015. The process is a lot more complex than Pirate Pop Plus, mainly because it’s a much larger game with tons of dialogue but also because I wanted to put many unique visual and mechanic skeletons to rest with this one. Expect a polished and well crafted single player experience that will have you “hooked” from the start (groan.)”

Pete and Pete Jr. are No Close Relation:

Miketendo64: “Pixel Pirate casts Pete as its lead role. Does he have any relation at all to Pete Jr. from Pirate Pop Plus?”

The Future is more P’s!:

Miketendo64: “After Pixel Pirate, do you have another game or project in mind?”

Hawken King: “Yep. I imagine a lot of time will go on support for all the P’s: PPP & PP, so it might be a while yet. But there are no shortage of game plans here.” *Throws bundle of secret game spec papers in the air*

Miketendo64: “Final and the most important question of the day, do you have a favourite pirate? Who is it and why?”

Hawken King: “Yep. Would have to be Anne Bonny & Mary Read collectively. *Puts on serious history hat* They both posed as male pirates, fought like male pirates and pretty much passed as pirates for many years of the golden age of piracy. Like the Bonnie and Clyde of the pirate age, it all came to a grisly end as most pirate stories do. Oh and Pete Jr. of course!”

Thanks to Hawken, we learned a little more about Pirate Pop Plus and learn of a change of release date for Pixel Pirate. Sure it sucks hearing what will clearly be a great game, being delayed but the wait will be worth it. So cheers Hawken, for taking the time to give us the answers you did and because that’s enough from me, I’m going to pass the baton back to Hawken, who has a message for the fans:

“Pixel Pirate and Pirate Pop Plus are all about games that you can instantly boot up. No patches, no internet needed (well, only to get the game), that old school feel of just plugging in and chilling out. No fuss. If you like that type of experience, then these games are for you.”


Categorised in: an interview with, Interview, Wii U