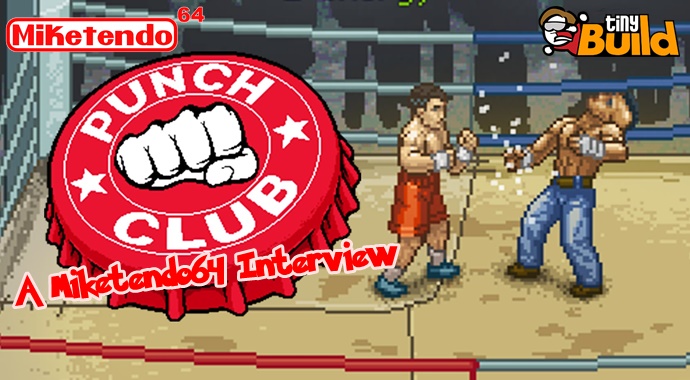 On the 1st of September, Nintendo dedicated a Nintendo Direct to games coming to their hand-held and among the games shown, one of them was Punch Club. The very same Punch Club that we’ve previously seen released before except now it’s coming to the 3DS and has been reimagined.

Lazy Bear Games may have developed it, but tinyBuild Games are those responsible for bringing the title to the 3DS and with it being previously announced that Punch Club will release this month, we of Miketendo64 reached out to the company to ask a couple of questions. In return, tinyBuild Games’ CEO, Alex Nichiporchik answered our questions and we have those answers right here:

An October Release is now Unlikely:

Miketendo64: “How is progress on the 3DS port going and is an October release still on the cards?”

Alex Nichiporchik: “We can’t say for sure, it will more likely be somewhere in Q4.”

A Retail Release Could Happen, but only if it Sells Well:

Miketendo64: “Is there any chance of a retail release, or will Punch Club remain solely a digital title?”

Alex Nichiporchik: “I really want to do retail at some point. If Punch Club sells really well on 3Ds, that’s something we’d love to consider.”

Miketendo64: “Just how far does your involvement with Punch Club go?”

Alex Nichiporchik: “With Punch Club we’re involved as a partner. So where we need to, we help out on production level, otherwise do marketing. I was the producer from tinyBuild’s side, and the 3DS port is being handled by us.”

Miketendo64: “So many indie 3DS titles are getting their own 3DS themes. Can we hope to see a Punch Club 3DS theme in the future?”

Alex Nichiporchik: “With Punch Club we’re involved as a partner. So where we need to, we help out on production level, otherwise do marketing. I was the producer from tinyBuild’s side, and the 3DS port is being handled by us.”

Miketendo64: “How does the 3DS version of Punch Club compare to the previous versions of the game we’ve seen released already?”

Why there Aren’t More tinuBuild Games Released on Nintendo Consoles:

Miketendo64: “You have released a lot of games and almost all of them not on a Nintendo platform. Any particular reason for this?”

Alex Nichiporchik: “The main reason is that we’re a small team, and our porting house is just a few people — so we need to weigh in on every project and if it makes sense. I’m personally excited about the 3DS as I constantly see people playing on them at shows like PAX and Gamescom.”

The Issue of 2 Screens:

Miketendo64: “Punch Club is your first game for the 3DS, what has been the hardest part of porting it to Nintendo’s current hand-held?”

Alex Nichiporchik: “The most difficult part is figuring out how to make a single-screen game make sense on two screens when one is a touch-screen. It’s a totally different experience so we had to reimagine all of the user interfaces to fit that.”

Hands on With Punch Club:

Miketendo64: “Having played the game yourself during development, how do you find the game and how many hours would you say you’ve spent playing it?”

Alex Nichiporchik: “Outside of normal testing I’ve beaten the game 5 different times, trying out different abilities. We usually have procedures in place to get you to certain points in the game, and the game’s designers have really good QA methods with crazy excel sheets that help balancing.”

Miketendo64: “Let’s do a little roleplay. You’re you and I’m someone who has never played/heard anything about Punch Club. How would you describe it to me to make me want to go out and play it?”

Alex Nichiporchik: “Manage the life of an MMA fighter in a retro-boxing-tycoon sim. Figure out who brutally murdered your father, train hard, and punch crocodiles in the face. What’s there not to like?”

Miketendo64: “Well when you say it like that, it sounds awesome!”

Miketendo64: “Is there anything about Punch Club that gamers don’t know, but you feel they should?”

Alex Nichiporchik: “That it’s always useful to specialize in one of the three main traits — strength, stamina, or agility. Trying to do all of them causes stat decay, and can lock you in a loop.  Become good at one thing and follow your heart!”

Miketendo64: “Non-related, is there any chance we could see Pinokl Games’ Party Hard titles to gaming platforms other than mobile, with you as the publisher?”

Alex Nichiporchik: “Thing with Party Hard is that it’s not something a platform would want to parade around. The subject of the game is very serious, especially considering the current situation in Europe and the constant shootings in the US. We’re being cautious about Party Hard as an IP and whether it makes sense on Nintendo’s consoles.”

Miketendo64: “You make a good point.”

Thanks to Alex, we learned a little more about that game called Punch Club. Sure a few of us may be disappointed about the fact that we might not get to purchase it this month, but the game is on its way, even if it does come later than sooner. Big thanks goes out to both Alex and Yulia of tinyBuild Games and because that’s enough from me, I’m going to pass the baton back to Alex, who has a message for the tinyBuild Games fans:

“We are super grateful for all the support and love you have given us over the years. We have prepared a ton of surprises, including about a dozen unannounced games in 2017. Stay tuned!”