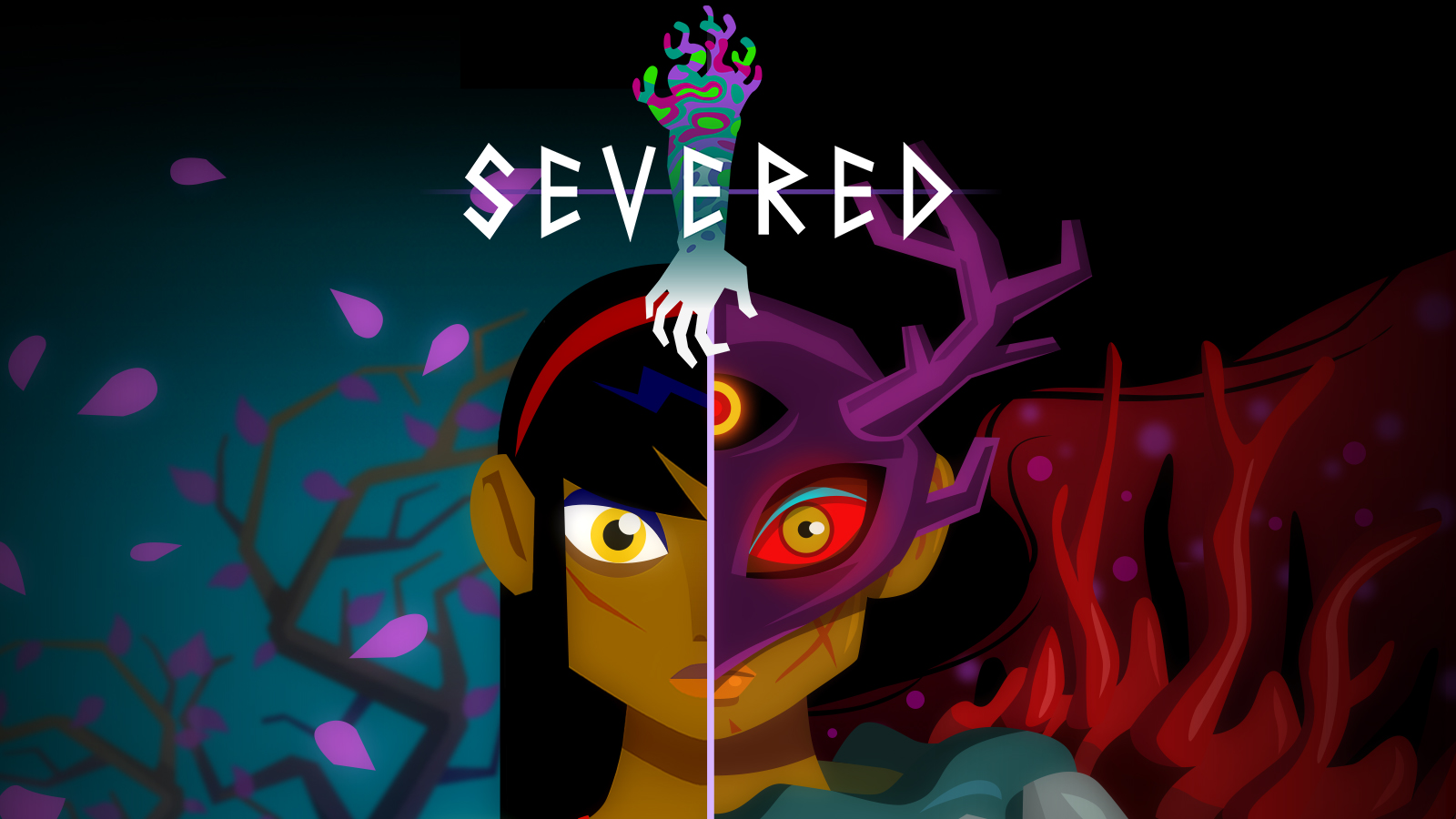 My name is Jack Longman and this is The Jacketendo Review, the two-in-one game review that caters to all kind of readers as it consists of both a fast and a short review and a slow and long one. Undergoing The Jacktendo Review today is the hack and slash adventure, Severed for the Wii U.

Severed in a Nutshell: (The Speedy Review)

Developed by Drinkbox Studios, and initially released on the PlayStation Vita earlier this year, Severed is the action-adventure, which sees protagonist Sasha wake up in a mysterious world and her family is nowhere to be found. With a mysterious presence in the place that looks like her home, she encounters a mysterious stranger who is quick to tell Sasha this world is not her own, see her armed with a sword and sends her on her way.

As an action-adventure, it certainly lives up to its genre classification as there is much to explore and a whole lot of enemies you can perfect your amputation skills on, although you best get used to seeing the same lot of enemies over and over, as there isn’t that much of a variety on that front and that’s with them supporting a different look, depending on how far you are into the game. So while that is a negative point for this game that is heavily focused on utilising the touchscreen, how about some positives and then a few more negatives?

The art style is interesting and captures the essence and feel the story clearly wants to convey. The skills tree and in-game achievement system are among the game’s best features, but the combat does feel limited at time. It’s almost as if the developers could have done something more with it if they had more time, and what’s worse this certainly feels like a game that will leave gamers divided. Not everyone will like it and not everyone will “get into it,” but there is a particular crowd that will find themselves mesmerised by it, but sadly I’m not among them. No matter how hard I tried, I just couldn’t like this game as much as I wanted to.

Severed in Full: (The Lengthy Review)

Developed by the Toronto based independent videogame development studio Drinkbox Studios, Severed is their newest title and after already having released on the PlayStation Vita back in April, this September Sasha’s story is coming to the Wii U. But just what exactly is the story? Well Sasha is a one armed girl (one and a half if you want to get technical,) who has been taught how to wield a sword by her mother. The game begins with her waking up in this strange word of vivid colours and an eerie sense of foreboding darkness. Looking around, her family is nowhere to be seen, but a trip to her family home will soon send all she knows spiralling out of the window. Confronted by a strange being, he arms her with a living sword and gives her a mission, to recover her family and see them brought back to their abode.

Now I know this is something I do say a lot, but story is very important to me and is to me is the biggest aspect of any videogame and Severed’s story just didn’t do that much for me. I’m not saying it’s an overused plot, it’s a good plot and a plot that sells games and the progression is nicely done, but most of the time I just couldn’t get into it because of the repetitive combat. By the time you come out of one battle and into another and then another and then have a bit of story progression, one press of a button too soon and you can miss something crucial, so for me personally, the story ended up being nowhere near as good as it could have been because I just couldn’t get into it, but I do partly blame myself for that and not solely blame the developers for not doing more with the game.

As for the soundtrack for the game, I actually found it to be a bit hit and miss at times, sometimes it captured a scene perfectly, but more often than not, there were times the music either felt a little too much or not enough for what was going on. I do believe that’s one of the reasons I hated the combat system as much as I did and couldn’t be completely captivated by the story, because there were some instances where the music just didn’t deliver. Then again the game’s combat system wasn’t as great as it could be, but then that’s because the developers made it a little too easy. If you are someone who has played videogames and are used to touchscreen games, regardless of what mode you play, you will find Severed to be a lot easier than others would and it’s because you have that reaction time that comes from playing handhelds and using a stylus. Sure each monster’s attacks and attack times vary, but you only really need to face the same one twice, to know how to beat it easily and counter their every move before they can even land a blow. There’s also a little gauge on the bottom of the screen, which serves as an indicator as to when exactly they are going to attack, so it’s not like you have to keep switching between enemies constantly, but instead spend a little time on each one and then swap when you need too.

One good thing about the enemies you face, is there are other variants of them, which are tougher and harder to beat, but the second you get the ability to steal an enemy’s buff (or buffs if you’ve been upgrading your skills tree,) even the trickier later battles become something you can easily overcome, so if you are wanting to get this game and face a constant challenge through-out, here is what you will need to do. First make sure you have chosen to play the game on the harder setting, then as you progress, minimalize your skill tree progression, so that way you don’t become too overpowered too soon and enemies can give you a fright as they whittle away your life. But if you’re someone who wants to make the game as easy as possible, than in that case, engage in every battle that comes your way and do your best to fill your focus bar so that way when you have dealt ample damage to each enemy, you can then sever their limbs and wings from their body and put them to use by upgrading your skills, your life and more. The more you collect from the beginning, the easier the game gets, and the easier it makes the final battle, which in itself was actually a pleasure and certainly a highlight as far as the combat is concerned.

Combat aside and touchscreen controls, most of the gameplay is the exploration itself. The world is bright, bizarre and interesting, but we don’t actually get to learn all that much about it, no matter how much we try to explore it and even when we finally reach the thrilling conclusion, we’re still left with more questions than answers. As for navigating intriguing dimension, I found navigating it to be a bit of a nightmare. In fact instead of keeping my eyes on the GamePad, I was a little too preoccupied keeping my eyes glued to my TV screen, watching the displayed Map to ensure I was going in the right direction. But the puzzles were fun, and easy enough to figure out if you focus on them enough and exploring every portion of the map is important as there is a lot to collect. From pieces of heart to increase your life bar, to pieces of brain to extend your Mana bar, every piece counts for that final battle!

After spending under 7 hours on my first play through and 7 on my second one, I like to think I put enough time into this game to get a feel for it and earn as many of the achievements as I could (including the hidden ones,) but I can not deny the irrefutable truth that this game just isn’t my cup of tea. Severed is a game that applies to a certain type of a gamer and I am not it. I would however like to see another game set in the same world, preferably a Severed 2 and although I wouldn’t eagerly recommend it to anyone, Severed is a game that needs to be played at least once and that’s why I rate Severed for the Wii U, a 7 out of 10!

As for the 3DS version of the game, after having played through that a couple of times as well, since it’s European release, the 3DS version is practically the same experience and adventure the Wii U version has to offer, except instead of constantly looking away at a TV screen to watch the map, the upper screen of the 3DS possesses the map. Sadly though, I didn’t find the 3DS version to offer a smoother and more fluid gaming experience, so once again, Severed still comes in at 7/10, which means it doesn’t matter how you choose to play the game, the experience is consistent so feel free to play the game on the platform that suits you best.


Categorised in: 3DS, Reviews, Wii U