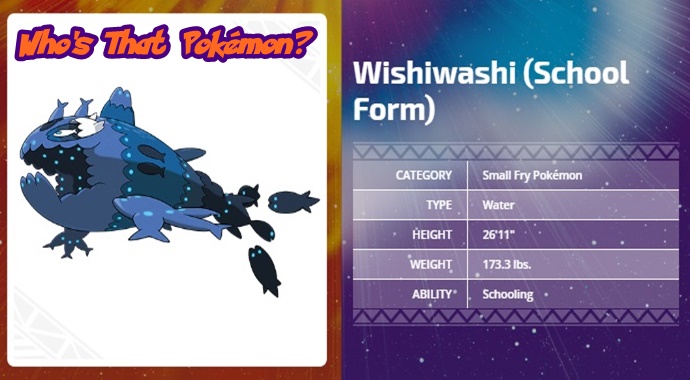 Welcome back to “Who’s That Pokémon?” the feature series regarding the Pokémon we can expect to see in the upcoming games. From Rowlet to Magearna, and Tapu Koko to Mudbray, we have covered them all, but now that even more Pokémon have been revealed this month, its time they got their own instalment of Who’s That Pokémon? So join us as we do another post all about Wishiwashi!

Description: “The seemingly weak Wishiwashi is called the demon of the sea because of its terrifying School Form! When Wishiwashi friends receive an SOS signal, they unite in this huge battle formation!

Wishiwashi that have encountered many dangerous situations and have a lot of experience calling on their allies will be able to emit a bright light from their eyes. They can gather allies and transform into an even more powerful Pokémon! Even Gyarados flee from Wishiwashi’s School Form!

Wishiwashi have a new Ability, Schooling, which no Pokémon has previously had. With Schooling, Wishiwashi can change form in battle to their School Form under certain conditions.”