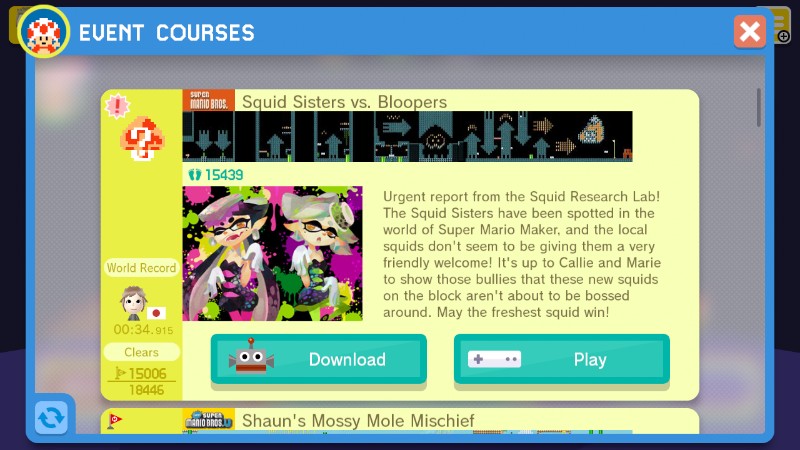 It’s a story that started in May, and Super Mario Maker hasn’t seen a new event course and costume added in over a month, but now it’s got two because Callie & Marie have arrived in the Mushroom Kingdom and they’re not going anywhere.

Now I may not be that much of a fan of the duo, but hey it’s new costumes, why wouldn’t I boot up the game and tackle the new course to get them? That said though, interestingly enough, there is actually a gap of two costumes between Callie and Shaun the Sheep, so unless the other new Splatoon amiibo help unlock different coloured versions of Inkling Boy and Inkling Girl, there is still two other new costumes that we don’t know anything about, yet. But you don’t want to hear about that, you want to hear about the course. Well in what is a fairly simple course that you will have to beat twice to unlock both costumes, Squid Sisters vs. Bloopers is an event course that will see you traverse land and water as you make your way across the Bloopers packed level, but it is in no way difficult whatsoever. To literally fail this level, you would have to stop paying attention and try to rush through it, but if you do take your time and pay attention, you could easily do it in under three and that’s playing through the level twice. But so that I don’t give anything more away about the actual course, here’s the course description and character trailer of the two, enjoy:

“Urgent report from the Squid Research Lab! The Squid Sisters have been spotted in the world of Super Mario Maker, and the local squids don’t seem to be giving them a very friendly welcome! It’s up to Callie and Marie to show these bullies that these new squids on the block aren’t about to be bossed around. May the freshest squid win!”

Less Super Mario Maker, but more Splatoon related, version 2.10.o is out now and as expected, it fixes the bug users were exploiting to make themselves invisible, which was discovered after 2.9.0 came out earlier this week. All good things have to end sometime right?