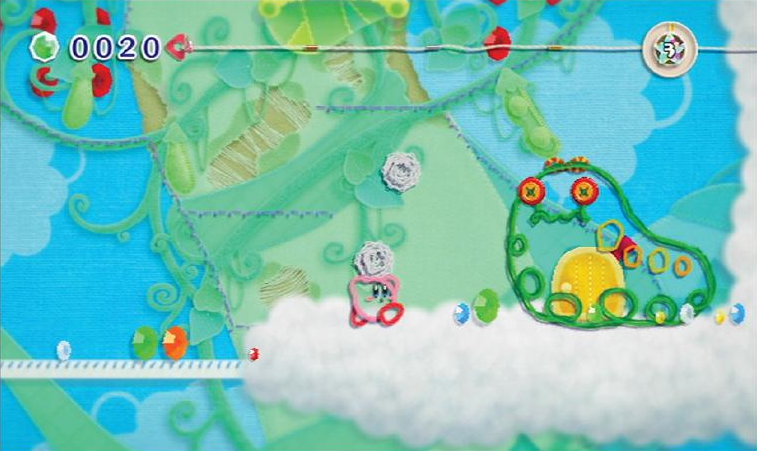 Nowadays, the only yarn-related game that comes to mind is Yoshi’s Woolly World, and for good reason. It is a shining example of a wonderful game with a beautiful art-style, and great controls. Today, however, we’re focusing on its forgotten cousin, Kirby’s Epic Yarn.

In Epic Yarn, Kirby is tasked with taking down the evil sorcerer, Yin-Yarn, who is turning everyone and everything in Dream Land into yarn. Before he is able to stop him, Kirby gets sucked into his magic sock, and is transported to Patch Land, where everything is made of yarn. Kirby then befriends Prince Fluff, who becomes playable to Player 2. The story is delightfully bizarre, and the writing is at times nearly laugh-out-loud funny. The narrating is done excellently, with the narrator delivering the lines sublimely.

Kirby’s Epic Yarn strays away from the regular Kirby formula, in that you are unable to suck in your foes and rob them of their abilities. Instead, you unravel them. There are also occasional sections where Yarn Kirby transforms into various things, including a dolphin and a snowboarding penguin. These transformations can completely switch up the game mechanically, even making it a side-scrolling shooter at times.

Despite the fact that Kirby’s main gameplay element is missing, you still feel like you’re playing a Kirby game, whether it be due to the familiar enemies, or remastered music tracks (we’ll touch on those later). In Epic Yarn, you are unable to truly die. Whether you take damage or fall in an endless pit, the worst thing that happens is you lose some beads. Beads are essentially the coins from the Mario series; they serve no true purpose, except the fact that getting a gold medal on a stage requires a certain amount of them. Furthermore, each stage has 3 treasures that can be used to decorate Kirby’s home in Patch Land where people will visit from time to time. This section of the game is ultimately forgettable, but serves as a fun distraction.

Kirby’s Epic Yarn is beautiful in every definition of the word; however, do note that I played it on the Wii U, through the Wii Menu. Everything on screen is as vibrant as most Nintendo games are, and the colours pop. The music is simply astounding. As I write this, I have a YouTube video playing the entire soundtrack, and I’m reminiscing on my adventure in Patch Land. The original music for each stage truly makes each one feel different from the next, even if they share a common theme. I truly cannot understate how much of a wonder this game is on all of your senses.

In conclusion, Kirby’s Epic Yarn is a true delight to play. Whether it’s been collecting dust in your game collection, or you happen to see it on sale for $10 at your local GameStop, I implore you to try this magnificent game. As I mentioned, due to its age, it shouldn’t be too hard to find it for a good price.

– Good for all ages