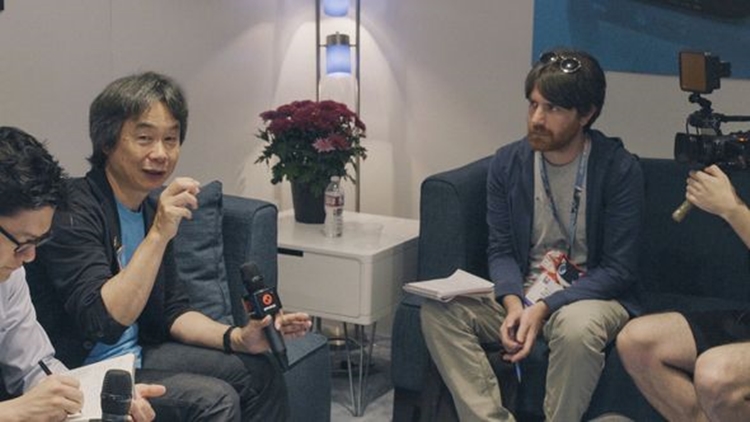 With so many interviews taking place during E3, a lot of information was shared and unless you are fluent in French, you may have missed the “gold” that came from an interview between Gamekult and Shigeru Miyamoto, along with Bill Trinen. But now that the interview has been translated, you can both questions and answers below:

Gamekult: “To begin with, I would like to talk about the filiation between Breath of the Wild and the original Zelda for the NES. Do you still play the original game from time to time to see how the series has evolved?”

Shigeru Miyamato: “The relationship between Breath of the Wild and The Legend of Zelda first comes from the reactions of people who have been able to test the game, we are not trying to recreate the first Zelda. At the time, the latter was created with the idea of freedom of action and a miniature garden in mind. When the series started to evolve, we went to make more and more games with only one path to follow, which pushed us to create larger and more complex dungeons, to imagine enigmas requiring specific items which ended up giving very sequential games. We then decided to go back to the roots of the series and we started developing the game we are showing today.”

Gamekult: “I was very surprised at first to see how important technology was in this new game, and then I thought about what you said in an interview a few years ago about the original concept of Zelda where Link traveled in time and where the Triforce was composed of electronic chips. Are you going to fully realize this vision thirty years later?

Shigeru Miyamoto: “To be honest, for the most part I let Mr. Aonuma take care of the project and I was very surprised to see a smartphone-like device in the game. (Laughs.) At first, I said to myself: “Can we really do that?” But effectively, since the first Zelda, we have thought about including technological elements and make Link a link between eras through a program. Now that programming has made huge progress and rendered graphics are more and more beautiful, we thought it would be appropriate for the expression of technological ideas.”

Gamekult: “Since the director of the game is Mr. Fujibayashi and he already took care of Skyward Sword, have you kept the fragmented design method of that game with a different team for each big region of the game?”

Shigeru Miyamoto: “To begin with, the core programming team is composed of new people and gathers the best internal elements of Nintendo. For the art team, we can find members who worked on past Zelda games and are working hard to offer a unique visual style for this game, using new shaders and other tools. We also make sure those beautiful graphics can technically fit in the demands of an open world with small visible loading times. We had to expand the programming and graphic design teams to reach our objectives, notably thanks to the help of people who collaborated on the Xenoblade series. In total, it represents more than a hundred of people on the project.”

Gamekult: “Are there any other first party studios involved in the development of this game?”

Bill Trinen: “There are members of other teams inside Nintendo who share their research with other internal studios and so there are representatives of other studios stepping in to help the group in charge of Zelda.”

Gamekult: “I noticed that the game had more numerical data than usual, but in contrast, the Rupees counter and money in general seems to have disappeared from the game. Is that the case and if yes, why?”

Shigeru Miyamoto: “As part of the reinvention of the Zelda conventions, we focused on the rupees’ case because we had a lot of feedback on the fact that you could pick up a lot, but there were not enough ways to spend them. As items to collect in such a free and open game, we thought they lost their benefits, even if they’re in the game in a different way involving combinations and other surprises in the final version.”

Gamekult: “How do you make sure that the stamina gauge when Link sprints or when weapons breaks don’t become such a heavy burden for players, to the point of breaking the pace and discouraging a lot of people?”

Shigeru Miyamoto: “It is true that it is a difficult balance to find, especially in a world we explore over long horizontal distances but also vertically. We really want to show in a concrete way that the character can travel as he pleases and is improving over time in this game. With a character where sprinting is unlimited, we probably would have shrunk the map. Today, we have faster ways to travel like horses, teleportation points or the paraglider which can be used in a complementary way to make exploration more varied. Link’s capacity to sprint and climb serves as a measure to determine everything else.”

Bill Trinen: “There are also ways to recharge your stamina faster by combining or cooking items. You could find ways to increase your maximum stamina temporarily or permanently. Keep in mind that the playable demo at E3 only represents a small portion of the game and does not allow to ride a horse or to use the paraglider, two options that completely changes the way to apprehend distances. When you get the occasion to glide over long distances and try the same path on foot, you’ll see how much that changes everything.”

Gamekult: “What is your level of involvement in such an important project for Nintendo?”

Shigeru Miyamoto: “In the past, I was heavily invested in Zelda, whether for establishing the basis or to adjust small details on the way. With the help of my colleagues, I could deliver a key game in hand and then let the team take care of the closure. Today, considering the size of the game in the works, there are a lot of different teams in charge of the production, including one responsible for the physics engine’s integration, for example. So, I have especially been doing small tests on the way Link controls and reacts to the player’s orders, but I leave the developers take care of the rest after validating a checklist. As we are approaching the end of the development, I think I will be more involved to polish the game as much as possible.”

Gamekult: “Mr. Aonuma has recently explained in an interview that it would theoretically possible to quickly reach the end of the game after the beginning, even if he considers that it would be a bit silly to experience the game that way from the start. Does this imply the presence of incentives to replay the game multiple times, a second quest or multiple endings?”

Shigeru Miyamoto: “Honestly, I don’t know! (Laughs.) That said, from the perspective of a very open game with lots of different things to master, we keep a main plot and a defined final boss to defeat. Rather than focus on a complicated approach based on multiple endings, I think we should above all leave players choose their own ways to explore the game.”

Bill Trinen: “Mr. Aonuma especially wanted to say that it is possible to face this kind of challenge – and I know it because I have tried it myself, but I was very scared and I took the way out very fast! (Laughs.) So you can try to do it, but it won’t be easy at all.

Gamekult: “Is it possible to finish the whole game only wearing boxers from the beginning?”

Gamekult: “We regularly talk about the possibility to include a female character in a Zelda game for several years. Considering her important role in the story and the name of the series, can we expect to see in the future a game with Zelda as the main protagonist? If Tingle managed to have two games in his glory on DS, surely it is possible to do something, right?

Shigeru Miyamoto: “We clearly talked with the team to make a game centered about Sheik, so I cannot say it is impossible to see something of the sort in the future, but in the classic games in the series, Link is the hero and that will not change. For the rest, you have to be patient and see what happens!”