A Mew for You (A Miketendo64 Giveaway) 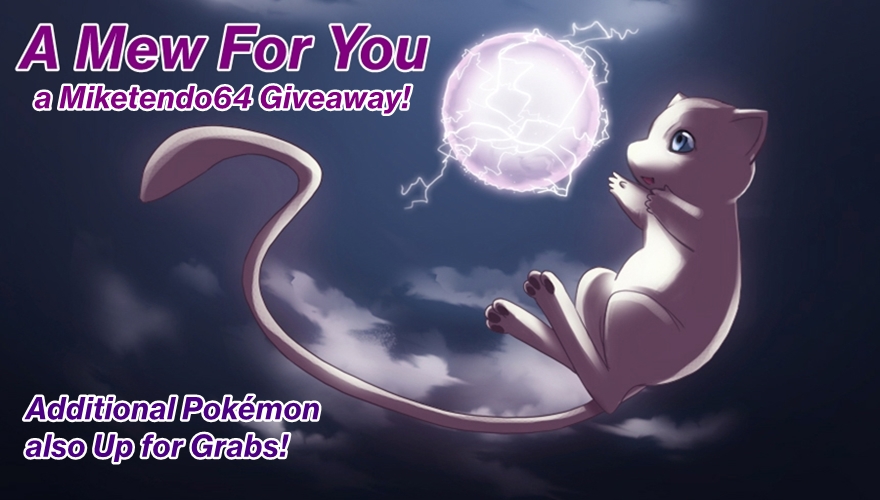 Love Pokémon and want to get your hands on a free Mew? Then listen up because this might just be the giveaway for you!

It is the 20th anniversary of Pokémon and mythical Pokémon are being distributed monthly. Starting the distribution was of course Mew back in February and recently Mew has come back on to the scene thanks to a second chance to grab the Pokémon. In Europe and Australia, you simply need to enter the code MEW2016, but if you’re in North America and signed up to the Pokémon Trainer Club Newsletter, then this month you’ll have received an email containing a code for you to get Mew.

Sadly though, not everyone is signed up to the newsletter and many have missed their chance to grab Mew, but thanks to Gamer2006, we have a NA code so one of you out there can claim this Mew for yourself, (one of two we have up for grabs,) so with that in mind, let’s make this a very simple giveaway. (You will need to have a Pokémon ORAS or X&Y title for your 3DS):

To enter you must simply COMMENT on the bottom of this post. But that comment has to pertain to Pokémon Sun & Moon. (Can be about anything, but it has to do with the new games.)

The Mew code is for North America and EXPIRES August 31st 2016.

We do have a SECOND Mew, which can be TRADED to your or be DEPOSITED in the GTS, so if you are not in North America, you can still enter, just specify in your entry comment.

Anyone who shares this Giveaway and subscribes to our site, our Facebook page or even our Twitter is eligible to receive a random starter. You can find our links below:

To cement your chances, after liking, subscribing, tweeting, be sure to send us a comment or tweet saying the following phrase:

Unlike the Mew giveaway, we will not be announcing those who are to receive one of our many starters. Instead we will simple get in touch with you, by responding to the message phrase you sent to us.

Be advised though that NOT everyone who subscribes/likes/follows will receive a starter.

We would just like to take the moment to thank Gamer2006 for his gift and wish you all the best of luck. Let the giveaway event commence!

One thought on “A Mew for You (A Miketendo64 Giveaway)”