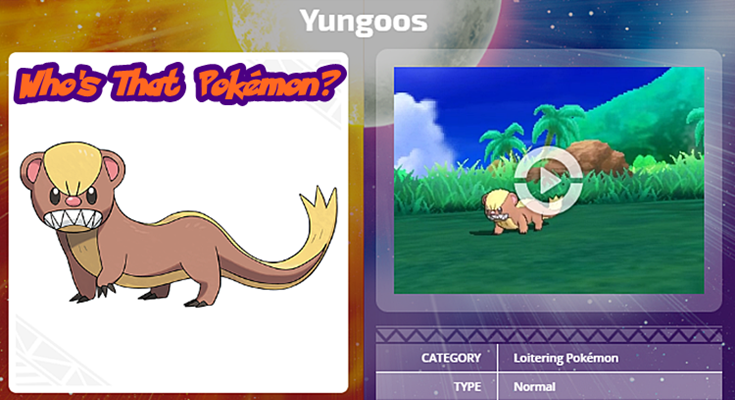 While we still wait on more details concerning Iwanko & Nekkoala, E3 is here and we’ve just had three new Pokémon revealed and more details on Magearna, so it’s time for the second of 4 new “Who’s That Pokémon?” posts. Up now, it’s Yungoos!

During the Nintendo Treehouse Live at E3 stream, the trainer encounters a Yungoos in Route 1 of the Alola Region.

Description: “Yungoos is a big eater that is never satisfied. The majority of its long body is given over to its stomach, and its digestion is swift, so it’s always hungry. It has strong fangs, so it can crush and consume the hardest of objects. Each Yungoos chooses its own particular route for searching out prey. It stalks along this route searching for food until it’s exhausted, at which point it drops and sleeps wherever it may be. It’s thought that these Pokémon decide their routes based on safety, so that there’s no risk in falling asleep at any time. Yungoos is not a Pokémon that is native to the Alola region. It was brought to the region to help deal with the explosive population of a certain other Pokémon, and now Yungoos are commonly seen around the Alola region.”

As soon as any additional information is divulged, we will be sure to update our information. We do however know Yungoos will evolve once. Now like we said, this is the second of 4 new posts, so as we finish here, it’s time for the next one.