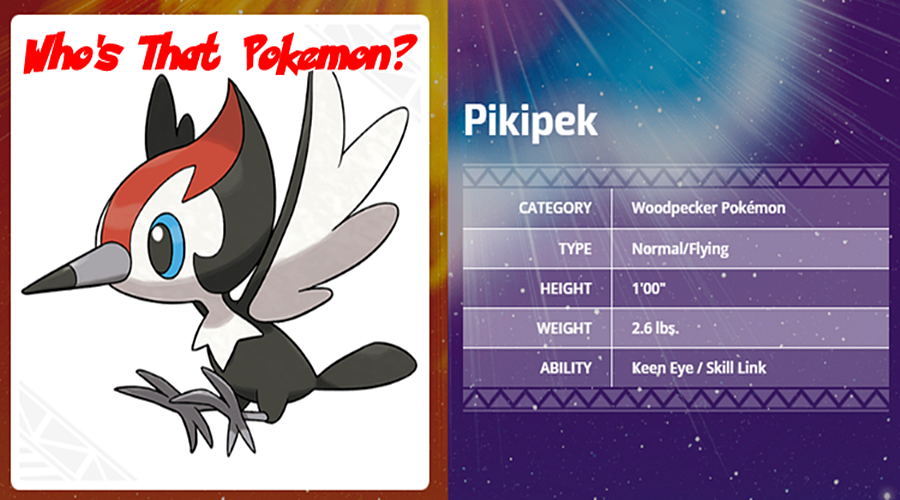 While we still wait on more details concerning Iwanko & Nekkoala, E3 is here and we’ve just had three new Pokémon revealed and more details on Magearna, so it’s time for the first of 4 new “Who’s That Pokémon?” posts. First up, it’s Pikipek!

Specific routes have yet to be announced, but somewhere in in the Alola Region.

Description: “Pikipek can strike 16 times a second with its beak. These strikes are powerful enough to not only drill through hard wood but even shatter stone. The noises made by their blows can signal others. Some of these signals have been identified as warning signals and greetings among allies. Pikipek Trainers have grown to recognize them as well. These Pokémon drill holes in trees and store food in the holes. They also like small, glittering objects and will tuck them away in their food stores, too. It’s often said, “Something lost, something missed, check inside the Pikipek nest.” Pikipek will attack distant opponents by zipping seeds at them. These shots have enough strength to embed the seeds in tree trunks.”

As soon as any additional information is divulged, we will be sure to update our information. We do however know Pikipek will evolve twice and that Pikipek is no #10 in the Alola Pokédex. Now like we said, this is the first of 4 new posts, so as we finish here, it’s time for the next one.