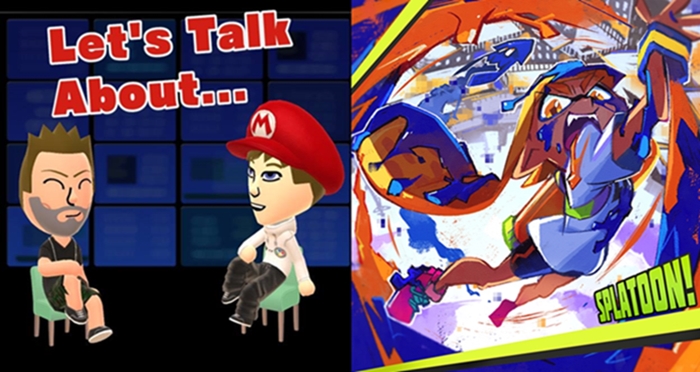 Hello and welcome to the 6th edition of Let’s Talk About, a series of discussion posts and videos dedicated to all things Nintendo! Be it a singular game, a series in general, consoles or even just Nintendo’s latest actions. In today’s piece we are heading into the colourful inky world of Splatoon, a game which is now celebrating its 1st anniversary!

So Splatoon is now 1 years old, are Nintendo doing anything special to mark the occasion? Well they’re releasing a special Wii U Splatoon bundle. Sure the console itself will be the standard Japanese white 32GB version and not an inked up Special Edition Splatoon version, it still comes with Splatoon pre-installed and both Callie & Marie amiibo so that’s something. (Note the bundle is solely for Japan and releases on the 7th of July.) Still who would have thought that when this game released last year that it would do so in spectacular fashion and become a crowd favourite? I certainly didn’t and even now its popularity climbs. Except it’s not just the game that’s popular is it? It’s characters from the game, the Squid Sisters to be precise, who have gone from being two aspiring popstar characters, who in-game would keep you updated on all the latest news and Splatfest events, to full blown pop stars, who have not only given 2 “live” performances, but now they have a CD releasing too. A CD (Splatoon Live in Makuhari,) which features two new tracks, and is due for release in Japan, on the 13th of July. (Just a handful of days after the new Splatoon dioramas and amiibos are released.)

Still not all of Splatoon’s success is down to Callie & Marie, a lot of it is down to the game itself. There is a reason why bright coloured shooter has won so many awards and that’s because of its originality. Why crawl through muddy water and trek through a swap in an attempt to find rival soldiers, when you can very easily turn into a squid and slide to the other side of the skate park and ink all those who oppose you? That’s the difference between the likes of Call of Duty and Splatoon, essentially, right at the core, they are the same game, just interpreted and developed differently. As stunning as the graphics are of a Call of Duty title is, the multiplayer aspect of each title isn’t all that different. It’s just a case of doing the same thing over and over, but with the graphics becoming more lifelike over time, whereas Splatoon makes you do those things you’ve already done in a shooter time and time again, but it’s all down in a completely different way!

Then of course there’s the whole extra content that Splatoon continues to get, (even though it was all supposed to end in January.) As far as Splatoon goes, with the exception of purchasing amiibos for the game, all content has been free, even the next lot of free content, which is due out next month. (Sheldon’s Picks Vol 2 will be landing on the 7th of June for North America and on the 8th for Europe and Japan, most likely alongside update version 2.8.0.) I think we can all agree that when it comes to “dlc” no one has ever done it better than the way Nintendo did it for Splatoon. For both versions of Hyrule Warriors and Mario Kart, I found the pricing to be reasonable, whereas Smash and Fire Emblem Fates seem a little bit steep and yet Splatoon gets free content all the time. More weapons. More clothing. More stages and not one bit of it costing a single cent.

Constant content aside though, for me personally, Splatfest is the true bread and butter of this game, the very thing that keeps so many of us playing it day in and day out. Whenever one of those “slide into town,” excitement is in the air and it is time to be asked a fairly simple question and pick a side before that side will then battle it out to see who is number one! Splatfest is certainly something that makes this game worthwhile and enable us to forgive Splatoon for having such a short story mode (I forgive you Splatoon.) I may not have competed in every single one going, but the ones I did, I made the most out of it by playing it all day and all night, not wanting to miss a single one bit of the fun. Sure my team usually ended up losing and I probably didn’t do as much as I could have to help our cause, but when I try, I try and win or lose, Splatfest is always fun.

All that aside, there is one thing that I do find a little odd and that’s the fact that Splatoon has only just now become 1 years old and yet for the last four months, there’s been a lot of chatter on wanting a sequel already! Don’t get me wrong, I’m not saying Splatoon doesn’t deserve a second instalment, turning a game into a series, but as long as new content keeps coming and we’re all madly obsessed with the Splatoon we’ve got already, I fail to see why we even need a Splatoon 2 so soon. A port for the NX however makes perfect sense. Not everyone ones a Wii U, which means aside from the millions of gamers who have got the game already, there’s not many more of them out there left to buy the game, but with the new Nintendo console releasing next year, an NX version Splatoon can go on to acquire another couple of million sales. Sure there is a port in development, but even Nintendo are unsure if they will be able to pull it off in time to have Splatoon NX as a launch title for the NX. (It would be sweet if they did.)

And now, considering as how one year has passed, I feel like writing a bunch of Splatoon facts purely because I can, so here’s 1 year of Splatoon in review: (Note the stats below are subject to change, especially next month when Sheldon’s Picks Vol.2 comes out)

Boasts its own amiibo series

1 game associated website for checking out you in-game stats

Given the new content, amiibos, CD and even the clothing merchandise Splatoon has on the way, Nintendo are certainly making the most out of this celebration (more than they did for Zelda’s 30th and sure they may be dedicating their time at E3 to the next Zelda game and hosting an event at Nintendo NY, but it’s taken them a long time to start celebrating the occasion, whereas #Pokemon20 pretty much lasted the entire month of February.) And considering the lengths Nintendo are going to as far as Splatoon is concerned, they are just getting warmed up. Give it 2 or 3 years and the Summer blockbuster will probably be Splatoon: The Movie and I would totally be okay with that!

And there we are, at the end of our Splatoon Edition of Let’s Talk About. We hope you enjoyed the issues we addressed and the talking points we covered. Should there be a game, a series, a character or anything else you would like us to discuss in a future piece, be sure to mention it in the comments because as far as Let’s Talk About goes, nothing is off limits.