Let’s Talk About: Miitomo (Where does it Go from Here?) 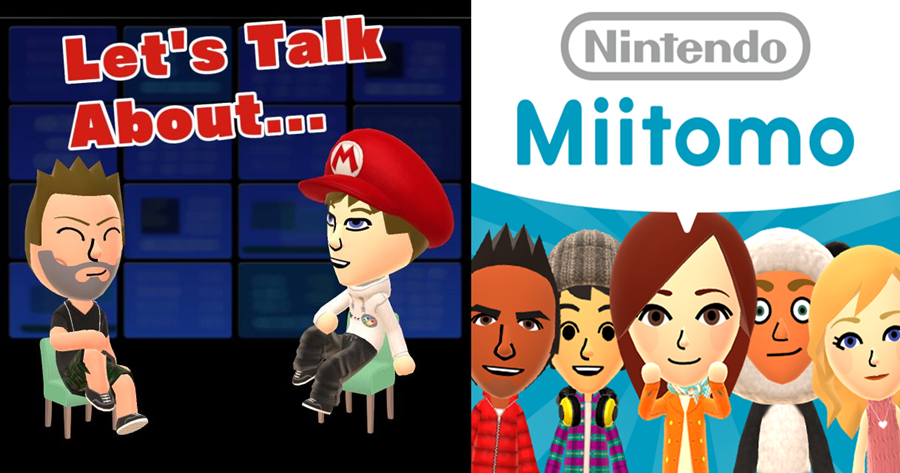 Hello and welcome to the 1st edition of Let’s Talk About, a new series of discussion posts dedicated to all things Nintendo related, be it a singular game, a series in general, consoles or even just Nintendo’s latest actions. In today’s piece we are heading on down into the world of Miis and Miitomo, discussion not just its present, but past and future as well.

For those have no idea at all what Miitomo is, Miitomo is a free to use social network app that was developed by Nintendo for Android and iOS devices. Although Nintendo wasn’t alone in this undertaking, because they are partnered with DeNA, (pronounced as DNA,) who are no strangers to Smartphones games. Nor is the only game/app we can expect to see from this partnership because Nintendo are dedicated to making their mark on the mobile market and have another four planned with DeNA, two of which we now know includes a Fire Emblem and Animal Crossing game.

Miitomo was first announced in October 25th and released first in Japan on March 17th and then “worldwide” on the 31st of March, 2016 along with My Nintendo, Nintendo’s following up to Club Nintendo and a means for monitoring our in-game achievements and award us for them. (As great as that sounds though, My Nintendo is a bit of a lie because the only actual in-game achievements that are being “monitored” pertains to missions you complete whilst playing Miitomo. Missions such as listening to your friends comments, answering questions, changing your cloths and more.)

Since its release, last week Nintendo revealed that Miitomo has in fact reached 10 million users worldwide, which for a free app, may not sound as impressive as it should be, but then you have to consider the fact that as well as being Nintendo’s first app, it’s only actually available in 16 countries and 8 languages. Seeing as how we’re on the subject on numbers, let’s stay with it. Upon release in Japan, the three days that followed saw the app achieve 1 million users worldwide, then within 24 hours of releasing on the 31st Miitomo had achieved 3 million users globally. Within four days of Miitomo’s release in the United States, there were 1.6 million stateside users. Lastly near the end of April, came the news that Miitomo is now at 10 million users globally, which we already know, but what we don’t know is that since initial release that Miitomo has seen 300 million conversations take place and over 20 million screenshots have been taken within the app and shared. Now I don’t know about you but all that is more than numbers for my brain to register on a weekend, so let’s move on.

Repeatedly Miitomo has been likened to Tomodachi Life and there is a very good reason for that, the team that worked on Miitomo, was made up of the core developers for Tomodachi Life, with Super Metroid director Yoshio Sakamoto supervising them. So with that, let’s talk about the game, yes it like a Tomodachi game, except there is no having to take care of your Mii, because the Mii doesn’t require food, or even changing its clothes on a regular basis, although you can if you want to grab yourself 5 Platinum points on a daily basis, which can either be used in game to buy rewards solely meant for Miitomo, or on My Nintendo to purchase any other kind of reward you want.

So besides changing your wardrobe and being able to buy clothes from the in-game shop, or getting them through Miitomo Drop! an in-game mini-game, which sees you dropping Miis belonging to your friends in the hopes the machine will be nice and let you snag the clothing rewards you want and not just the candy at the button. But even with that there’s no real gaming there, because as far as actual gaming goes, it’s all talk and no action because all there really is to do with your Mii is visit friends, answer questions and listen to your friends answers to questions.

You can of course also add friends via Facebook and Twitter and thanks to a new update that is on the way, we’ll also be able to add friends via email too, as well as other unspecified methods. You’ll also now be able to answer questions your friends have, whenever you view their responses and there will be some speed optimizations and the option to edit a Miifoto before posting it as a comment.

Now that all of that has been said, let’s been brutally honest, 10 million+ users globally or not, Miitomo may have been great at first, while it was still new and fresh, but just how many of the 10 million+ users are still playing Miitomo and using it on a daily basis? Then why you’re pondering that, just how many of those users that are left, do you think are using Miitomo because they still actually like the app? Because in all honesty, Miitomo is the only game/app that Nintendo have out this very moment in which we can get Platinum points from. Should there be others, you can be sure Miitomo would see fewer users using it daily, but then we come to the one good thing Nintendo are doing with Miitomo, it’s not the finished product but an ongoing project! This update we have on the way, it’s not going to be the last one and the crossover event we had with Splatoon won’t be the last either. Miitomo is going to grow and that’s great because if it didn’t, Miitomo would soon run out of appeal.

Although I do need to correct myself, although the Splatoon/Miitomo crossover (which was kicked off on Twitter,) the fun isn’t over because from Splatoon inking its way onto Miitomo, Miitomo now sees itself implemented into Splatoon thanks to a huge Splatfest that is on its way! But given as how this is the 30th anniversary of The Legend of Zelda and the 20th anniversary of Pokémon, was Splatoon the right choice to be the first large crossover? The answer is of course yes, because as popular as Zelda, Pokémon and even the likes of Metroid and Mario are, right now Splatoon is huge and it is still new! (Not to mention popular!) Nintendo are heading in a new direction, not just with launching games specifically for the mobile devices, but with their games as well, so as nice as it would be to make our Miis wear the garb of the Hero, Splatoon was simply a must and a right choice, but unless a new mechanic or means of gameplay arrives via an update in the future, these crossovers will need to continue on a regular basis and in this case, regular is bi-monthly.

Personally for me, I would rather a new gameplay element, something like another Miitomo Drop! but something that actually involves us doing a little more, or at the very least, enable us to make the questions better by letting us have a certain amount of customised questions we can create and ask our friends. Should Nintendo make that happen, it could be made as another mission that awards you with Platinum points provided so many of your friends answer your questions in a single day and/or create a new question every day.

Miitomo may have been great to start with, but right now it’s just good, so unless things are put into action and Nintendo incorporate new elements to keep the game relevant, the numbers of daily users will drop dramatically over the next couple of months. Sure that’s not much of a problem because Summer is around the corner and beyond that is Fall, the season in which the next two mobile games are expected to release but Miitomo is the starting point of a new future Nintendo are building for themselves. It is something that will stick to memory whenever we think of “Nintendo Mobile,” and sure you can argue that if Miitomo doesn’t set that high a bar, the future titles can easily look a lot better and its true, but being so as Miitomo is a product of Nintendo and the beginning of their new endeavour, Miitomo needs to be great and remain as such. For a year at least anyway. So in conclusion, just what does the future have in store for Miitomo? Nothing at all if Nintendo drop the ball with Miitomo and fail to regularly maintain it with new elements and events.

One thought on “Let’s Talk About: Miitomo (Where does it Go from Here?)”