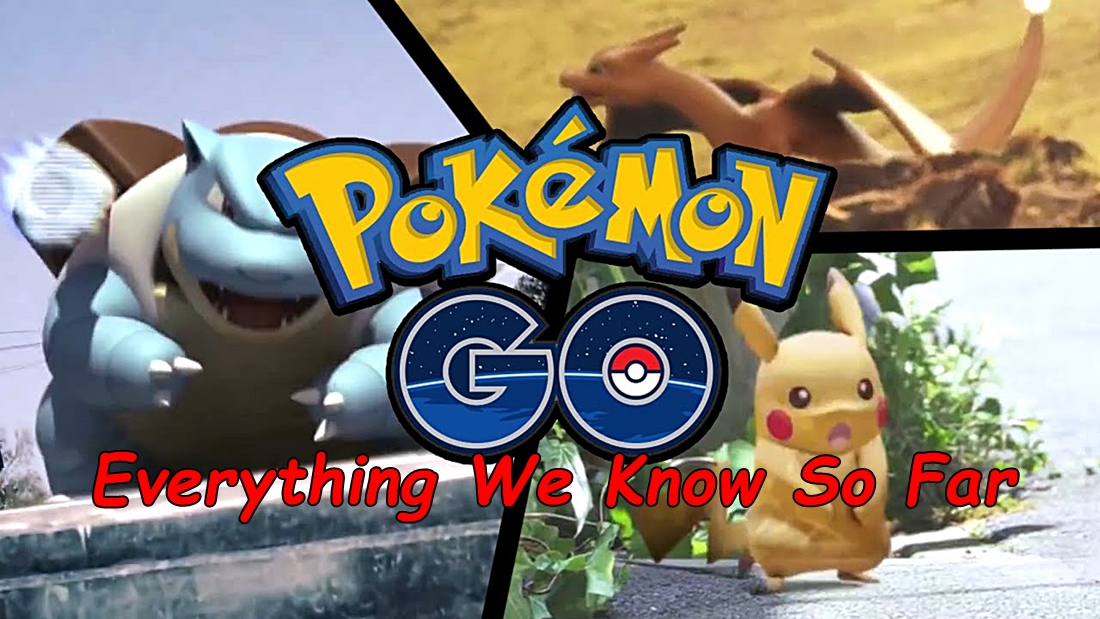 Everything we Know about Pokémon GO

With further details and the release date of Pokémon GO still eluding us, maybe now is as good a time as any to go over everything we know. With so many snippets here and there all across the internet, it’s time there was a place we can go to see it all in one place and this is that place, along with a boatload of images and footage.

Firstly, what is Pokémon GO? Well it is to be one of the latest instalments in a series, which celebrates its 20th anniversary in this month of February. Except instead of being a game you can play on your Wii U or 3DS, you can play it on your phone, thanks to an app, which is being developed by the Pokémon Company and Niantic, the company behind the augmented reality game Ingress. Ingress was available on both Android and iOS and was something of a hit. The app will once again be available on both Android and iOS devices and is a classic Pokémon game, except this time the region it takes place in, is yours. We are the trainers and our surroundings are now the home to many different Pokémon.

Pokémon GO is an augmented reality game that uses our phones to show us if there are Pokémon in the area, Pokémon we can catch, train and use to battle other trainers.  A game in which our rivals can be our best friends as we work together to take down a much more powerful Pokémon, such as Mewtwo as seen from the trailer. It is also a new Pokémon adventure where there will be Gyms available across the countries of the world, most likely places like the new Nintendo NYC shop, the Pokémon Centre in Japan and our local GAME/GameStop/ EB Games stores. Gyms will be the places to go as they will enable us to train our Pokémon, be it a lot faster or just in general as there has been no official comment on just what kind of “training” it will be.

As well as catching Pokémon, you will also be able to trade them as well, which will come in handy because where we all live in different places across the globe, the type of Pokémon we’ll all be seeing, will differ from each other, as those of us closer to the forest are more likely to see grass and bug-types, whereas those of us who are by the water will be seeing a lot more water-types. Essentially, location is everything, so although you may not be able to catch the Pokémon you want, at least you can trade for it.

The game will not be coming on its own as it will also have an additional gadget available, although unlike the game, which will be free to start, you will need to buy the Pokémon GO Plus, a device which you can wear on your wrist like a watch. The “smartwatch” is not a requirement for the game, just an offered option to make your experience somewhat easier as the Pokémon GO Plus is able to connect to your phone via bluetooth and will tell you if there are Pokémon in your area by vibrating, without you needing to be checking your phone every five minutes. It can also be used to perform in-game actions as well, but please note from what we’ve heard so far, players who do want to play Pokémon GO, your mobile device will need to be connected to the internet, so have fun and play to your heart’s content, but just make sure you don’t rake up a huge phone bill.

Now as far as the game’s actual release date goes, there has yet to be one, although there have been plenty of rumours that have been flying around since the beginning. First it was the game will release in November, then December and then in February for the anniversary, but it is not happening. In all likelihood, the mobile game will not be arriving until end of Spring/start of Summer and that’s okay, because as long as the game plays half as well as it does in the official trailer, then the game will be worth the wait because Nintendo and Niantic are on to a winner. Now sure it is tedious waiting for a huge news reveal for the game, but it’s no different to all the Zelda fans who are still left waiting for details regarding the Wii U’s missing Zelda U, but at least Nintendo aren’t trying to hide its details from the world, they’re just giving it to us in really small doses, which includes their Pokémon GO ad they paid $5 million dollars for, just so it good be showed at the Super Bowl. The ad had a good message to it, “I can do that,” meaning “You can do that,” be a soccer player, football player, or even just a Pokémon Master, but you can do that and with those words said, for anyone who missed the ad when it played during the Super Bowl, you can catch it below.

Still, no release date aside, at least we do know in which region it’ll first and which regions will then follow are they are as follows: North America, Europe and Japan, and then Africa, Asia and South America. Now granted even now, details are still very few but we are over halfway through February and in March, Pokémon GO will be at GDC 2016, where Niantic will be having a 30 minute long presentation on Pokémon GO, where it will be deconstructed during the Smartphone & Tablet Games Summit. These summits are a must attend even for anyone who wants to make a successful mobile game as they talks reveal a lot of vital advice and techniques you don’t want to miss out on. To those who attend the presentation, “Catch ‘Em All: Pokémon GO and Real World Gaming,” will receive some first-hand experience with the game’s augmented reality, will be able to see just what the “world exploration” is like.

On a more sour note, Pokémon GO has recently been the victim of internet scamming. A number of websites have been popping up a lot the last few months, websites where you can register for Pokémon GO Beta, whilst asking for the user’s details. The Pokémon Company is not at this stage and warn everyone that these websites are in fact a scam, so please take this into consideration the next time you see a site to register for a beta test for Pokémon GO. Moving on to good news, the Pokémon Company have announced they are working on major project other than Pokémon GO and yes we all knew they were, it’s just really nice to have them announce it officially. Sure we are sorely missing Pokémon Z, or even just skip that and move straight onto Generation VII, but why not just do both? It’s the 20 year anniversary, why do a Z now and Gen VII later, when we can finally have a game which is both that and more? A game where the logo: “Gotta Catch ‘em All” can be true. A game where it is possible to capture every single possible Pokémon, from the ones that started it to the ones we’ll be seeing in the cinemas this year, Volcanion and Magearna.

Sure a game to that extent would be a major curveball from the established structure the Pokémon Company has in place already, one that has truly benefited them and worked perfectly for all this time, but it is Gotta Catch ‘em all, not Gotta Catch most of them, evolve what you can and trade for the rest and I would just love to see a game where you can truly catch them all and I am sure you do too.

This has been our complete run-down of everything we know regarding Pokémon GO, we hope it has taught you things you didn’t know and reaffirmed the things you did. Thank you for reading and be sure to let us hear from you in the comments.