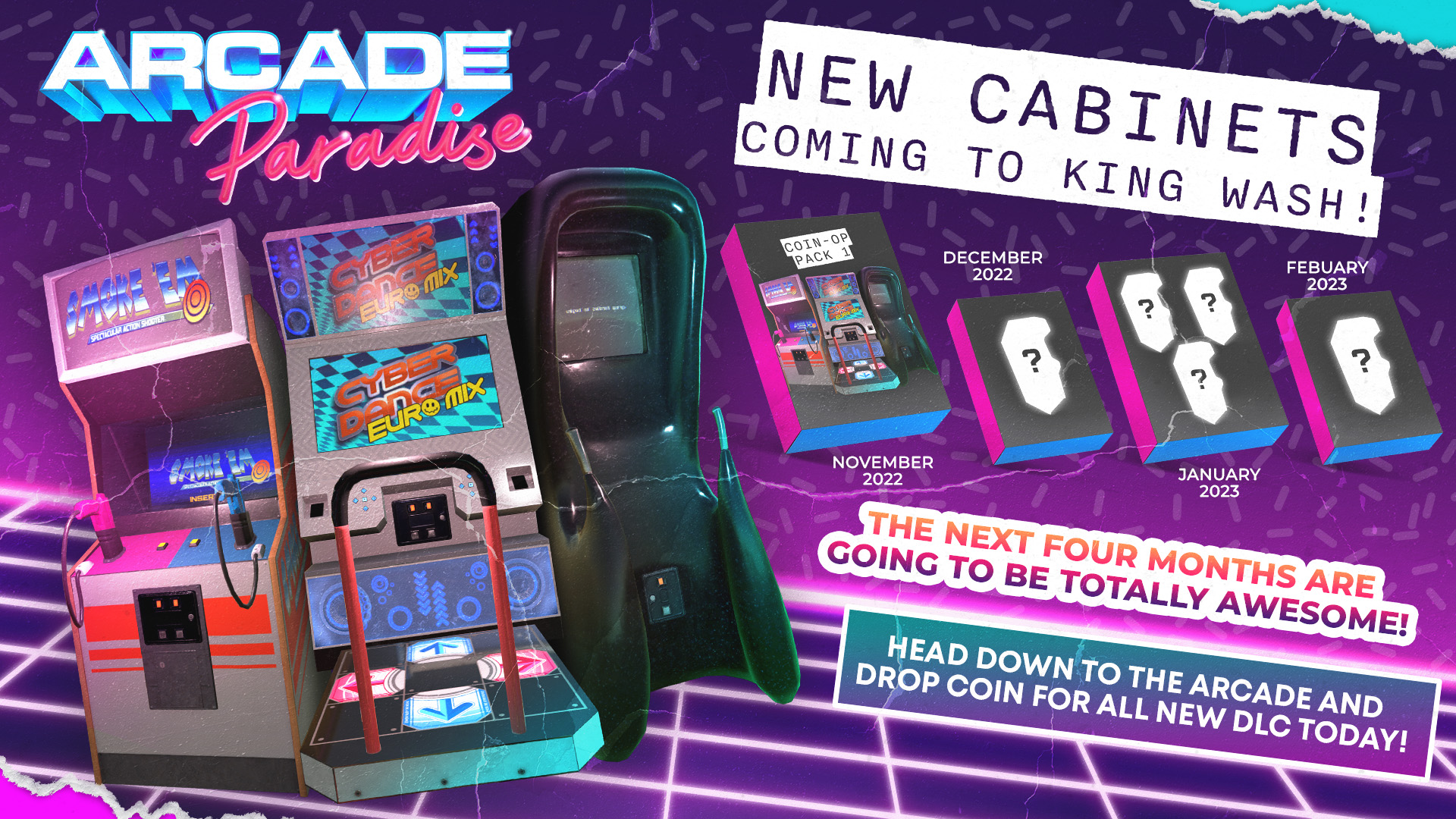 Wired Productions and Nosebleed Interactive have announced that DLC is now available for their game Arcade Paradise. The Coin-Op Pack #1 adds three new machines; Empathy (climbing), Smoke ’em (shoot ’em up), and Cyberdance Euromix (dancing sim) for players to add to their arcades. The DLC will cost $3.99 / €3.99 / £3.49 for the three on the eShop or $1.99 / €1.99 / £1.79 individually. As well as the three arcade cabinets that have are available today, there are even more cabinets in the way in December and next year.

If you would like to know a bit more about the arcade games that are available now, we have an official description of them below. We also have the Coin-Op Pack #1 announcement trailer that showcases the “new” arcade games as well.

Empathy
Time to grasp the handles and ascend the mountain whilst avoiding being hit by rocks from unbelievers. The longer you survive the more points you score. Forsake loneliness. Feel togetherness. Ascend. How high can you go?

Cyberdance EuroMix
If your name’s not down, you’re not coming in. Luckily for you, it is Cyberdance EuroMix is the rave focused follow up to Arcade Paradise’s smash hit dancing sensation, Cyber Dance – with updated graphics and next generation widescreen technology. Pick your tune, then coordinate your movements in time with the beat. The closer to matching the beat you tap, the more you’ll score! Prepare to dance your socks off. For one or two players.

Following on from the announcement of the Coin-Op Pack #1 DLC, Wired Productions also revealed that the Arcade Paradise Double Vinyl soundtrack is now on sale on the Wired Productions Store. It is limited to 1,000 vinyl pressings that comes with an “eye-catching blue and pink design”.

Here is the official details on the Arcade Paradise Double Vinyl

Avid listeners will be transported to the early 90’s in which the game is set, a true love letter to the skaters, ravers, and sticky arcade carpets of a time where arcades ruled the world. Meticulously crafted with collectors in mind, the premium Double Vinyl is limited to 1000 eye-catching blue and pink vinyl pressings and includes a full digital download with bonus tracks too.

The Arcade Paradise Double Vinyl soundtrack is available to purchase now from the Wired Productions store for £35.00.