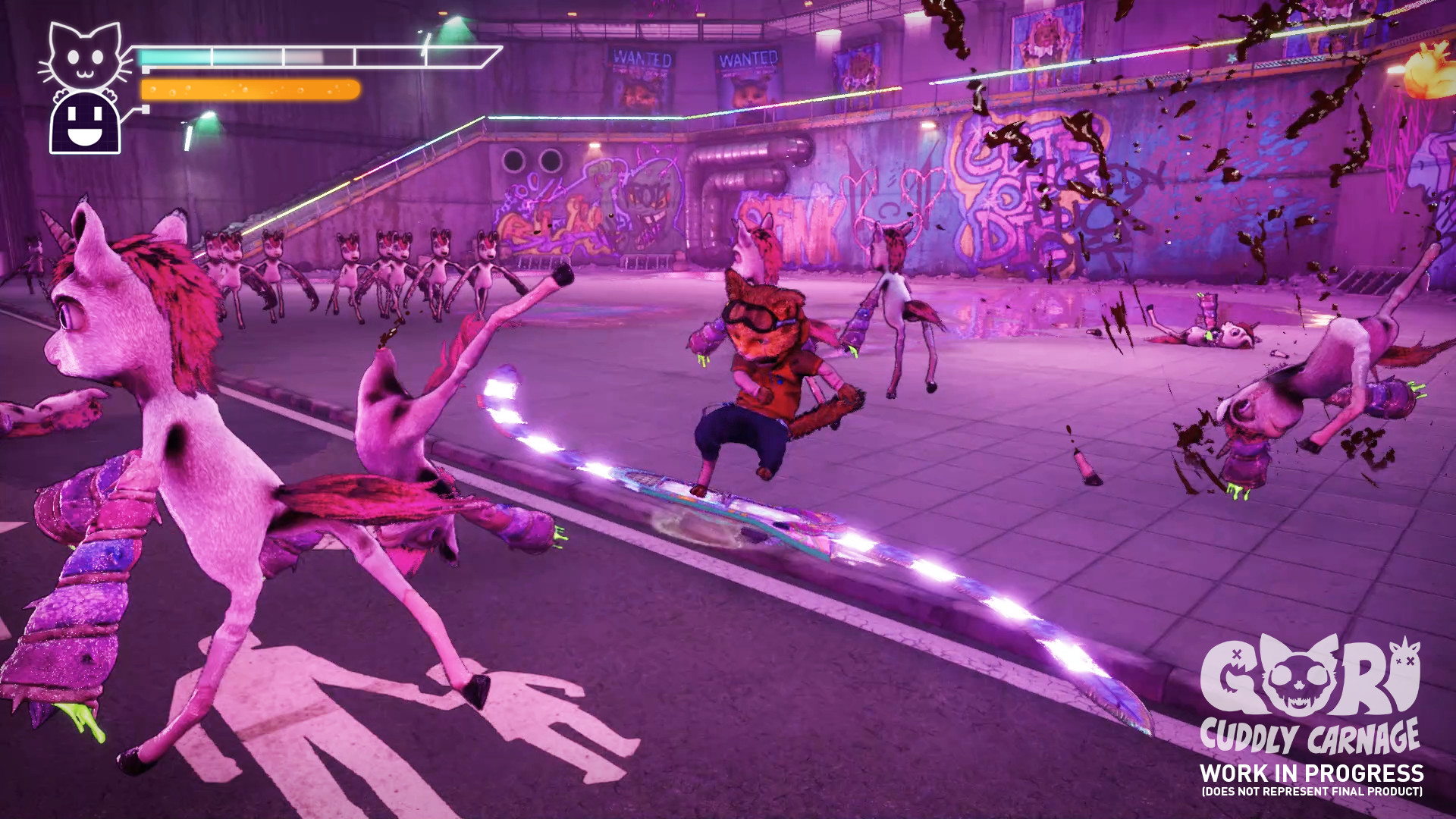 Have you ever sat down with a video game and within the first few minutes, find yourself in complete awe? Your mouth is hanging open. Your body is frozen and your stimulation is through the roof. As a child, The Legend of Zelda: Ocarina of Time was one such game that made me feel that way. As an adult, Final Fantasy X, Bayonetta 2, Xenoblade Chronicles 2 and The Legend of Zelda: Breath of the Wild, would all be games that made me feel that way again and now I have a new game to add to that list, Gori: Cuddly Carnage.

Developed by Angry Demon Studio, a dev team currently comprised of a team of six, Gori: Cuddly Carnage is an action-based platformer that blends high-octane skateboarding focused gameplay with hack and slash gameplay. This results in a very glorious skate and slash style that flourishes brilliantly amongst the game’s futuristic setting, coupled with neon lights and an enemy type most unexpected, unicorns.

Yes, that’s right, unicorns! Welcome to Gori: Cuddly Carnage, a game all about the titular Gori, a ginger cat, his hoverboard companion F.R.A.N.K that is partial to excessive swearing but often censored thanks to a family friendly setting and a whole bunch of murderous unicorns. Gori: Cuddly Carnage is most definitely the game none of us knew we needed but within five minutes of playing, it’s definitely a game that we’re all going to want, which is something of a shame as the game is only confirmed for PC at this moment in time.

Limited platform choice aside, having gone hands on with an extensive demo, easily covering the game’s 20 minutes, love was truly in the air. Not only are Gori’s hoverboard moves exquisitely stylish in their execution, but how F.R.A.N.K doubles as both a compelling method of movement and a ruthless weapon, those evil unicorns stand no chance. Mash buttons, execute combos and remember to dodge at the right times and you’ll be hacking up unicorns like a pro in no time.

How well you perform will determine how many points Gori will earn once battle has ceased but it has to be mentioned that even in a demo of a game made by such a small team, the performance is exceedingly good with a very rewarding pace that keeps gameplay and movement feeling very fluid indeed.

The controls can take a little bit of work in committing them to memory and there are a few areas where the game snags a little, in turns of not being as openly transparent as it could be in terms of some gameplay mechanics, such as jumping into the brightly coloured rails and pressing the jump button again to actually stay on them.

To be purr-fectly honest here, (pun intended) from everything I’ve seen so far from the game’s demo, Gori: Cuddly Carnage does plenty of things right and the things it does wrong, is exceedingly low and just when you think evil unicorns couldn’t be any worse, just wait until two new types are introduced and one of them, is zombie unicorns. Even when they’re already dead they’re still proving to be a nuisance but it’s okay, our adorable hero with his life-like cat noises will show them no mercy.

In short, Gori: Cuddly Carnage is a purr-fectly charming title, full of adorable visuals, vile unicorns, flashy combat that actually pays off and all the humour you could possibly want in a video game. The only problem, is now I need to wait as long as necessary for the full game to released because even though it’s not Switch bound, this is definitely a game I need in my life and to play all the way through. Huge props to Wired Productions for finding this game in the first place.

[Preview] A Very Automated Future with The Last Worker