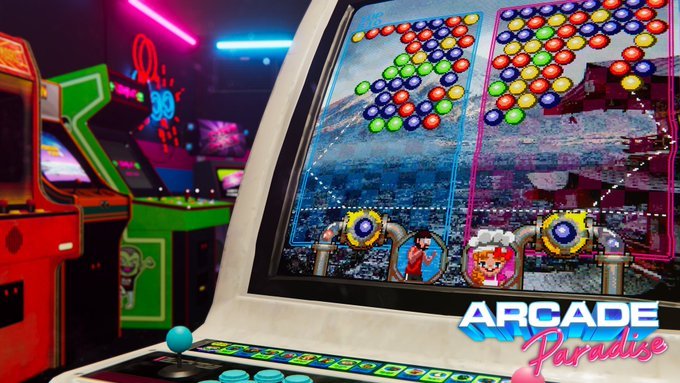 Having recently attended a press event hosted by Wired Productions, I had the pleasure of attending a secret venue in London and playing an assortment of interesting and compelling video games. However, the event would also serve a second purpose as it was also to double as a launch party for the release of Nosebleed Interactive’s Arcade Paradise.

As such, I got to sit down and meet with a few of the developers who worked on Arcade Paradise and shook the hands of a few bandmembers who helped to bring the game’s 90’s inspired soundtrack to life. The best bit of all? Meeting Creative Director, Andreas Firnigl and playing Arcade Paradise with him, whilst getting to ask as much about Arcade Paradise as I wanted to. From the many things that came up as part of our conversation, here are all the notable highlights:

The Story so Far:

Andreas Firnigl: In Arcade Paradise, everything is fully playable and it has been built from the ground up for a modern audience. You are 19-year-old Ashley who works a dead-end job at her dad’s launderette. The father is voiced by Doug Cockle, who also voiced Geralt of Rivia in The Witcher games. In Arcade Paradise, the father is called Gerald and he is on a yacht, somewhere in the Riviera. So, you can see that we don’t take things too seriously.

Tedious Tasks, a Working Laundromat and the Inspiration Behind it:

Andreas Firnigl: We tried really hard to be true to the 90’s in everything we did from our rendition of the MTV logo, to caricatures. A lot of Arcade Paradise is also based on my memories. I had loads of crappy jobs like working on a conveyor belt for three hours cleaning dirty dishes. So, I would make up games like “How many could I do in two minutes?” The mundane Laundromat Simulator ’93 part of the game is based on the crap jobs that we endured. We also went out of our way to add a PDA for Ashley to use, which is a handy tool for accessing the game’s settings and options, such as altering the game’s field of view, which includes a llama based minigame that my daughter created the graphics for.

Despite the allure of the arcade though, we also went out of our way to make sure King Wash was a fully functioning laundromat, complete with washing machines, tumble dryers, top loaders, and a bathroom you will need to clean.

As for the back room in the Launderette, the reason it seems quite weird is because the first ever arcade I went to with my brother was in the back of an old video shop. It wasn’t your run of the mill Blockbusters; it was a proper dodgy video shop with under the counter magazines. In the dingy back room, there were arcade machines and I can remember just walking between them and thinking “What is this palace?” with the endless possibilities of games I could play. I wanted to recapture that moment with Arcade Paradise.

A Tale of Two Modes:

Andreas Firnigl: We wanted to make sure performance was good on all platforms Arcade Paradiise was developed in mind for, so we made sure to feature two types of running modes: performance mode graphics mode. The idea was that graphics mode would look prettier with all the effects at 30 frames per second. As it happens, we have optimized it that much that there is hardly any difference between the two modes except performance mode runs at nearly 60 FPS.

Andreas Firnigl: On the subject of music, although you won’t hear too much of it right at the very beginning of the game as the laundromat is still a laundromat at that point, but the game’s soundtrack was purposely composed to feature plenty of 90’s grunge, hip-hop, old-school rave-styled tracks. So, stick with it, because while all you’ll get in the beginning is elevator styled muzak when it’s still your dad’s show, pretty soon you can get the radio playing and will be able to play a wider variety of music in the background and like I said, the tracks, although 90’s inspired, are originally composed for Arcade Paradise.

Andreas Firnigl: The thing is, like you know there are a lot of games on the Nintendo Switch eShop that are priced at $5 USD, we wanted our games to feel like them, if not better. One of my favourites is Block, which is a puzzle game and I absolutely love it. I implore you to try it when you get the chance. We have all sorts of games playable in Arcade Paradise including couch co-op and twin-stick shooters.

In one particular game, we had up to 300 zombies that you could kill but we had to dial it back to 256 zombies, not because of performance but because it made the game really hard to play. There are 35 different arcade games but there are several different minigames or interactive activities aside from them. Of course, there is also one arcade game in particular, where you can game play a game within a game, within a game.

When playing games like Racer Chaser, you will be able to see the other games in your field of vision because we wanted to replicate that feeling of actually being in an arcade. There are two clear influences in Racer Chaser: Pac-Man and Grand Theft Auto. My old boss was one of the people who worked on design on the original GTA and he always maintained that GTAwas basically Pac-Manwith cars. In the game, you can run around and shoot the cops with your boombox. It is a nod to the best gun in any game, the dubstep gun from Saints Row. You can also collect tokens like in GTA that will turn you into a tank that can run over police cars.

When on a rampage, the police will turn tail and run back to headquarters. One thing that we really wanted to get was the little details like adding a fog shader effect like in the original PSX games. Racer Chaser has a lot of references to games like Pac-Man, GTA, Cyberpunk, Saints Row, and Manhunt.

As for one of the bigger games, it can take up to three hours to complete on its own. It is kind of a daft, wholesome JRPG that has its own systems, shop and power-ups. You can choose Wood Guy who is a recurring character in some of the games in Arcade Paradise. Each game in Arcade Paradise has its own set of goals and will unlock in-game achievements like “Get a combo of 10”. Completing these goals will give you a popularity boost with that machine.

The more popular a machine gets, the more interest it generates. You can set the difficulty of each game for the punters and alter the price to play on the machines. By finding the sweet spot between popularity and price, you can earn around $30 an hour which is much more than the washing machines can make. There are also bonuses like the fame bonus that increases as your arcade gets bigger and you can pay for advertisements with the in-game radio station. The location bonus is good for putting a less popular machine between two popular ones, which could help boost its own popularity.

I want it… tomorrow?:

Andreas Firnigl: You can order new machines to expand your arcade. You can choose between several machines like Strike Gold and Stack Overflow. These won’t get delivered straight away, they will be delivered the next day. The reason for that is when I was a kid and I bought a new game, I would be riding the bus home and flicking through the instruction manual. I would be looking at the screenshots and being super excited. I would then get back to my village and run home and be like “I don’t want any tea, I just want to play this game.” So, I wanted to recapture that feeling of not being able to wait for what the next thing is.

Andreas Firnigl: There was a bug in the game that we have intentionally decided to leave in as you can change your field of view. When playing on the arcade machines, we thought “Should we allow the player to play the games with clean pixel art or leave in the CRT lines so it was as authentic as possible?” In the end we decided to leave the bug in.

For any of our readers who would love to know more about Arcade Paradise, the game is out now on Nintendo Switch and we highly implore you to check it out!

Welcome to Arcade Paradise, the 90’s retro arcade game and light-management sim combo! From cleaning toilets and picking up gum, to doing the laundry; the road to Arcade Paradise isn’t easy, but the reward will be worth the grind!

Take on the role of Ashley and manage the day-to-day tasks of running the family laundromat. Rebel against your father’s wishes and create a games arcade to give the sleepy town of Grindstone something to really get excited about as you wash rags, invest the profits and build your very own Arcade Paradise!

The more arcade cabinets you install, the more players will spend, with over 35 fully playable games to unlock! But remember, you don’t have time to just stand around setting the highest scores… the toilet won’t clean itself and there’s trash to take out!