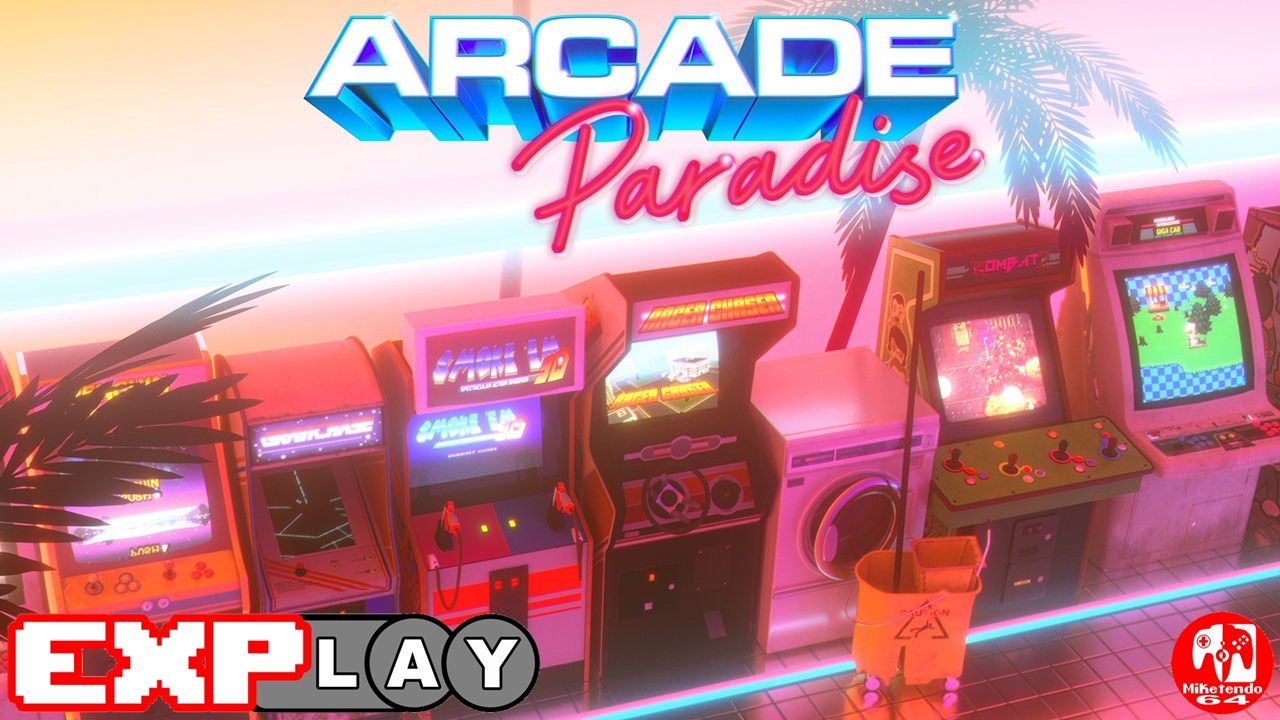 Welcome to EXPlay, (Explain & Play) the review series where we care not for scores but tell it how it is when it comes to every game we get our hands on, whilst also taking the time to include some lengthy gameplay, to give you the reader, the chance to shape your own impressions and views whilst watching and reading. In this installment, we’re covering Arcade Paradise by developer Nosebleed Interactive.

As a child born in the early 90’s, I was not present at the start of the console wars, but I did grow up during it and thanks to an older brother and videogame obsessed mother, I did get the chance to relive the 80’s thanks to classic video games, cheesy pop music, cheesier TV shows and a whole host of fantastic movies that hold up to this day.

Still, just because I was lucky enough to have an 80’s experience and unlucky enough to wind up with a couple of questionable hair styles, not everyone does. Yet, thankfully, cultural appreciation has become more popular than ever and the past is alive once more, especially thanks to the likes of Ready Player One, Stranger Things and a whole host of videogames dedicated to time never forgotten.

The 80’s never truly gone away and now the same can be said for the 90’s thanks to a darling little indie title called “Arcade Paradise.” Developed by Nosebleed Interactive, Arcade Paradise is an arcade management game, comprised of a proper rags to pixelated riches, where players get to play as Ashley and manage her father’s own laundromat, but why settle for washing clothes?

With an absent father, too busy sunning himself in the Riviera, literally named “Gerald in the Riviera,” who’s voiced by none other than Doug Cockle aka the voice of Geralt de Rivia in the Witcher video games, it falls down to Ashley to make the laundromat into a success.

Inspired by the crappy jobs one would typically work in the 90’s, Arcade Paradise is both a love letter to the departed decade and a recollection of memories and feelings by all of those who worked on it. It all starts with a simple first-person view as you control Ashley, in an effort to put a load on, clear up some rubbish, toss it in a rubbish bin outside the laundromat, but then you get your first boss battle.

The toilet is not going to clean itself and you have no choice but to march on in there, pick up a plunger and find that sweet spot. It’s a dirty job but someone has to do it and the toilet humor literally writes itself. Just don’t be alarmed if this segment of the game triggers flashbacks of a certain Conker’s Bad Fur Day character.

After getting your hands proverbially dirty and not physically, (I hope), its time to head into the back office, avoid playing the three available arcade machines for the moment and jump onto the PC to have an message exchange that will lead you to discover how profitable the arcade machines really are.

With an unexpected income before you, the arcade management side of things can truly get underway by ordering your first new machine, which gets delivered the next day. From there, it’s all about gaming and maintenance as Ashley endeavors to clean the laundromat and players get to build their very own arcade. Oh, and don’t worry, not only can you order in 35 different arcade machines, with other minigames also available, but you can also play each of the arcade games, all of them offering different visuals and gameplay mechanics and filled with glorious Easter eggs.

From Pac-Man to Saints Row, GTA, Flappy Bird and Terry Bogard, you truly are playing with power here thanks to a massive line-up of content packed games, which the more you play, the better they will perform in terms of financial success. There are also fun customizable options to make the games harder or easier for your patrons and you can raise the price of each one as well.

From its pixelated beauty, creative gameplay, support for co-op with singular Joy-Con on the Nintendo Switch and original composed soundtrack full of tracks that really capture the essence of the 90’s, Arcade Paradise is truly an unmissable game that you won’t want to stop playing. Besides, who doesn’t want to break the sixteenth wall by playing a game within a game within a game?